Much as it would have been nice to join Pete, Terry et al on their Slovenia trip in early June, work commitments got in the way. Thus we planned something similar for late July/early August. The original plan was to do a week in Slovenia and a week in Austria, but the Austrian part increasingly became a logistical problem and as everyone was enjoying themselves so much on the Soča, we decided to stay there for the full two weeks. 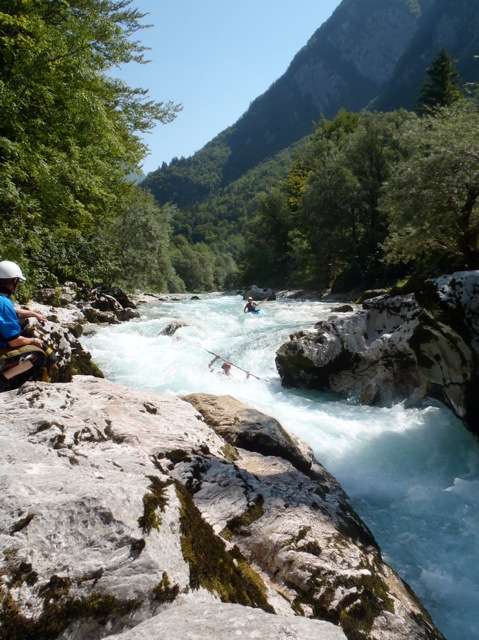 The trip was less Swaledale, only Marie and me being members, more waifs and strays, including two youngsters – Murray (10) and Hamish (8) – and an adult novice (Justine). Most of us arrived on Monday 23rd July after 2 to 3 days drive across Europe, with Nikki and Bill, friends of the Waddingtons, joining us on Tuesday, and Dave and his two boys, Leon and Eney arriving on the Thursday, complete with inflatable kayak. We stayed at Camp Polovnik rather than Camp Toni, for no other reason than it was on the outskirts of Bovec, thus a short walk in for the bread run/bars/restaurants. 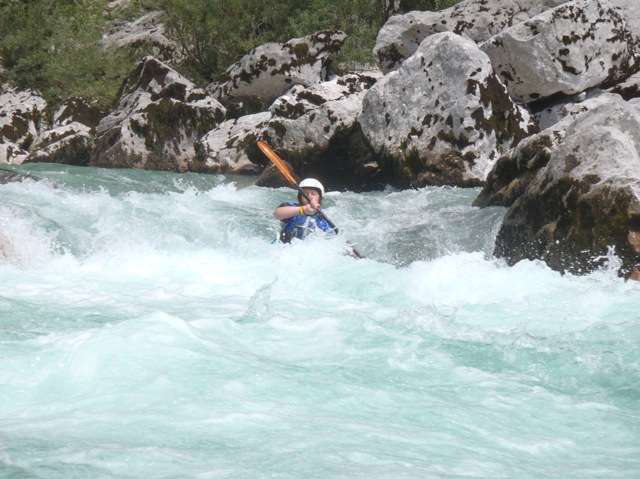 Susie on the slalom section of the Soča

Water levels were good when we arrived due to major storms the week before, so we were lucky enough to get a run in on the Koritnica at the start of the trip, a bonus that we weren’t expecting. We generally divided up our days with easy sections of the Soča in the morning which all could paddle, and then harder sections in the afternoon. Our record for one day was five sections – sounds impressive until you realise that many of them are quite short. In many ways the Soča is ideally set up for mixed ability boating, with grade 1/2 sections followed by 2/3 ones and then 3/4 ones, the only down side being some of the walks in/out! 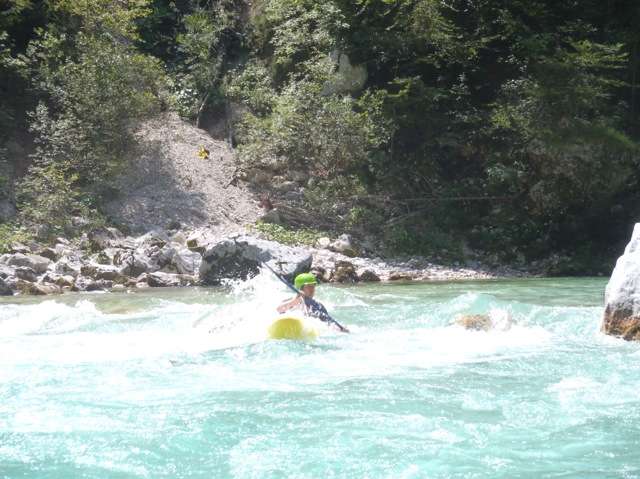 Thus much paddling was done, with multiple runs down most sections, many beers and much wine was quaffed, and pizza eaten. Badminton and volleyball tournaments were also arranged at a quirky bar near our campsite which had these facilities as well as tennis and boules courts, a children’s playground and a giant-sized outdoor chess set!

Highlights for me were the run on the Koritnica – it’s always nice to do a new river; paddling a duo for the first time in 18 years, restoring some confidence in our novice Justine that she can do it, using said Duo; and running the section immediately below Siphon Canyon, which proved to be considerably more interesting than the 2/4 grading that the Soča notes on UKRGB suggested. Combining this trip with the one I was on in 2005 I think means that I’ve now paddled all the white water sections of the Soča. 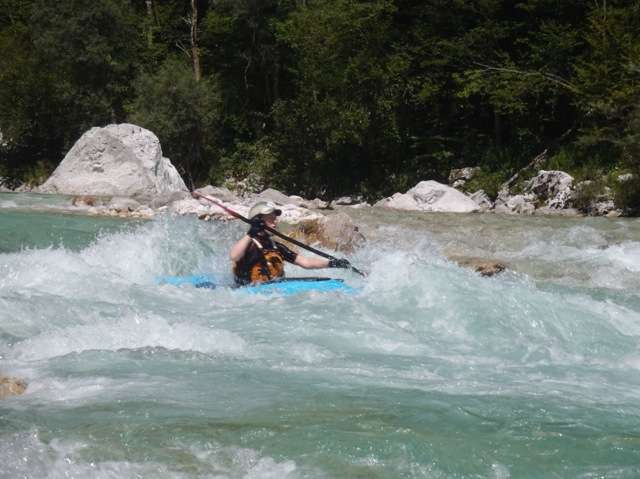 Finally a plea. If you paddle the Soča please remember to purchase your river ticket from the tourist information office. What about the principle of free access to rivers? Sometimes principles have to be modified. Plans were published recently putting forward the possibility of damming the Soča, which Simon Westgarth’s Gene17 circulated last year asking paddlers to contact the Slovenian government to protest at this possibility. While these plans seem to be in abeyance at present, it often seems to be the case that they resurface again some years later. Thus the more paddlesports on the river can be demonstrated to be benefitting the Slovenian economy, the less likely these plans are to resurface. The drowning of this beautiful river of crystal clear water would be a sad loss to the European paddling scene.