As always, there are no river trips in the published programme during the summer months, apart from the odd scheduled Washburn trip - the only vaguely local dam-release. The Tees Barrage was meant to reopen at the end of May (after many delays), but talk is now of their missing the entire summer season and not opening until October - when the rivers should be up. Members have had several days out at the Washburn of which "Children's day" - the Wednesday in May/June half-term is always particularly good value. Club playboaters have also had fun on several days on the Dee at Llangollen, whilst those who prefer river running have enjoyed at least three trips down the Tryweryn (another dam-release option) this year. The Upper Tees provided a day out at the beginning of April, but that's not really high summer, and other local rivers pretty much deserted us most of this spring and early summer. The long dry period means that we haven't got out much and there's a certain desperate craving for a bit of whitewater action if and when it decides to rain, as it finally did towards the end of May.

May saw both of the last two weekends' sea paddling trips cancelled owing mainly to high winds, but there was rain too. Heavy rain on Saturday night promised something worthwhile for Sunday May 22nd, but it stopped raining quite early and rivers in the west had dropped off very quickly. The Tees still had water and it looked as though the Upper Tees would run, probably at low-medium level. A bit of email and last minute texting produced five takers to meet at 9:30 at Newbiggin, but the wind and occasional sharp shower on the drive over, combined with the cold and views showing the river to be a little higher than expected put two of those off at the put-in. Three of us carried down to the river from the Ettersgill layby and were surprised to find the river quite high (and, as it turned out, still coming up). 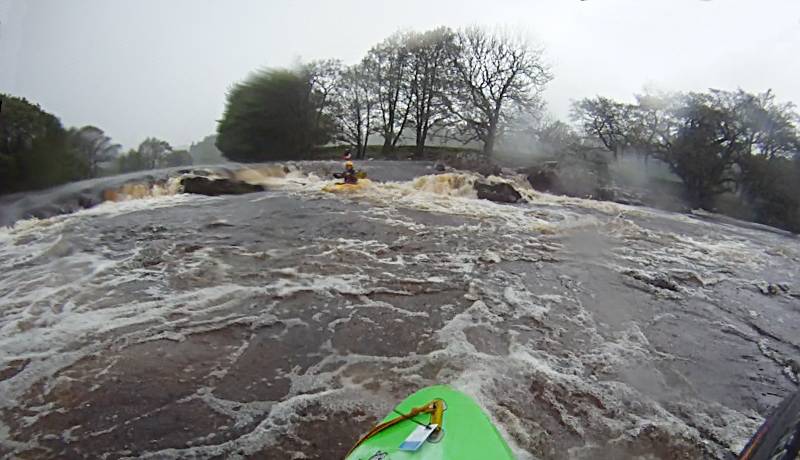 No rocks to avoid on the Ettersgill drop - just big hailstones!

The first drop was a nice swoosh and rocks were far less in evidence than is usual for a summer trip all the way down to Dogleg, which we reached quickly without mishap. Taking out river right to inspect, it became obvious that the level really was quite high - the highest at least one of us had ever paddled the Upper Tees ! There was quite a bit of umming and aahing and a general lack of enthusiasm to go first, but eventually Jim took the plunge in his H3. 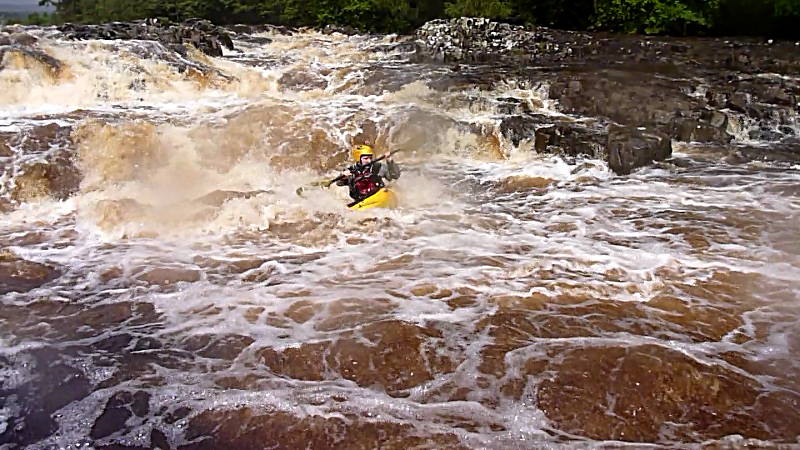 Some big boils waiting for the unwary on Dogleg

The run didn't take quite the planned line and there was some heroic bracing to be seen in the middle, but Jim kept his head dry and reached the bottom safely. I was a bit dubious about running down in the Ammo, having swum several times here on recent trips, and expecting the shorter boat to be a bit more of a handful. Getting the line right on the entry slide is key, and I was slightly to the right of perfect, but got a good edge into the stopper to enter the flow upright, but rather close to the upstream side rocks. I knew this led to a slot I didn't wish to tangle with, so paddled hard to get over to the left. I thought I'd got just the right point for the next drop, but hadn't reckoned with the power of the boil in the middle, which just swung my bow upstream, presenting me somewhat backwards/sideways to the key drop in the middle. At least I could see what was going on, so got the right edge and braced on the right side, quickly turning back to face downstream. The usual dilemma of which side of the big pinning rock to go was absent today - I just paddled straight over the top, punching the stopper and breaking out right with a big grin! Dave got a similar entry line to me in his Solo, but spun a little further, to find himself paddling backwards. A couple of correction strokes had him back on line, down the two middle drops, and almost caught on an eddy line before blasting down the final section. All three down, all upright ! On this occasion we decided not to have another go to see if we could do it more elegantly - there's no call to go tempting fate.

With few rocks, the river is quite benign down to the take-out above Horseshoe (the top fall above Low Force). Mistakes here can be very harshly punished, and we all opted to portage this rather than risk becoming enmeshed in its recirculating stopper. Jim again went first for Low Force, miscalculated his boof but still landed OK. He relaxed a little soon and soon found himself bracing frantically on the eddy line between the two flows below the drop, whilst being sucked back upstream towards the vicious boils on the left. Some hard paddling saw him clear of this and in an eddy at a safe viewing distance. I went next and completely mistimed my boof. Upside down and waiting for the sound of water hammering on the boat to ease up, I soon felt the tell-tale bumping that meant that I was being pushed into the right-hand rock face. I struggled to set up, had one half-hearted go at rolling, then gave up the unequal struggle - at least it's a safe and easy swim from here. Dave also missed his boof, but ended up going left, into the turbulence. No chance of a roll in the stopper, and the current carried him and his boat into the calm shallows between the falls, where he could empty the boat and consider his options. 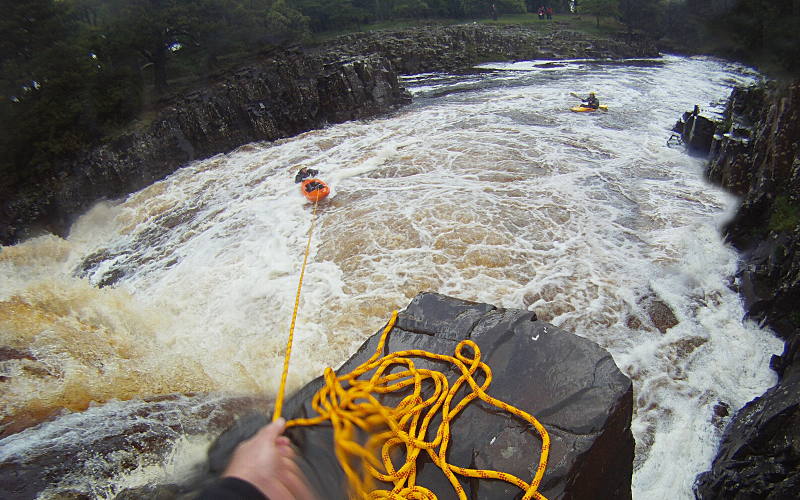 Dave being eaten by the eddy line below Low Force

A 25m throwline just fell short from the usual protection point, so I relocated to the lip of the fall, from where the line reached, but  this proved to be a bad spot to pull him in, since, instead of swinging across to the right bank, the middle eddy line hung onto him and I was just pulling him back towards the main fall stopper. Paying out some slack and relocating to the usual throwline spot corrected this and soon we were reunited on the right bank.

From here it is relatively plain sailing, though a misjudgement of the sideways current on the right-hand line below the Wynch bridge meant that I slid off into the slot. The final drop was easy with enough water to keep well left and still have a soft landing, and we were at the take-out at Newbiggin bridge.

It's becoming a bit of tradition that a spring drought lets up enough to paddle the Upper Tees sometime each May, but we were being a bit optimistic in scheduling a whitewater paddling weekend in North Wales for the end of June - even in Wimbledon fortnight. However, the Tennis duly attracted the rains and instead of dam-release Tryweryn and low-water Dee playspots, we found ourselves with real rivers to paddle.

It rained all Friday night and was still drizzling on Saturday, so we made our way to the Conwy. Inspections of various rapids from the road showed a good level, and the gauge at the put-in showed 6-7 with the water brown and fast. It's not an immensely technical river, but has lots of wave trains and playspots and a few harder rapids. Three of us were in playboats, and three in creekboats. We only had one upset, and that was playing in a really nice hole we found on the way down. A big blind S-bend rapid that we hadn't checked from the road proved to have enough eddies to hop down maintaining line-of-sight, and Bryn Bas Falls was probably easier than we'd expected, but a pre-paddle inspection meant that we knew the line to take, which always helps. 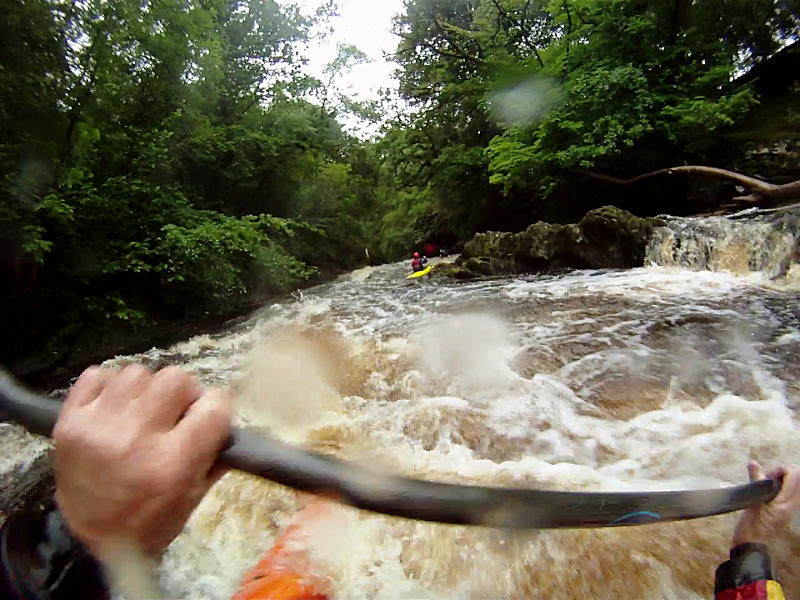 A bit of a carry up from the take-out, and then tea, cakes and a wander round the Fairy Glen to see what fate awaits those who miss the exit. It's fairly terminally awesome !

Sunday was to be hot and sunny, but a check showed that there was still just about enough water left to do the Llugwy down from Plas-y-Brenin to Ugly House. This is very varied, with flat bits, playful waves, a grade 4 section with a reputation (that most of us had not paddled before) and a very serious section which is a compulsory portage. At the level we had, Cobden's Fall was technical, and the drop bigger than it would be in higher water, but we all ran it in fine style, and the kids went back for a second go. That left me needing to swim the rapid to get positions to take video... much to the amusement of a large group of spectators who watched us from the bridge, and then carefully walked round the rapid themselves. 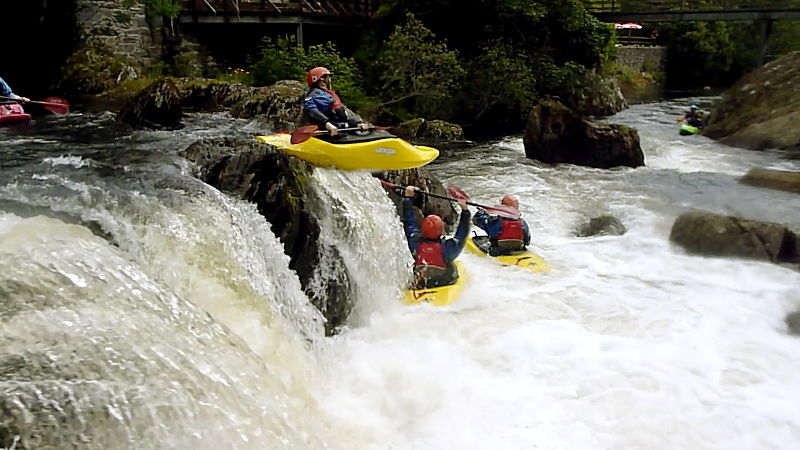 Michael boofing neatly into the aerated water on Cobden's

As to be expected in the sun in North Wales, the level was dropping as we paddled and it was getting a bit scrapey in places towards the end, but Forestry Falls provided one last bit of entertainment with some very aerated water to paddle up to reach a hard-to-make eddy, from which a grabby stopper provided side-surfing for those confident enough to go in.