16th June, mid sea-paddling season, saw us out on the River Wear, and only the second time I've ever seen enough water to paddle further up the valley than Stanhope. Johnny, Francis and myself met up at Wolsingham and were joined by a group of Durham paddlers to make a party of eight. Up the dale, we met up with a small group who had paddled down from Daddry Shield to Eastgate, whilst we put on to the bottom of Rookhope Burn, for a short run down to the main river. Only a short way below is the mean-looking weir under a green bridge where we found a skulkers' route hard river right last time, but there wasn't enough water to do that this time, and I portaged whilst everyone else ran the centre. It's a pleasant run down to Stanhope, then back on to familiar territory down to Wolsingham. So familiar that I managed to relax too much. Right in front of the pub, too. An excellent run for midsummer.

Water levels continued high, and I finally found someone with the opportunity to paddle midweek, so Wednesday 4th July saw me with Thomas Woodstone, meeting up in Bainbridge, having a quick recce, and heading up to Semerwater. The River Bain (England's shortest river) had clearly been higher, judging by the bent reeds that lay beyond the pleasant pools with water lilies, but was nice and swirly as we carefully hacked round the overhanging alders and willows before things started to speed up. It's an easy, but fairly continuous couple of km of grade 2 with a few overhanging branches before an open flat section and then a series of shelves with rocky landings leading up to a final drop under the bridge. This needs shooting far right, but the shelves conspire to present a series of least-lines-of-resistance carrying you left, so these lines need resisting or a determined effort to get right will be needed. After the first drop I found my left contact lens on my cheek, so hastily popped it in my mouth, which did impair visibility a little. I tried the 'go right at the end' approach, failed, and hit the middle of the stopper, which quickly carried me back left, into the bridge wall and stood the boat on end. Nearly made it out intact, but I had let go of the paddle with one hand to fend off the wall, and this rather impaired my brace. Still, it's a short swim to the take-out, and I still had my lens. Until I started talking, then it made a bid for freedom .... 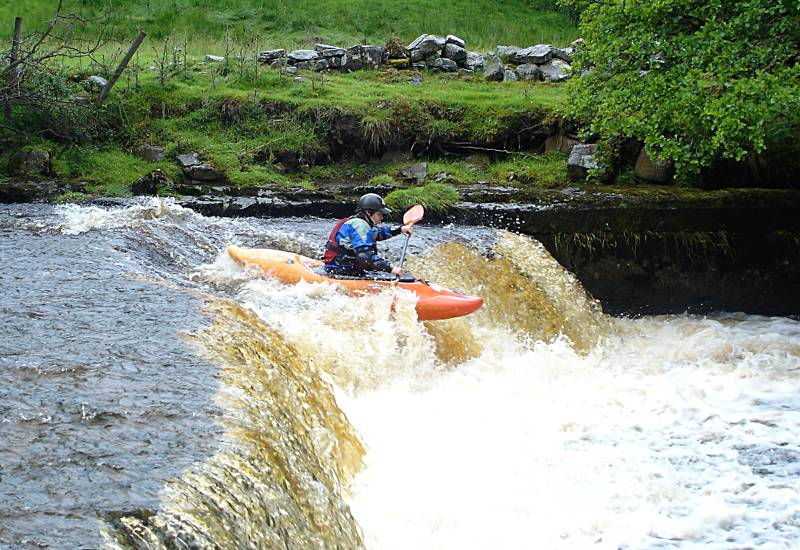 Since the River Bain is only half an hour top to bottom, we looked around for some more exploration, and ended up at Widdale Beck, at the usual put-in for the Upper Ure. There looked to be water, so we headed up to the top and put-on from the bridleway down from Tarney Foss. We knew there was at least one drop, 'cos we had seen it from the road, but weren't sure what else might lie in wait. A bit of a bump and scrape at grade 2 with two livestock fences to duck under being the worst hazards. Soon enough (just over half an hour, in fact) we came to the rock shelf fall we had seen from afar, and a line left proved this to be easy enough, with a flat landing in shallow water. A short way on was a second we had not espied, but this fell slightly more easily to the same tactics. Nothing else of great note to the take out, needs more water next time.

So, two good, short rivers explored in midsummer 2007 - useful things to tag on to the beginning or end of a programmed trip if we are in that area again. I reckon there's a lot more of these little becks to go and explore, too.