Lots of room (and water) at the Inn

The trip to Austria was certainly a success in terms of the amount of paddling we did, and any attempt to give a river-by-river account seems destined to occupy more space than the newsletter has available for several issues in a row, so I'll try to give an overall summary and details on just two or three rivers.

After a long journey across the Netherlands and Germany, we surfaced from our overnight stop and arrived in Prutz fairly early on Saturday. The others arrived not far behind. Most of the paddling is in the Inn valley, indeed, most is on the River Inn itself, and over the three weeks we did most sections of the river including the S-chanf, Zernez, Giarsun, Ardez and Schuls sections in Switzerland, the run down from Pfunds, the Tösens section, the Landeck gorge and the Imst gorge in Austria, each with progressively more volume of water than the preceding section. The only bits we missed were the Brail gorge, the Finstermünz section and the Inn Chute. There was enough water to do the Brail early on, but we hadn't yet warmed up enough to face its numerous uninspectable blind drops, and on return later, it had nowhere near enough water. We weren't even thinking about running the big-volume grade 5 Finstermonster or Inn chute :-)

Since some of the river sections are short (or very fast) we often had two (or even three) runs in a day, and even with a couple of days off, I did 24 river trips - most everyone else did similar amounts of paddling. We made multiple trips (at least six) down the Sanna, a tributary joining at Landeck, and one trip in the last week on the Lower Ötz, which had been too high before half the group went home after the second week. The only river we did out of the Inn valley was the Lech, a long mostly grade 2 bimble which was a bit underchallenging, even for the first week. 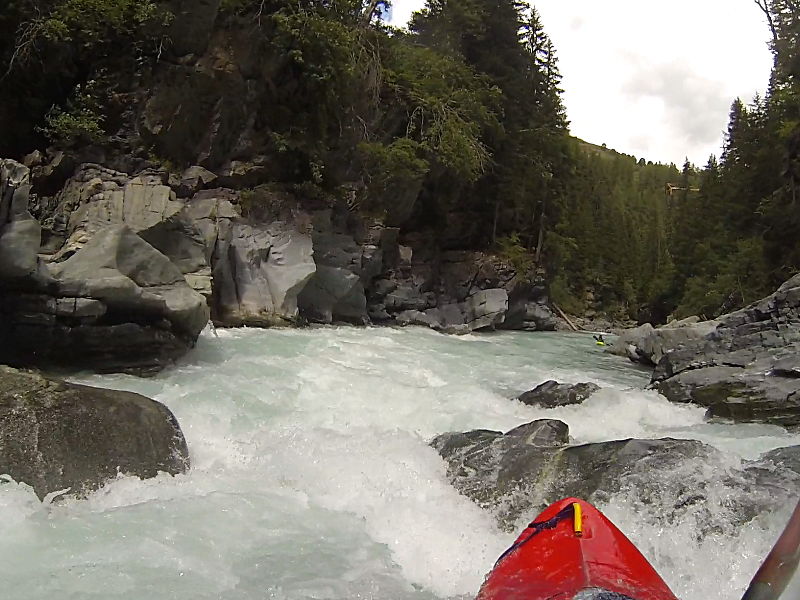 After an easy start, Giarsun suddenly starts to get challenging

The Giarsun gorge was the hardest bit that everyone did (Ardez is harder and there were two trips on that, but only by a select few). This is a gorge section with numerous boulders blocking the view forwards and no shortage of small drops and stoppers to challenge. There is enough of it to challenge the memory, too, so even on the second run we couldn't always remember what came next or the lines to take. One result was Andy being munched by a stopper, to emerge with two halves of a paddle which hadn't been a split. The longer half was a bit of a task to fit inside a boat! 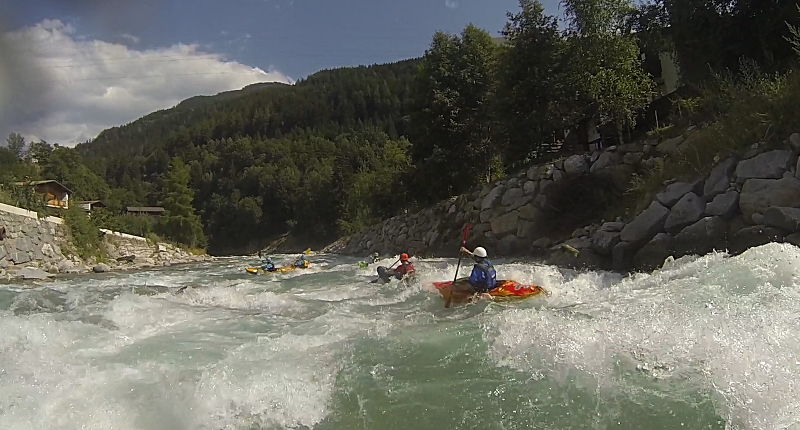 Blasting down a particularly fun rapid on the Sanna

The Sanna was continuous and bouldery, with some fast narrow rapids and good playwaves, but after a couple of trips everyone knew it well enough that it was a blast. The water is less glacial and thus much clearer, and it was sunny every time, so a real fun trip. It could be run in half an hour (if you avoided all the eddies) or played on rather more leisurely, so was good for doing laps, or could be fitted in at the end of day after everything else. 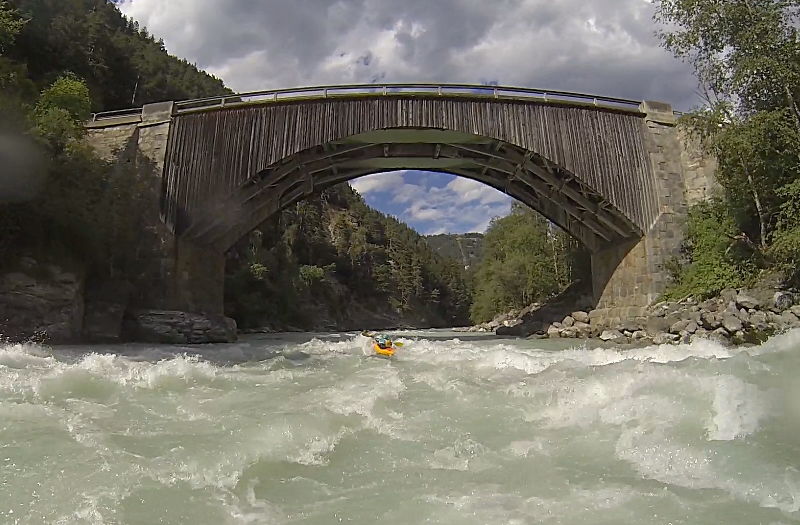 The Tösens section and the Landeck and Imst gorges were all big volume, though dependent on what water was being released where by the hydro schemes. Landeck was the biggest challenge, but only runs midweek afternoons. All three of these bigger bits of river were just as much fun in playboats as in creek boats. Paddling the Imst gorge got us a good look at the outflow of the Lower Ötz, which joins the Inn near the end of that run. We'd gone for a recce of the Ötz in the middle of the second week and found the level a bit high, despite the gauge at the end of the Sickline race course showing "low". When Michael and Andy went back a week later with Lowri, it was a good two feet lower and looked much more survivable. This is a steep bit of river for such a volume, dropping at 18m/km in almost continuous rapids for 8 km to the must-make take-out above the Brunau weir. Even at low water, this took us only 32 minutes on the water, maybe 26 minutes actual paddling - something like 18km/hr ! With the weir (which has been known to hold boats for several weeks and has seen several fatalities) safely behind us, we still couldn't quite relax as the Ötz cataract lay three minutes further on, allegedly at grade 4+. 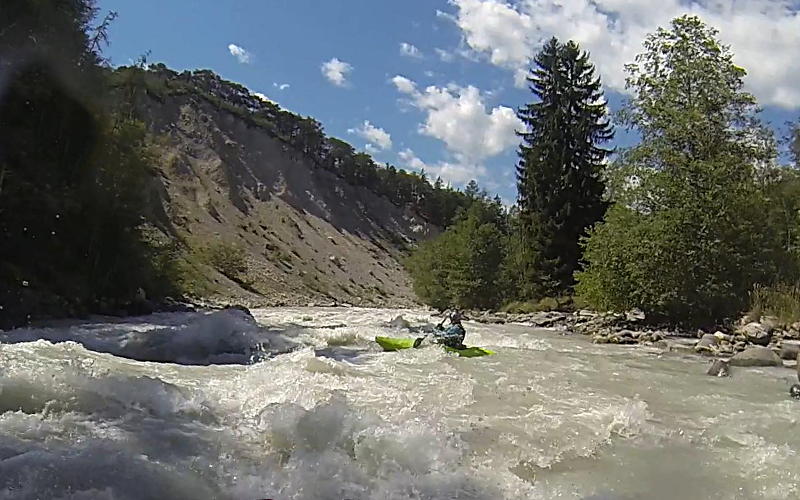 This proved to be merely a slightly steeper rapid with a few bigger boulders and our nerves had been quite unjustified as Andy managed to blast down with one eye full of sediment-laden water and firmly shut... Michael, seen in Andy's aft-facing GoPro, picked a better line and made it look straightforward. High fives at the bottom and a much more relaxed paddle down yet more fast and bouncy rapids ensued, leading us to the Inn and soon to the take-out above Haiming.

There's a lot of good walking, cycling, via ferrata and even summer skiing in the area, and a fair bit of canyonning for which there is an excellent, though expensive, guidebook. However, it proved to be impossible to buy this in the area, and Andy had to resort to mail ordering it from a French website on our return, giving us yet another reason to return to the area another year.