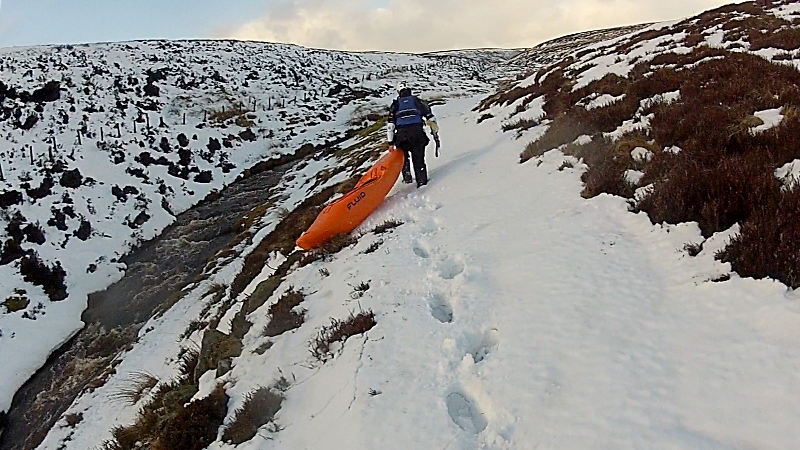 Starting with a lot of lying snow, a big thaw hit on Saturday night, so rivers low down were always going to be big. However, by morning Sunday the temperatures had dropped, so our plan to find something in spate higher up to avoid the pitfalls of potentially long cold swims in the main rivers was looking less likely. The main group (having abandoned the idea of driving across to the Rawthey early on) made its way to the South Tyne, but Dave Peel reckoned we should do our own thing. The Upper Wear looked perhaps a bit big with just two of us interested, but Little Eggleshope was an exploratory classic with just enough water and no major hazards like trees (we thought). 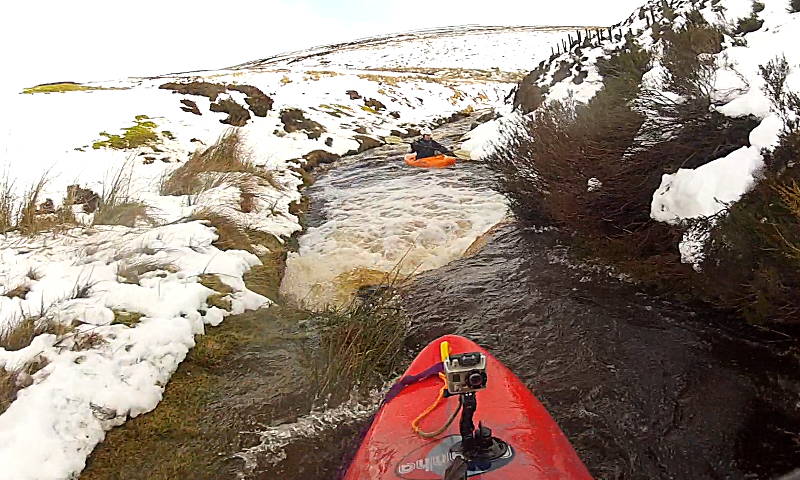 The first drop on the beck - just wide enough !

After shuttling Dave's car to the bottom, we staggered through soggy snow at the top to reach the beck just above a little drop. By the time we reached the water, we'd already got frozen hands, and ten minutes with both of us fighting to get Dave's deck on, then a similar period on my own to get mine on didn't help. Once actually on the water, however, things went better. For a while. It's a bit of a bump and scrape in places and eddies are all but absent, leaving room to get your paddle in the water just occasionally (usually in a frantic stern rudder where there's room for a blade). So when we came round a bend to find a log (with a wire trap for grouse-eating carnivores on top) right across the water with about a foot of clearance, stopping was always going to be a bit marginal. Dave managed it with a few feet to spare, and I tried to turn round to paddle upstream whilst I looked for a shallow enough spot to leap out. However the width of the stream was well less than the length of a boat, so I solved the problem by pinning neatly, both ends embedded in the peaty banks. Getting safely out of the boat was no problem, but levering the damn thing back out again in the freezing water was a bit of a task. 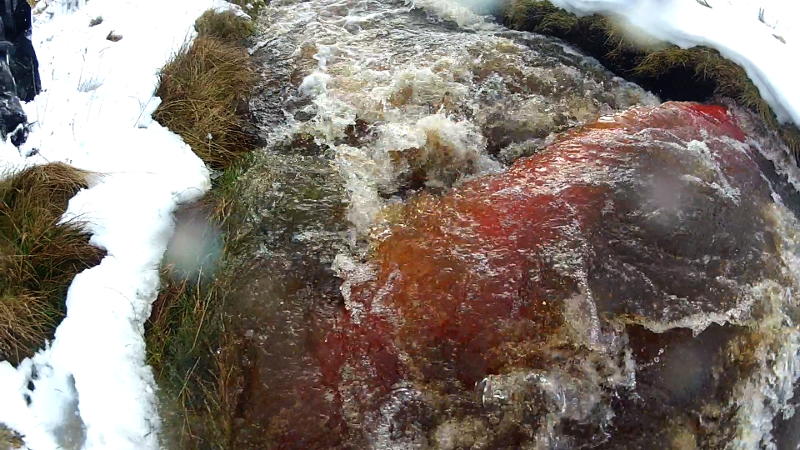 Boat nicely jammed across the width of the flow - oops !

Back on, we soon came upon another one, with an eddy or two to stop and check this time. Dave reckoned he could sneak it on river left, and just got under. I followed, but neglected to tuck my paddle low enough and left it on the upstream side - damn ! Out of the boat (not a swim - it was never deep enough for that) and regroup. 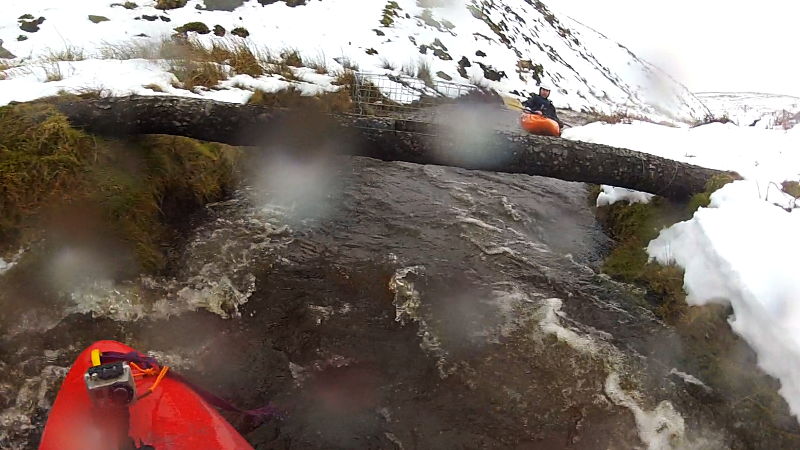 It's about to go pear shaped - that paddle should have gone underneath :-(

Fortunately that proved to be the last man-made hazard (though there were a couple more logs that had apparently washed out and were no longer across the stream) and the rest was pure entertainment - of a perverse sort. Finding purchase for a paddle to steer round the shallows and rocks made for constant active and interesting paddling, with a few thrutches over shallows or grunts to get out of brief pins. At one stage I noticed that I was ahead and on my own, but managed to find a tiny eddy in time to see Dave's paddle heading towards me. Dave wasn't far behind (he'd leapt out of the boat again, since it was pinned), but I didn't manage to catch the paddle as I couldn't let the boat move from the eddy or I'd have been back in the flow, heading backwards with no room to turn... He caught it in the end, managed to get his deck on without assistance, then found his drain plug out and managed to get that back without giving himself a hernia too. 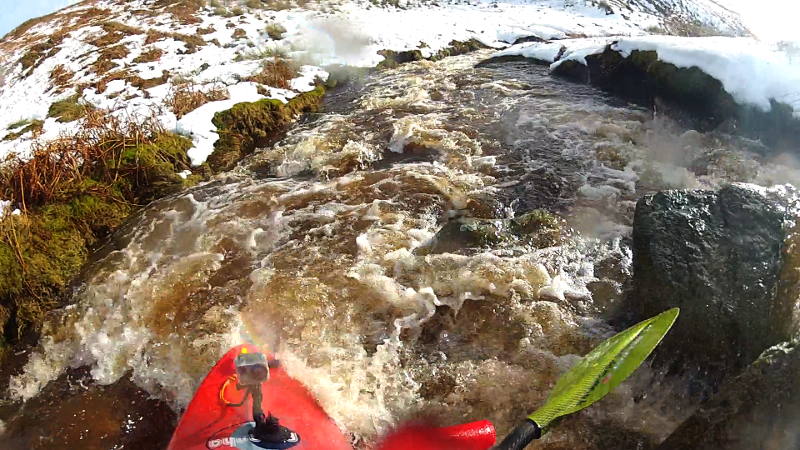 At this point we weren't far from the end, and Dave had seen that there were no more man traps ahead, so we set off again confidently. Dave grabbed an eddy/shingle bank river left just as the road came into view, but I thought to get a bit nearer, then found it too shallow to reach my chosen eddy, grabbed the last possible eddy, popped my deck and then found I was being sucked back into the current before I could get my legs out. 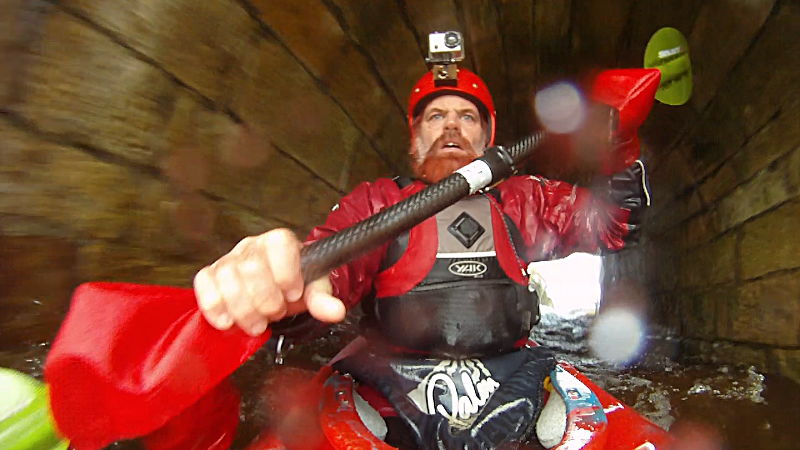 Spot the deliberate mistake: it would have been an entertaining little tunnel and drop - with a deck...

I got turned and paddled under the little tunnel, and over the drop at the far side safely, but with no deck I then sank and had to make another hasty exit from swamped boat. Oh well, no harm done, just a bit of struggle to get the boat emptied and up the steep snowy bank in a strong wind...