We had quite a few people keen to paddle on Saturday following the very wet period over New Year. The Kent had dropped off to a quite nice level, whereas Windermere keeps the Leven high for much longer and this was at quite a chunky level compared to the last time I paddled it (as a fallback when the Keswick Greta was too low).

Once again, we started with a big group (twelve, including six non-SOC paddlers), putting on above Scroggs Weir. It's quite a quick trip at this level, and we only had one swimmer, so we were finished quite quickly, since some people had already planned for a second river the same day. We didn't bother to retrieve the car from Kendal before heading over to Newby Bridge for the Leven. We yet again split into two groups, though we were quite close together (overlapping ?) most of the time. The river is mostly easy water apart from a series of weirs and a few other drops (and one portage round a very serious weir) though there's some fun rapids in the middle, too. None of the stoppers proved problematical, and some even provided playspots. We all took out river right to look at the drop under the bridge at Backbarrow, and I think one or two chose to portage this. I managed to find a good spot on river right almost under the bridge and shot video with a camera fixed to a paddle blade. I think about 50% of us had to roll up (myself included) but everyone came up first time, despite the very aerated water - but there is plenty of time in the big downstream pool. 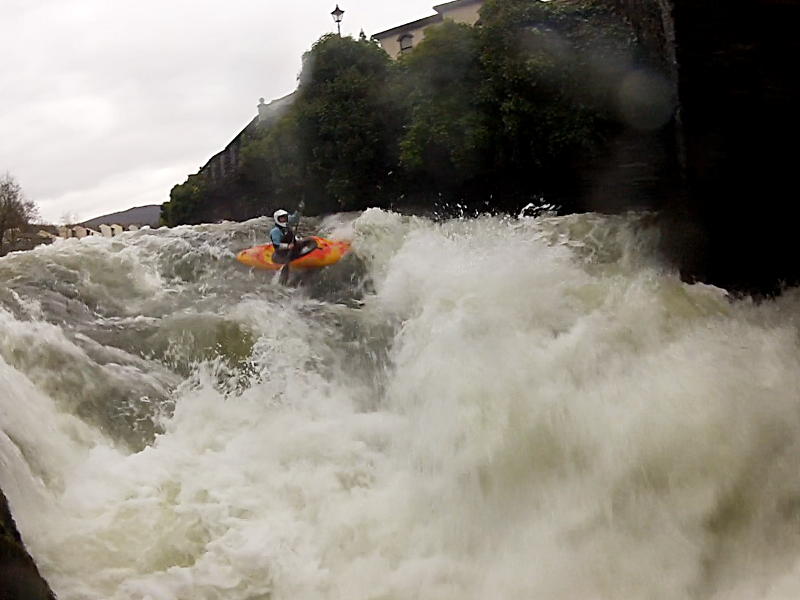 Towards the end is a rapid which had quite escaped my memory, so I cheerfully set off down it in the lead, down the right side of a large island. I was a little surprised to find it was harder than anything I'd recalled this far into the trip - maybe we'd gone left last time, but Dave had always come right and thought there might be some unknown hazard on the left... Everyone else came down upright, too, so there was no problem - just a slight surprise. Not far below this is the take out river left under the final bridge before the river becomes tidal.

Sunday is our more usual paddling day, and the mailing list was in use again to arrange the second trip of the weekend. Levels had dropped some more, and the Upper Tees was a pleasant and sunny venue for Andy, Michael, Dave, Lizzie, Carwyn and Mark. There were several other groups on the river, so it was inevitable that one would have spectators for any mishap. I duly got the line wrong on Dogleg and had to roll up in the boily pool halfway down, and missed every single eddy (there are seven to choose from). But it's an easy carry back (running Dogleg multiple times is a popular pastime) and I made a much better effort the second time, catching four of the eddies. 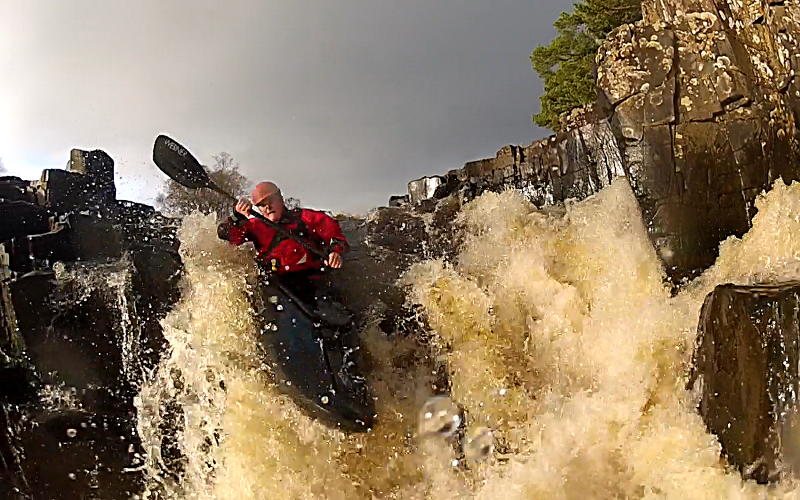 I was being a bit cautious above Horseshoe after my trashing in October, but all went well and Low Force was run multiple times (by everyone in sight, it seemed). Mark and Michael ran Jacuzzi Chute (the left hand fall at Low Force - a grade harder than the voie normale) as well, and no-one even had to roll up ! Down the drop under Wynch bridge and we took out here, since the cars were at Bowlees rather than Newbiggin on this occasion.