Ice Cool on the Eden

Starting the day with some serious ice scraping even before loading the kayak onto the car pretty much set the scene for what was without doubt the coldest SOC trip I've yet undertaken.

Clive had booked a club trip for 12 SOC members as the access agreement for the Eden from Lazonby to Armathwaite must be pre booked. The plan was for most of us to meet up at Bowes to rationalise transport and meet the remaining few paddlers at Lazonby. Arriving at Bowes Clive, Don, Dave, Alistair and Jonathan were already there. Clive already had a list of non attendees (fair weather paddlers?) so we were just waiting for Ann and Mary to join us. As predicted Mary, living the closest, was last to arrive but we were soon on our way with 8 of us sharing 3 cars over to Cumbria with Clive leading. All was going well until we missed the turn off for Culgaith at Temple Sowerby. A quick look at the map and we realised where the mistake had been made so instead of carrying on along the A66 to Penrith we turned and headed for Culgaith. In the icy conditions this wasn't the best decision we made on the day with some pretty treacherous conditions on the untreated roads. We finally arrived at Lazonby after Ann took over as lead car and unloaded our kit in the car park right on the river bank at the put in.

The 3 drivers set off to perform the obligatory shuttle and while we waited for them Mary led the warm up exercise in the car park. Don had already chosen to get on the water and loosen up while Alistair, Jonathan and I went along with Mary's version of "Supermarket Sweep" much to the amusement of the locals using the nearby recycling facility. Eventually Clive returned with Dave and Ann though they had chosen a different route back because road conditions were so bad. Finally on the water and the air temperature was still a balmy minus 3 degrees so the most important instruction was to stay upright and inside your boat. I'm pretty sure this instruction was aimed at Don and I as our track record for staying dry isn't brilliant. 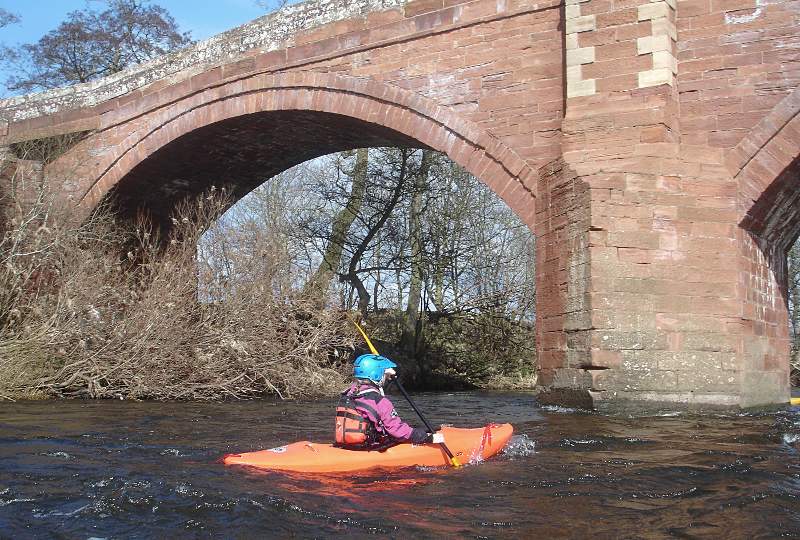 Clive led us off under the bridge at Lazonby with Mary sharing the responsibility of showing us the lines, five single kayaks, Dave and Jonathan sharing a double and Ann in her open boat. Approaching the first rapid Mary suggested we have recap of some hand signals and we all reassured her that we knew (and understood) them though it soon became apparent that we weren't telling the whole truth. That rapid safely negotiated and starting to enjoy the trip, there were fantastic views from the river up to Staffield Hall. Considering the lack of rain and the frozen conditions ensuring no run off from the surrounding land, the river seemed surprisingly big and bouncy with no scrapes at all along the way. 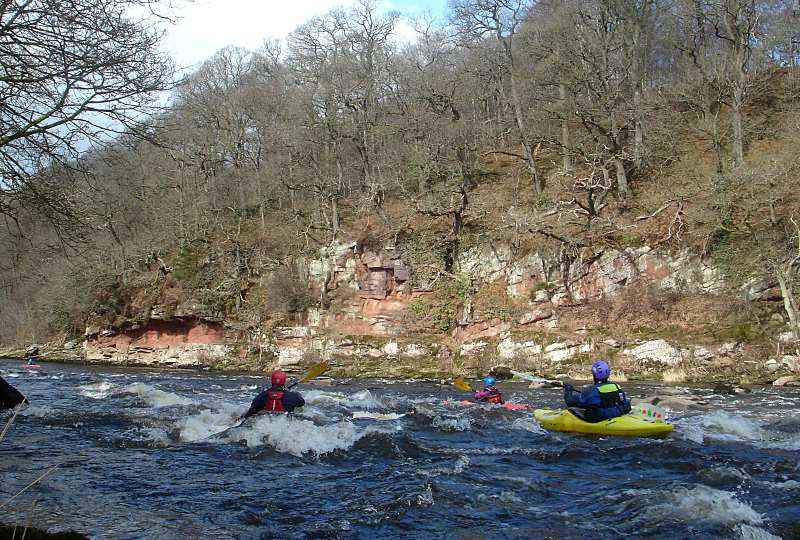 As the river entered a wooded section I started to realise what a beautiful stretch of water this part of the Eden is with the Settle to Carlisle railway running along not too far from the bank and a huge amount of wildlife on and around the water. Still, no time to dwell on the scenery, we were about to be told off in no uncertain terms, not by some fisherman or bailiff but by Mary for not following the aforementioned hand signals.

A few stretches of flat water had us warmed up as a bit more effort was required to make swift progress and after a few more bouncy wave trains we were approaching the last section of the trip. Just before the river turns towards the weir at Armathwaite there are some interesting and unexpected carvings on the gorge wall, an ode to the patient fishermen and some odd round faces can be seen to the right of the river.

Turning for home, and the last "hazard", Clive scouted the weir for the best line. The get out used to be just before the weir but a house has been built/extended to the very edge of the water and the advice we'd received was to shoot the weir and get out about 200m downstream river right at the bridge.

Now I know my hearing isn't great, I had two hearing aids fitted last week, but I'm sure Clive said keep to the left as you drop over the weir. Clive went first followed by Don, Alistair and Mary and then it was my turn. Apparently Clive hadn't said keep left, he'd simply said stay to the left of a rock in the middle of the river. As I took what I was convinced was the right line I was greeted by a concrete wall as I went over the lip of the weir. At that point the advice from two hours earlier about staying dry came flooding back but it was all too late and I found myself in my customary paddling position upside down in the pool at the bottom.

Shaken (but not stirred) and seriously cold we continued to the get out where another logistical nightmare greeted us. A 10 minute walk to get Ann and Dave's cars was followed by the realisation that, with the size of the double kayak and Ann's open boat, there was no way we were going to get all of us and our kit back to Clive's car in Lazonby. Clive set off with Ann to retrieve his car while the rest of us tucked in to Mary's mince pies and generally tried to stay warm.

Back to the full complement of three cars we packed away our kit (I somehow ended up with Ann's helmet and Clive got my spray deck) and we were ready to return with the threat of snow all around. We decided to take the shortest route back to the A6 and then the A66 at Penrith. A stop off at the Llama Karma Café on the A66 warmed us up somewhat as they had the best log burning stove I've ever seen. This coupled with a cup of tea or coffee, or in Clive's case a very effeminate looking hot chocolate, certainly hit the spot.

All in all a cold, tiring trip but one that I'm glad I didn't miss. Thanks to Clive for organising it and to everyone else who made the day such an enjoyable experience.

Editor's note: this article has been illustrated with photos from an earlier trip which was not written up, so if you were there and don't recognise the people, someone who was there seems to be in the wrong boat, or you recognise yourself and weren't there... now you know why !