After a period of intensive planning by e-mail and a couple of team bonding sessions on the Washburn and the white water course, we finally met up on the evening of 25th May to squeeze all our kit into Pete’s van and tie five kayaks onto the roof. The group, consisting of Pete, Clive, Terry, Glenn and Ann, set off in high spirits, sharing the driving and navigating in two hour stints. After crossing the Channel, we drove across Belgium, Germany, Austria and finally into Italy, before leaving the autobahns. After over 24 hours on the road we were all tired, and we were grateful to Terry who drove the final section over the pass from Italy into Slovenia, over steep and winding roads. We arrived at our destination at Camp Toni in Bovec, just as it got dark. The campsite was extremely busy as we had managed to arrive in the middle of a 3 day kayak festival. We were, however, fortunate enough to find a space for our five small tents and the van and crashed for the night.

The following day, Sunday, we had a leisurely start, setting off for a warm-up paddle on the Soča in the afternoon. We got on the river at Boka, for a grade II section, leading on to a grade II/III section, around Srpenica. It was very hot and at least some of us took the opportunity to paddle in short sleeves. The scenery was stunning, with tree-covered mountains and clear water over white stones, which in deeper areas looked an emerald green or blue. The walk out, both length and ascent, were a bit of a shock to the system, but clearly goes with the territory. After demolishing a pan of pasta, we went in search of the bar, where we had a few beers while being entertained by ‘Slovenia’s got talent’ on the tele.

On Monday, after acquainting ourselves with the delights of Bovec, we decided to up the grade a bit. We got on the Soča at Korita and paddled a grade III section before doing a short gorge section, with a drop at the beginning. Ann failed to get the line quite right and capsized, but to the relief of all, rolled at the second attempt. 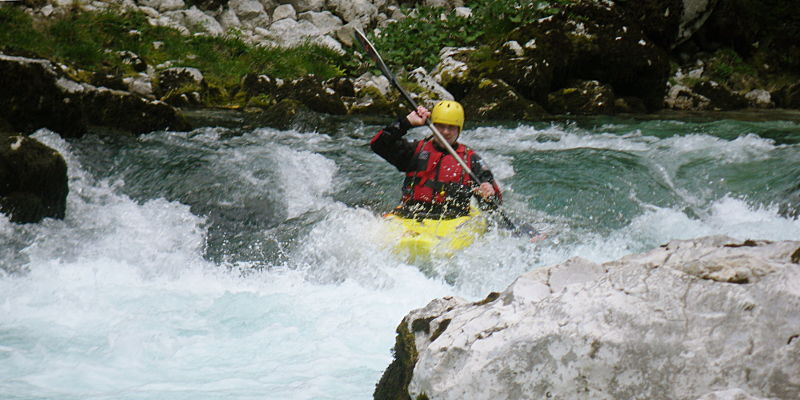 Clive on the Soča

We paddled down to the confluence with the Koritnica, from where we were able to carry the kayaks up into the campsite. It had been a great paddle so we felt it appropriate to down a celebratory beer, before changing out of wet kit (try that in England without risking hypothermia). The next day we felt confident enough to do the Koritnica, from Kluže, down to the campsite. The Koritnica was narrower than the Soča, but with a high flow around boulders making it more technical. It is also stunningly beautiful, in the bottom of a wooded gorge with views up to mountains beyond. We rounded off the day with a really good meal in a local restaurant. 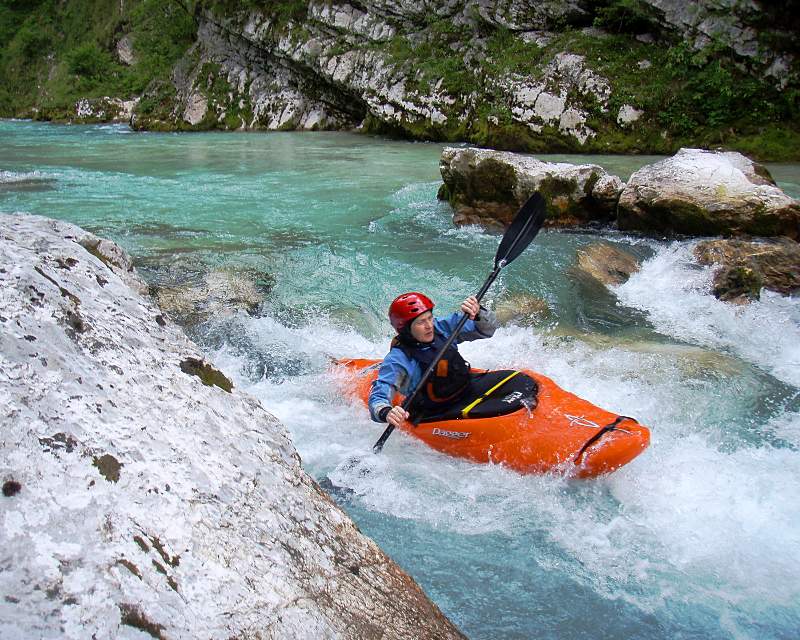 Ann on the Soča

On Wednesday we returned to the Soča, repeating the section around Srpenica, then going on to Trnovo. This last section was said to be grade III to IV, but we thought it was more like III. The river here was wide, but fast flowing with intermittent large boulders and small drops. 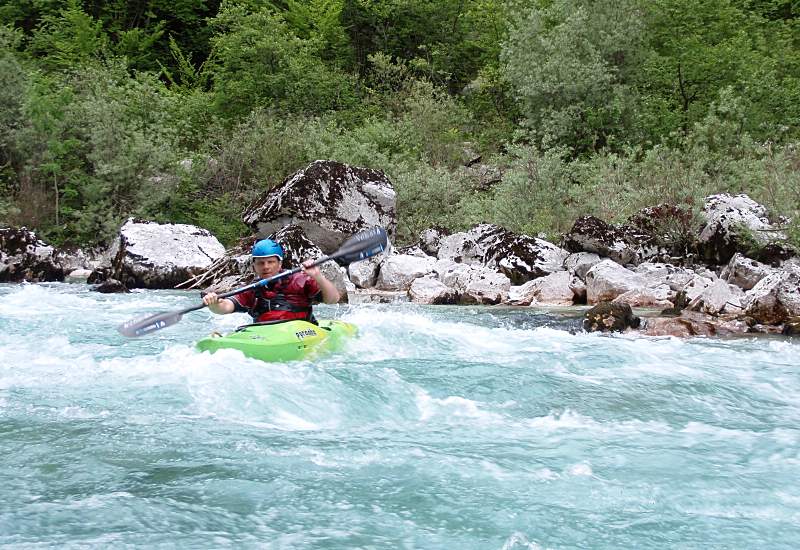 The weather was again very hot, but in the evening a big thunderstorm, while we were cooking dinner, forced a retreat to a kitchen/dining shelter provided in the campsite. The following day we decided should be a ‘rest’ day, and went for a walk up a steep track through the woods to look at a World War 1 fort and gun emplacement. We also did a bit of caving, exploring the man-made caves beneath the fort where the guns were installed later in the war for protection. A thunderstorm on the way down meant that we got wetter than if we had gone on the river. Back at the campsite, we got talking to a German lad, on his own in a caravan, who invited us join him later on for a barbeque. He was equipped with wind surfer, bikes and a kayak which he told us he had only been paddling for 3 weeks. He admitted to falling in quite a lot and rescued himself. Full of bonhommie after food, wine and conversation, we rather foolishly invited him to join us on the river the next day. 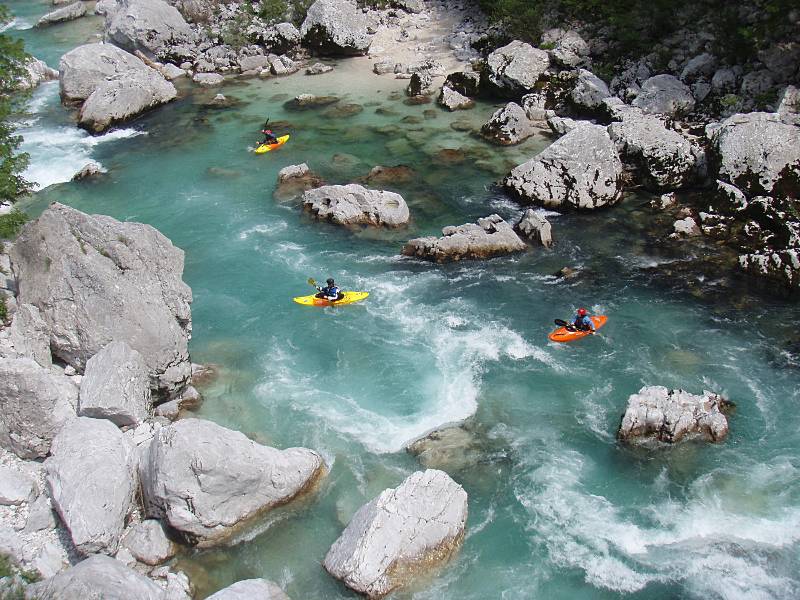 Ann, Pete and Terry on the slalom section

We went back to the Soča to repeat the section between Srpenica and Trnovo, with the possibility of carrying on down the slalom course (grade IV). Andy, our young German friend, was quite right when he said he fell over a lot, but he was quite good at getting himself and his kit out of the water, apart from the time when he and his boat were splatted against a large rock and went in different directions. To be fair, he was not the only one who swam and/or rolled that day, but we were quite relieved when he said he would not go on after Trnovo. We carried on down the slalom course, before walking back up to Trnovo with the boats to where we had left the van.

On the Saturday we got ready early and did a quick run down the Koritnica again, before packing our gear and heading towards home. 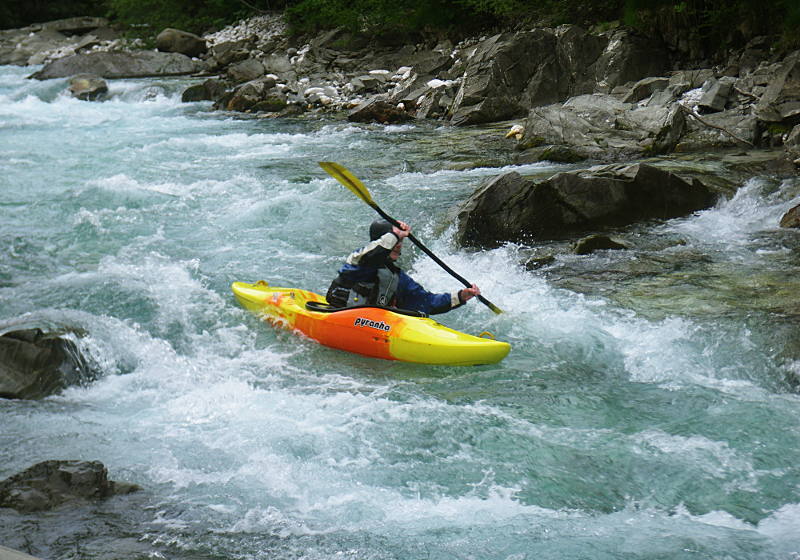 After an overnight stop near Salzburg, we headed for Augsburg, as Terry wanted to revisit scenes of his misspent youth with a paddle down the Eiskanal, an artificial white water course built for the Munich Olympics. Terry, Pete, Clive and Glenn went for a final and rather energetic fling on the course which carries a more powerful flow than the course at the Tees Barrage. Ann had an equally energetic time running along the banks carrying the cameras. We completed the homeward journey, a tired but well satisfied group. 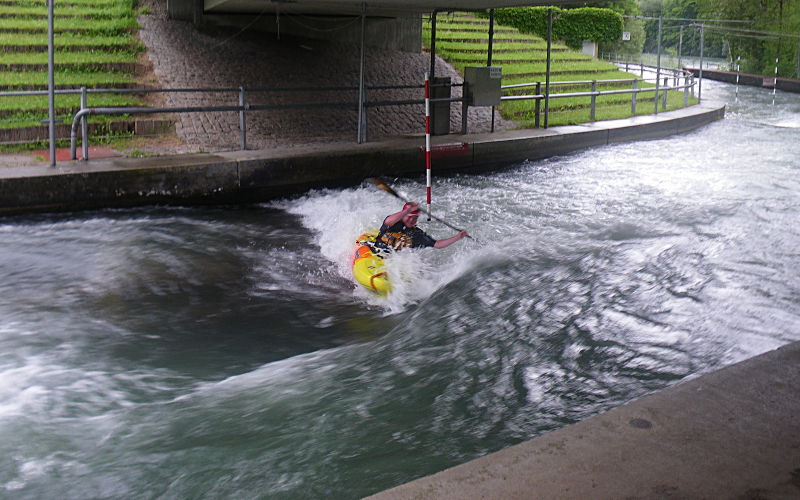 Terry going for gold - or survival, at least...

We found sufficient paddling to keep us going for 6 days on the Soča and Koritnica, and were happy to paddle some sections more than once. The Soča is in the Triglavski National Park. It is a very pretty area with a lot of marked walking trails and some fairly energetic mountain biking. People were very friendly, and we found that many local people spoke English and/or German. It is well worth a visit.