An excursion into Wildswimming - the Tees Greta

The usual January drought was forecast to end and we were watching the EA gauges for our favourite rivers to come up. By Friday, four of us had optimistically decided that the Tees Greta was the river to do on Saturday. The 07:00 update on the gauge said 0.45m on a falling trend - way too low, but the EA was updating the info hourly - always a clue that they expect a steep rise. By 08:00 it was 0.46m, and by 09:00, 0.49m. Jim reckoned that a lot of very heavy rain was forecast for the next couple of hours so we all set off. The Tees looked big at Barney, but when we got to Gretabridge the Greta looked rocky. Pete reckoned the Tees had not looked that big at Whorlton when he passed, but Jim (15 minutes later) reckoned it was huge. This could shape up to be interesting !

We shuttled three cars to Whorlton where the Tees did indeed look huge, decided we could do an extra shuttle if we wanted to go on to Winston, and drove to the put-in at Rutherford Bridge. One look here said it was certainly more than the 0.6m needed to make a decent run, brown and foamy, it was probably about 1.0m. 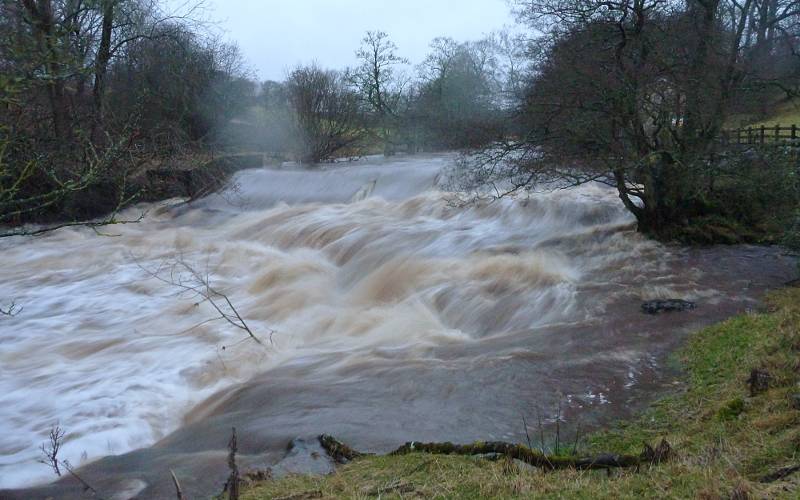 Rutherford weir was a bit lower than this when we put on, this shot being taken after the trip.

We put on below the bridge, as no-one wanted to go near the gauging weir and were soon off at some speed. The little slot drop was not narrow, and not much of a drop, but quite turbulent. First roll to Jim. Another feature that I don't remotely remember from trips in lower water caught me out - one attempt to roll, then I banged my head and decided to exit. Short swim, James got me with a throwline, and the krab on my camera leash also clipped the line to the boat, which wasn't quite what was meant to happen, but did save a chase when I'd managed to untangle it from the trees.

Approaching bends cautiously, in case of new tree hazards, we nonetheless seemed to arrive at landmarks much quicker than usual. The intricate bit above the Brignall footbridge offered a wider passage and even a choice of lines, and the next bit downstream was more washed out than we expected, so nothing too difficult here. Another rapid where boulders usually dictate a line got a little crowded, and my evasive action took me through some saplings which would normally be an island. Interesting, but still upright. Another section where a couple of big boulders usually create a need for swift and decisive manoeuvring (where I've swum before) was noticeably easier at this level, and the long featureless section past Brignall old church rushed past remarkably quickly with no incident.

After this we come to the three islands. In an ideal world, they'd all be easiest on the right, but fallen trees are a major hazard here and a quick inspection was called for where the left side was blocked by one tree, and we wanted to be sure the right was going to be clear. Break out, ferry across and cut close to a large rock, aiming to stay left of the big crashing wave - just ! The next tree blockage was a large trunk right across the right-hand channel. Pete, Jim and James negotiated the little dogleg to reach the left channel but as I followed, I got spun a bit too far, did something wrong and capsized just where I really didn't want to. Determined to take my time and roll up this time, I did indeed come up - only to hit the tree sideways and disappear underneath. Fortunately, there was plenty of room and no branches in the water, so I surfaced quickly and could rapidly self-rescue onto the island. I had the boat on the bank and part emptied before James could get back to see I was OK. It was easier to put back on to the right channel now, and paddle down past the others to the next big eddy where we could regroup. Another bend, and a cliff on the left marked the final bit before the rapids above Greta Bridge. We eddied out right to go and have a look, as there has been a tree across this bit for years, and we wanted to be sure the water was nowhere near it.

In fact, there was no sign of the tree, and though the rapid was intimidatingly big and fast, it seemed to offer no real hazard, and washed through to a relatively calm pool. We decided to run it two at a time, so Jim stationed himself at the bottom with a line, whilst I found a perch midway for the camera. Pete and James piled through on line and avoided the great foam pile crashing against the left wall at the end. Now we swapped as Jim and I walked back up. We noticed at this point that the usual big boulder in mid-channel which had still been showing a few inches when we walked down 15 minutes earlier, was now underwater. Hmmmm - still coming up, then.... 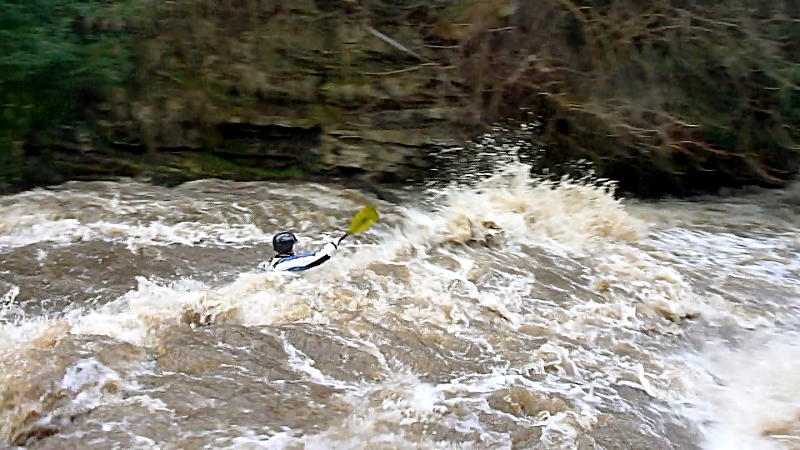 At high water, Hell Cauldron is a series of huge curling and crashing waves.

Jim set off ahead of me, both of us with the idea of going left of the entry boulder - the usual line in lower water. The river wasn't having any of it, however, and we swooshed past on the right with no real hope of cutting left of the rock. A short section of flat, then the narrowing in a series of three chutes with huge curling waves. From the bank I had reckoned the line through the first was dead centre, but rushing towards it mid-river, both Jim and I decided that wasn't going to work, and got past on the left shoulder. I was very certain that the line at the end was as far right as I could get, and immediately started paddling to the right, powering through the diagonal stoppers. I could see that Jim was further left and wasn't going to avoid the final foam pile. He could see that he was heading directly for it and it wasn't going to be pretty. My video shows a very brief glimpse ahead of Jim's boat upside down as I hit the final diagonal wave, then I was through it, but pointing upstream. Behind me, Jim rolled up, cut across right, and had to roll again as an interfering branch had its way. I was busily trying to turn back the right way as I crossed all the boils to get into the eddy. All down, all upright at the end - all good ! 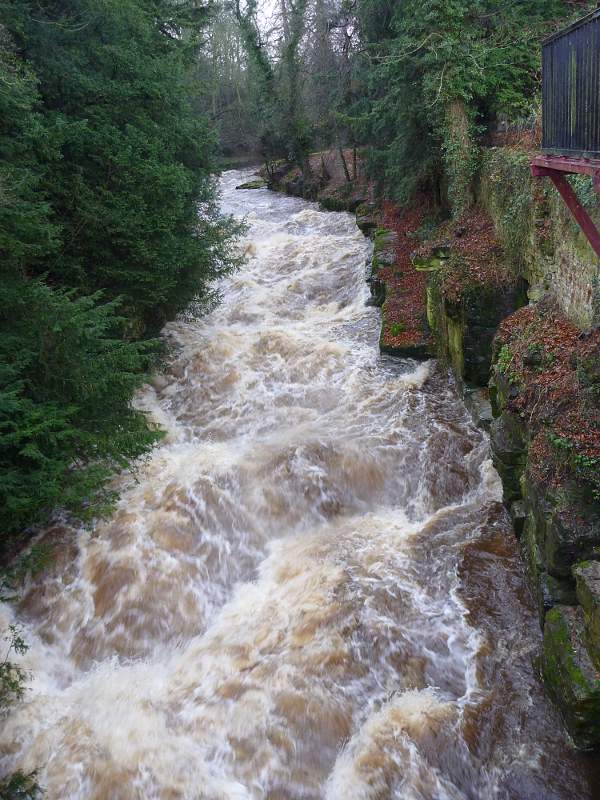 Before passing Greta Bridge we had a discussion about whether to get off here and walk/hitch to a car, since only one of us had actually paddled the final grade 4 part, and that at a rather lower level. I'd been down before, and portaged river left, so had every confidence in either running or avoiding this last rapid. Off we went...

There was a breakout at the bridge, then the river, though not steep, was continuous. An island and footbridge appeared, which I'd forgotten about. There might have been a breakout here directly below the island, but we didn't see it, as we knew we were still a little way off the end. If it was there, it was definitely the last one, as we now found ourselves thoroughly committed with no exit. The river narrowed between rocky banks, and started to get steeper. At least, it felt steeper - I couldn't actually see over the waves to tell what was ahead. Paddle like **** and try to keep in the centre of the channel. 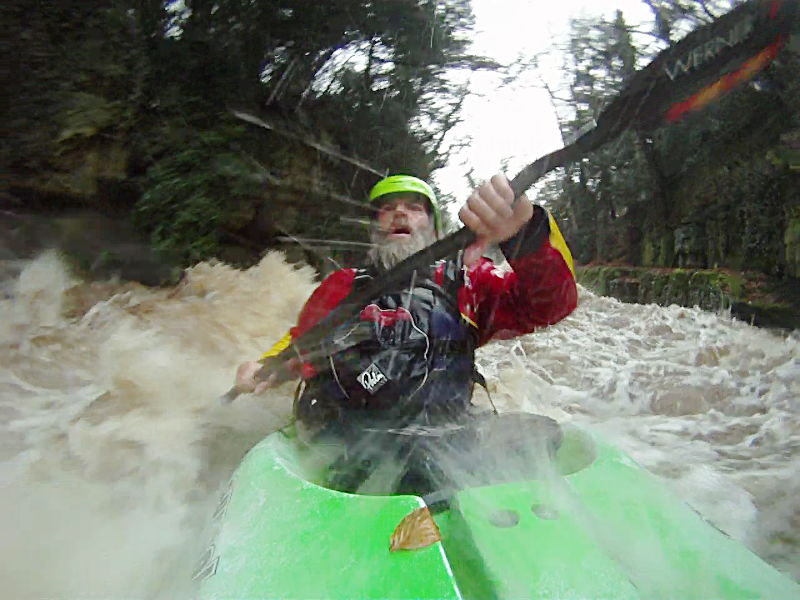 At high water, Rokeby Falls offers no alternative but to aim the boat at something resembling a line and run in hope....

A wave turned me, and I drifted further right than I'd intended. Still paddling and still feeling as though it was going to work, low branches suddenly appeared and caught the top blade of my paddle as I tried to brace. Then it all went pear-shaped, but I came up straight away in an eddy, chucked the paddle ashore, and was able to grab the boat as it circulated round. Shuffle downstream to where I could drag it out then look around for the others. Absolutely no sign.

What I had been unable to see ahead of me was Pete also swimming, but in his case, he continued down into the Tees. Now, with hindsight, we know that the Greta was by this time at 1.25m on the Rutherford gauge, and the Tees was at 1.95m at the Barney weir (0.6 to 0.7m is a nice level). This meant that the Tees was tanking past at about 300 tons of water per second, whilst the Greta added at least another 50.

Meeting of the (fast moving) Waters

It took just over a kilometre for James to find an eddy he could safely get Pete to the bank in, whilst Jim continued chasing his boat for another few hundred metres towards the Whorlton Falls, getting it out on river right with a short distance to spare. Meanwhile, I portaged the confluence, as I didn't fancy that on my own, and paddled the kilometre down to James' boat solo - cautiously, but still only took four minutes ! James appeared as I climbed the bank to see where he was, and we paddled on down to find Jim and Pete getting ready to put back on. Downstream of the confluence, all features of the Tees were washed out, so technically, it was all very easy until Whorlton.

Jim took the brave option of paddling down the left of Whorlton Falls through those most horrendous stoppers to reach the river-left take-out unnervingly near the falls. The other three of us decided that discretion was the better part and got out river right above the falls. In fact, by getting off above the bridge, the worst of the barbed-wire defences are avoided, and we popped out onto the public footpath opposite the Lido.

We had noticed a tremendous noise from the trees as we paddled down the Greta, even over the noise of the river, and here we encountered the final hazard - it was almost impossible to open the gate against the wind, and the cars were surrounded by fallen branches. I decided against carrying my boat and paddle over the bridge - it would be a shame to lose gear at this stage. So I packed James' boat into the car and drove over to get mine, then back to Rutherford bridge to get James' car. Here I nipped up for a look at the weir, whose walls were pretty much submerged (photo above), and which had a most horrendous pair of stoppers on the left where we'd usually paddle. Down the right looked to wash through, but low branches would make that a little awkward and I'd thoroughly recommend a portage if doing the river right from Gilmonby at this level.