Clough and Swale - A Fine Day Out!

Gauges were up, and we had a small but viable group, so we were looking for small rivers that would be in condition. First choice was the Rawthey (again ? so soon ?) but it had stopped raining and by the time we were near Sedbergh it was clear that this had dropped off a bit too much. However, there still seemed to be quite a bit of flow at the take-out, which encouraged us to go and have a look at the other feeder, the Clough, which none of us had done before. It wasn't huge, but the book said certain rocks needed to be covered and they were, so we went for it. At this level, we certainly had plenty of time to look ahead, even if some eddies were a bit small, and we didn't need to get out of our boats at all. The last drop (which had been river-wide with a lot of aerated water at the bottom when we ran the Rawthey two months ago) was a neat boof on the left and very straightforward. My headcam footage all proved usable, so here's the day's first video.

It was now still quite early, so we cast about for ideas and decided we could recce the Swale on the way to something more likely in Teesdale. Despite me going a rather bizarre route via the Tan Hill (there's a road in my mental image of the area which doesn't seem to exist where I expected it) the Swale was still at 0.65m by the time we arrived, so it was a no-brainer that this would be our second river, and a second new river for Alex ! Interestingly, this is the same level on the gauge as on my second trip, but comparing videos shows that it was definitely lower on all the waterfalls and rapids on this trip, which perhaps explains why we seemed to bump and scrape in one or two places that I hadn't expected.

We put on at Wainwath, as the section above that did look a bit scrapey, and we wanted to get to the falls before it dropped off any more. Mike and Alex ran Wainwath twice, whilst I faffed about to ensure I had enough battery power for the GoPro and only ran it once, but it was a sweet run. On to Rainby where the others both got perfect lines, and I was on line, but with the boat on edge slightly which meant I landed a bit sideways, but still upright. A quick inspection of Hoggart's Leap (aka "The Rapid" as it is almost the only bit which isn't actually a waterfall) and we all made neat lines down this too, mine with a boof off the ledge on the right, the others more in the corner. 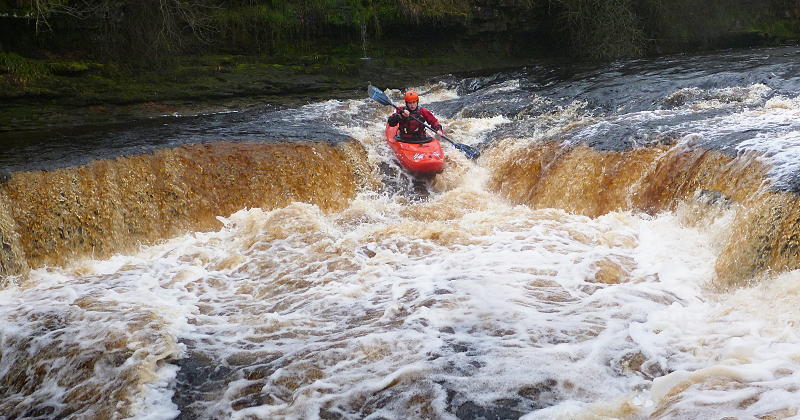 "The Rapid" (Hoggart's Leap), Michael gets the corner line

Catrake went on the right hand side without too much of a bump, and there was still enough water to get on down to Kisdon without scraping (though there were one or two bumps). Michael didn't trouble to inspect Upper Kisdon, so Alex followed his line, and I was not far behind. None of us fancied the centre line on Lower Kisdon, and there wasn't enough water for the right hand side, so we struggled up the bank and walked out from here. The day's second video. 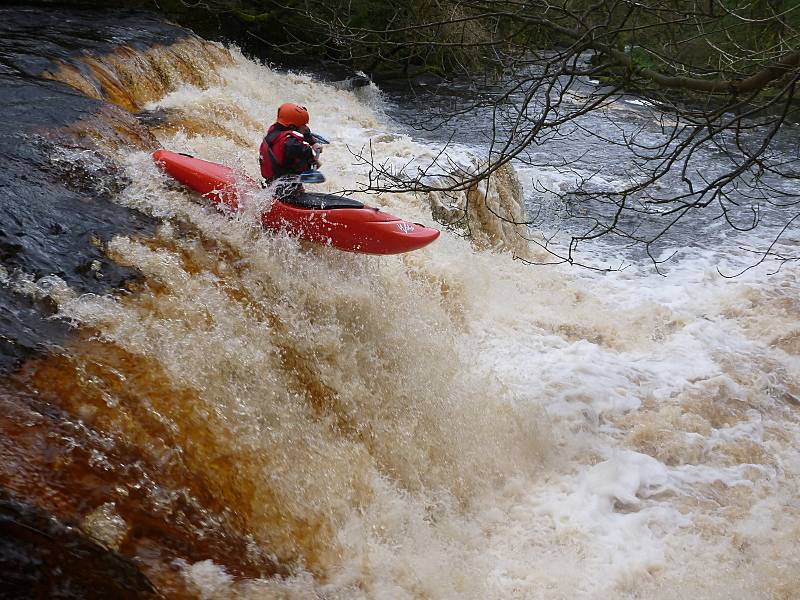 Michael on the top half of Catrake Force