Back to October half term again this year (it was a bit cold at New Year, although we'll be paddling then, too) and only a three day event was planned - perhaps just as well, since water levels were really quite low on Friday (Barnard Castle to Winston) and Saturday (Racing stretch), but came up rather more than we'd expected on Sunday (Upper) - all on sections of the River Tees this year.

We had seven paddlers on Friday, and it was at least as cold as last New Year, so pogies were well recommended. We ran Abbey without inspecting, and some interesting lines (and one swim) resulted. Unusually, I was rather pleased with my line, even though a bit of it was backwards... 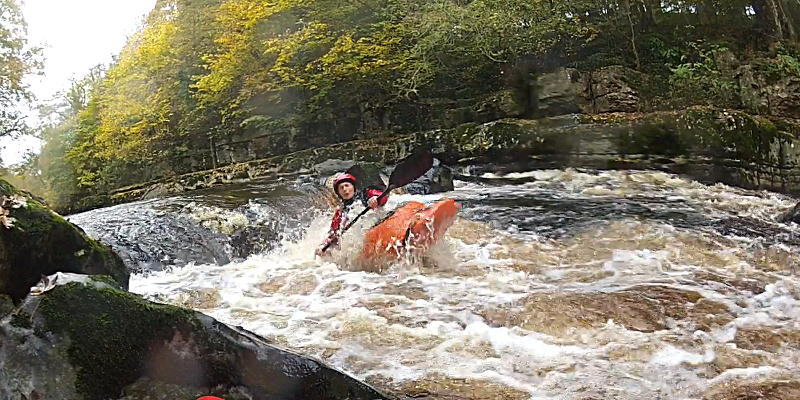 The playwaves between the Greta confluence and Whorlton weren't working at all at this level. Whorlton also provided a number of different routes, but no drama. 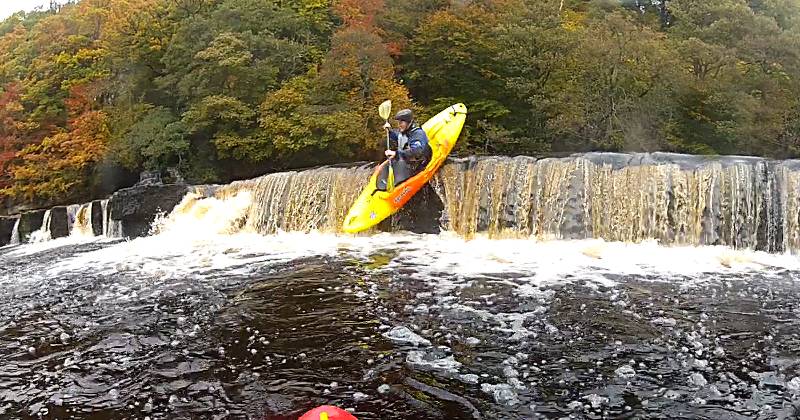 The Wycliffe slab wave wasn't as terminally retentive as last time, but the Grafts Farm playwaves were working well, so there was fun to be had here, and a few rolls. 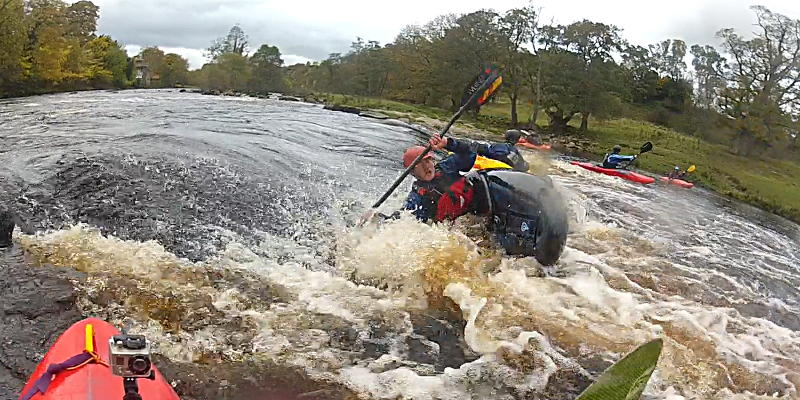 The flat bits probably went on too long, but the ledge drops at the end could be run almost anywhere with impunity. Thanks to Mary, Ann, Alex, Pete, James and Michael.

More arrivals on Friday night, and Bill got here ridiculously early Saturday morning, considering how far he had to travel - hope the inch of snow wasn't too much of a shock! Michael decided it was too cold to paddle today, so we had myself, Mary, James, Rosie, Gail, Bill, Niki, Nicky and Iggy. It was just high enough not to scrape at the put in at Eggleston Bridge, and got more fun as the river narrowed down. Several of us made eddies we'd not been in before on a couple of the rapids. 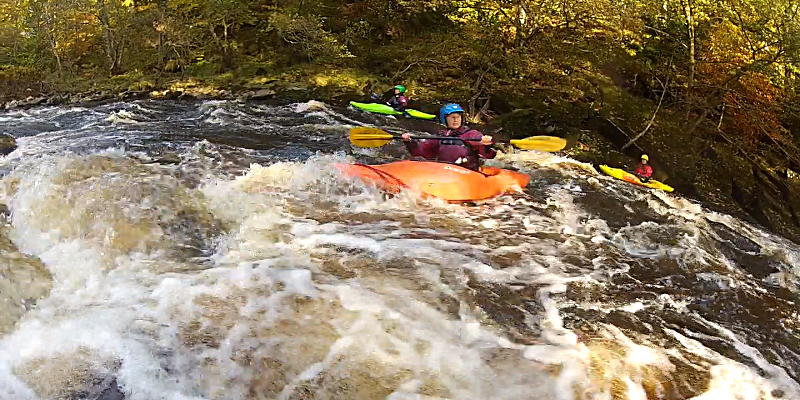 The bottom waves on Fairy Cupboards provided endless amusement doing high crosses. What's more it wasn't as cold as yesterday, despite the snow, and it was sunny ! 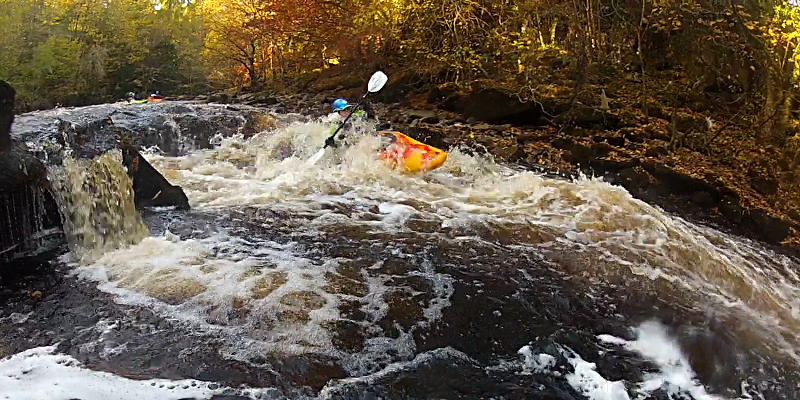 Rosie taking Sarah's Mamba for a spin on the Racing Stretch

On Sunday, the EA gauge told us that the Tees was at 0.52m at Middleton (at 05:45), barely above the lowest runnable level for the Upper Tees. We got eleven paddlers to Ettersgill by 10:30 (easier since the clocks went back, so it was 11:30 by body time) - Andy, Mary, Michael, Rosie, Nicky, Bill, Niki, Dave, Anthony, Pete and James. Two more (Brad and Phil) caught us up shortly afterwards, having arrived a little late, but nipped down through the field to get directly to the Ettersgill drop. We were a little surprised at the level - we hadn't allowed for the snow still lying at high level and now melting, so the gauge came up to something like 0.9m whilst we were on. Ettersgill was a little washed out (though it had some interesting cushion waves and eddylines), but the flatter sections are certainly easier and quicker with a bit more water, so we weren't complaining. Dogleg, however, was a bit more intimidating, so inspection was called for and we determined that it was big enough to present a choice of routes.

James, Michael and myself ran only the far right hand route, everyone else ran the main dogleg line as usual, and Nicky ran everything in sight. As you'll see from the video, everyone survived their chosen line, some in very fine style. 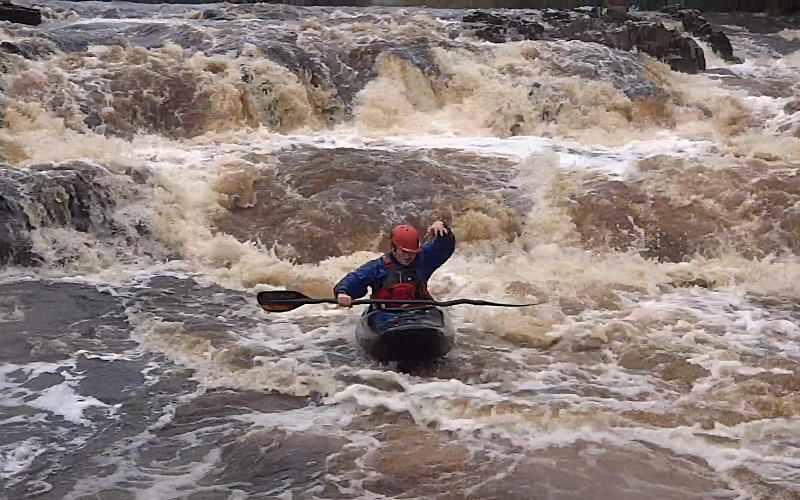 We now piled down towards Low Force, perhaps not taking it as seriously as we might. I got a bit close behind James, and had to change my line to avoid him, but not soon enough to get lined up for the alternative channel, so I hit the lip sideways and capsized. Something knocked the paddle out of one hand, and I think I had the angle wrong when I regripped it, as the paddle dived completely when I tried to roll. Since it was quite shallow, I bailed at this point, which was probably a bad plan. Dave was very close, but when I grabbed for his boat, the visual target turned out to be the Fluid logo on the aft deck, and I missed the actual grabbable point further back - drat ! Dave couldn't stay close, as I was now heading for Horseshoe fall, which we had already decided not to run - oops !

Somewhere in here the paddle got ripped from my hand, leaving a deep ragged gash in my right thumb. I then spent a rather unpleasant 75 seconds in the stopper, never getting orientated enough to spot the throwlines heading my way. Eventually this spat me out close to the right bank and a rope was gratefully received to ensure that I didn't get sucked back in. I'd already noted all my outfitting circulating round in the stopper, and the boat and paddle had now made their way down Low Force (leaving an airbag circulating at the foot for a while). Everything valuable was recovered downstream (thanks, guys !) except my shoes and one big airbag which had a slow leak anyway. The split paddle was fortunately wedged firmly under the airbag that stayed in the boat (which did a very good job of hiding the centre sections until I took the airbag out much later). I left the scene at this point, for Mary to stitch up my thumb down at the surgery (I recommend being married to a GP to save time in these circumstances), however, once the kit had been chased down, the boys had fun on Low Force and Little Force, with Doug still shooting video.

This report is abridged from an article which first appeared on Andy's blog, where there are more photos (of the non-SOC paddlers).