August - an early start to the whitewater season

August is usually still sea kayaking (and inland fishing) season, so we expect a bit of a rest after returning from the summer trip to the alps. 2011, however, has been one of those summers with no respite and besides the normal snatched Upper Tees trips (we've managed five since April, three in August!) some quite unlikely rivers have come into condition, including the Tees Greta and the North York Moors Esk, which the club hasn't paddled for ages.

First up, August 11th and heavy rain brought the Greta up to a barely paddleable level (a quick check by car gave a better impression than the EA gauge updated at 06:45). By the time we actually got to the put-in, it was pretty high (just shy of 0.9m at Rutherford weir). 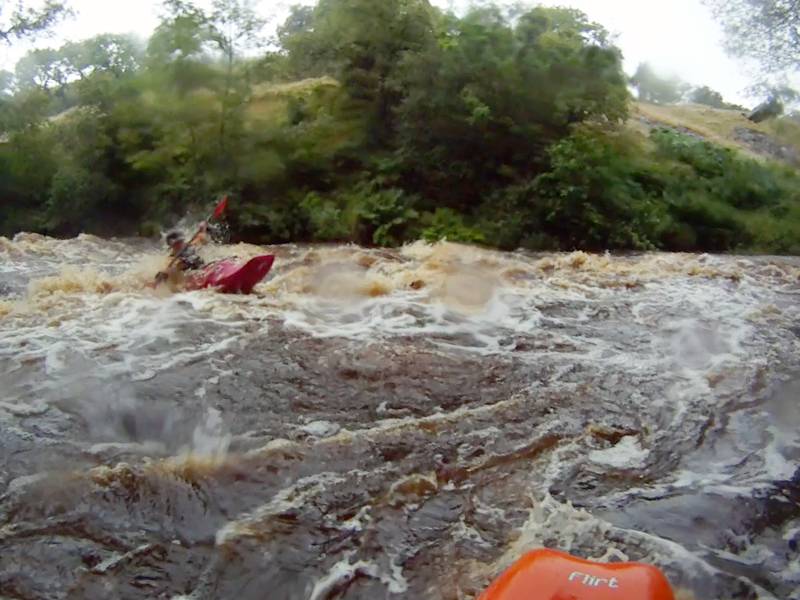 A group of six put on just above Rutherford bridge and found the river fast and brown. It's tempting to burn down quite fast in conditions like this, but we were all aware that the Greta is a place where newly fallen trees are always a hazard, and there is the narrow slot drop not too far from the start which has been known to cause carnage, so we were making plenty of eddies. 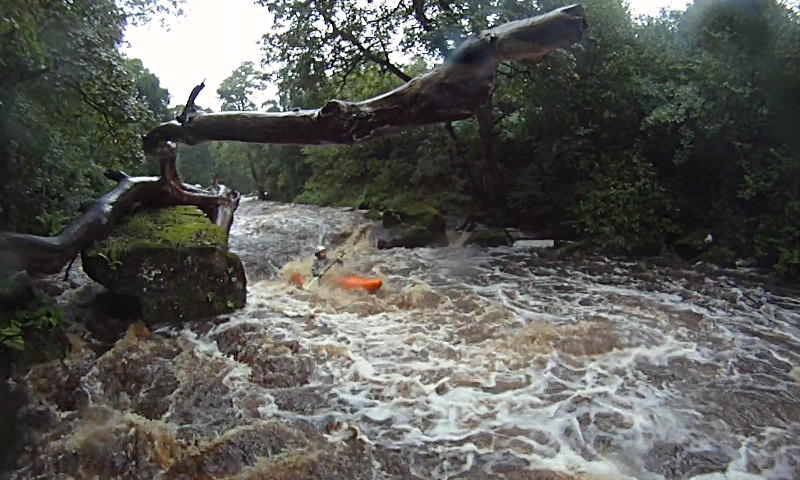 Blasting through the slot drop, not far below Rutherford

The huge dead tree looming over the slot drop was not actually in the way at all, and lines either straight on or hard into the eddy left both proved successful, so we were all down upright and in good order. Still cautious down the section below steep wooded banks to Brignall, then the river widens out a little with better forward visibility. A lot of this section is actually easier than when at a lower level, but there are a few major tree blockages - nothing new since last time (in January). Two of these involve small channels river left to avoid the tree, and the second one of these proved a bit difficult with boats getting hung up and low branches trying to make life even harder, but everyone involved was able to muscle their own way out of the difficulty. That left us with the final whoosh down through Hell Cauldron, round a blind bend, so we took the time to inspect this as new trees here would be really bad news ! The final stopper ate two playboats - one who went back to play and one who failed to make his intended line far right (those who went for the straight-on approach were fine). There's a big pool here for picking up swimmers, so we were soon back on the water and on down to Greta Bridge. We'd chosen not to shuttle to Whorlton, so got off here - though perhaps this would have been just a good level for the final grade 4 section into the Tees. It's always going to be there for next time !

Two days later, we were out again with the Tees at 0.97m on the Middleton gauge, making the Racing Section quick and technically quite easy. It really is a short trip at this level, so passed with virtually no photographs.

The levels continued dropping and we weren't sure that the Upper Tees would go on the next day, but, in fact, it proved to be a nice level, with just enough water at Low Force for the far left drop to be run. Francis also did the left-hand drop of the main fall, and one or two members of other groups (being a weekend and the only viable river, it was really quite busy) almost did this backwards, which is always unnerving to watch. 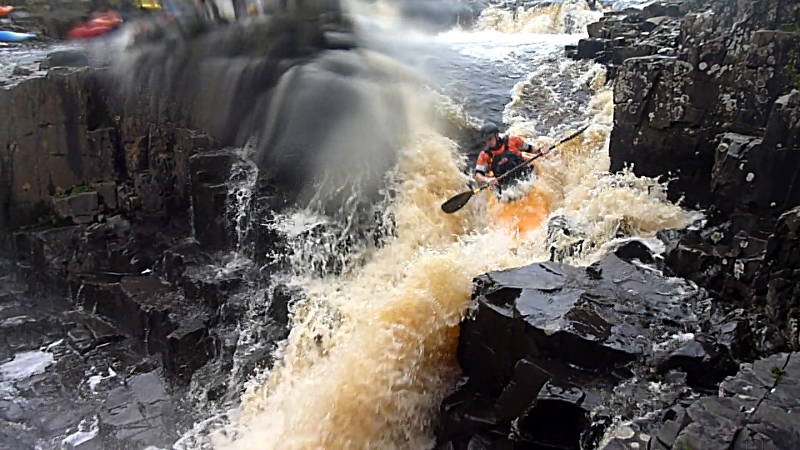 Another week, another batch of rain, and off we went to do the Upper Tees again, this time with the whole Waddington family, Iggy, Lizzie and Carwyn and their novice (!) Chris at what proved to be a very similar level. Whilst it's not an ideal trip for beginners, everything hard can easily be portaged, and swimming at the bottom of Low Force is not a big deal (as demonstrated by those who feel paddling is not enough and a few jumps are required for a refreshing day out). 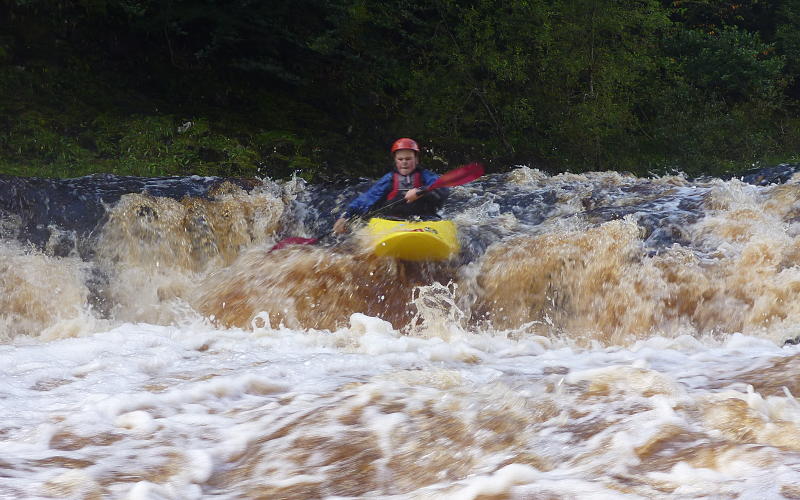 The next batch of rain, duly timed for the next (bank holiday) weekend, was a bit patchy and the Tees didn't come up. Nor did rivers we were keeping an eye on in the west, but near the east coast, over two inches had deluged in over 48 hours, so we headed off to do a river SOC hasn't visited for several years - the North York Moors Esk. We briefly considered putting on at Castleton, but as the level was dropping we headed on down to Houlsyke. This was very fortunate, as even this put-on involved us in what seemed an eternity of low-gradient paddling with numerous tree blockages, some requiring portages. There's a lower put-on at a footbridge at NZ747073, and the river comes very close to the road even further downstream, which might be an option. As near to the top of Crunkly Gill as possible would be best as this flat section seemed to take forever.

Crunkly Gill itself proved much more interesting, with lots of non-obvious routes round boulders, and still a few trees in the river to make things more complex. The old Yorkshire Rivers guidebook says "routes must be forged, rather than found" and this does rather sum it up.

There's another flat section in the middle after Lealholm, which wouldn't be so bad if we hadn't already paddled so much, but there are fewer trees and odd faster bits, and eventually more "proper rapids" appear. Again, at this level, route finding was a bit hit-or-miss with apparently good lines running out into shallows occasionally. A weir provided a short diversion with a nice playstopper, but tired arms can't afford to waste too much energy, so we hurried on. The final section down to Egton bridge proved quite exciting. A tree blockage provided one interesting pin, soon sorted, but in the meantime Francis' boat had got bored and decided to set off on its own. Francis set off in pursuit (swimming...), whilst Andy and Dave rapidly shifted boats to the downstream side of the blockage to follow. A big eddy with another tree caught the boat and Francis rapidly reoccupied it whilst the rest of the group paddled down. By the end, the level had dropped below optimal and a large shallow concrete shelf seemed likely to require people getting out to get back off it, but most shuffled off with a bit of plastic left behind. Another rapid looked likely to be Ann's nemesis, but she rolled up very promptly, finishing with a huge grin ! 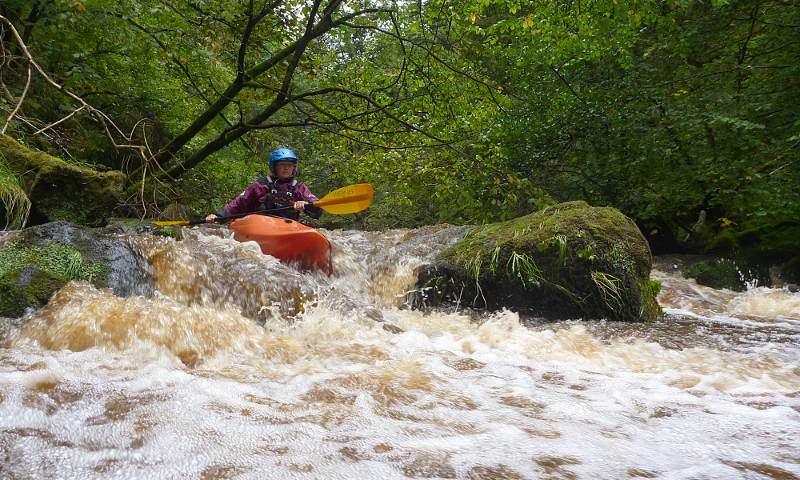 Forging a route through boulder gardens on the Esk

Perhaps a party of nine, none of whom had done the river before, on a falling level with a more upstream put-in than the best was not quite the ideal way to do this trip - it took us five and a half hours (the UKRGB guide suggests two - I blame Jim), but all agreed that the final set of rapids made it worthwhile.

Sunday required a day off for arms to recover for some of us - we hoped for more rain, and a few showers overnight provided a little water, but nothing was going to run apart from the Upper Tees again. This time Mary ran it entirely upright, showing great fortitude fighting a boat-eating stopper at the top of Dogleg, whilst Andy surprised himself by staying upright on his first run of the river in a playboat. Francis ran the left-hand fall at Low Force repeatedly, along with several of his mates, and seeing two of them run Dogleg together at break-neck pace (they are warming up for a serious river race) was exciting, albeit very brief. As the level was lowish, we got off at Wynch bridge, providing an excuse for more jumping into deep water. 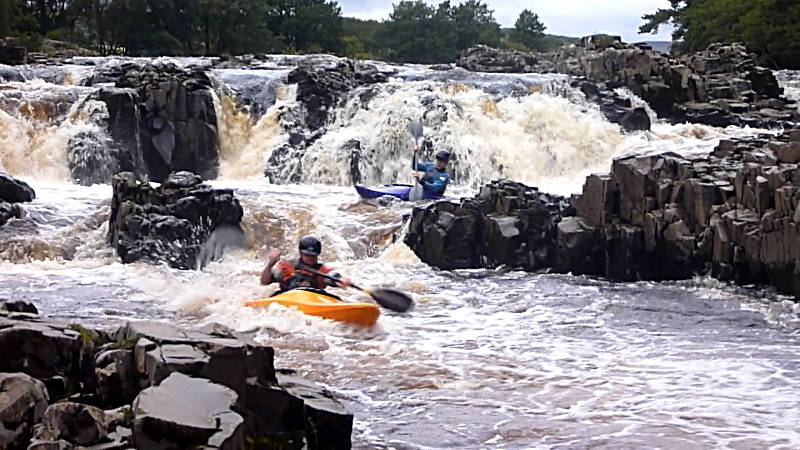 I personally only managed eight rivers from January to March owing to low water levels, but these trips bring the total to twenty rivers in the UK April to August so it must have been a great summer ! As I write this, it's September, with higher-than-average rainfall predicted this month, and hurricane Irene will arrive sometime soon, so we're looking forward to maintaining the momentum !!