A lot got done apart from paddling, despite the trip being almost entirely populated by Canoe Section members. This page is all about the paddling, whilst the canyonning trips (four this year) are written up elsewhere. I'll add a link if anyone cares to write up the Via Ferratas, but as I didn't do any, I won't presume to write about it!

The journey out went well for the first arrivals, although there was a minor glitch in that we had known the Tour de France was in the area on the Thursday as it had been warned about in UKRGB. We'd failed to spot that it was still on our route on the Friday, though we thought it would have finished before we got to the Col de Lautaret. Being earlier than we'd expected, we followed diversion signs to Bourg St. Maurice, hoping to get onto the proper road after the cyclists had gone, but realised that the diversion dropped back into the valley down a steep winding narrow road that we really thought it would be antisocial to take dragging our wheeled shed, if not, indeed, positively risky to life and limb. So we diverted via  Gap and found that we hadn't lost all that much time.

We opted for our usual warm up venues, whilst waiting for others to arrive, heading for the St. Clément slalom site on the first day, and then doing the Argentière slalom site and down to Roche de Rame with a cycle shuttle the next. With the arrival of more paddlers, we had a more serious bash of playboating on St. Clément, then ran on down the Sunshine Run to Embrun. Both Sarah and Michael went in for some surfing here, but Sarah swallowed enough water to make her ill for a day and a half later in the week, which was a bit unfortunate. 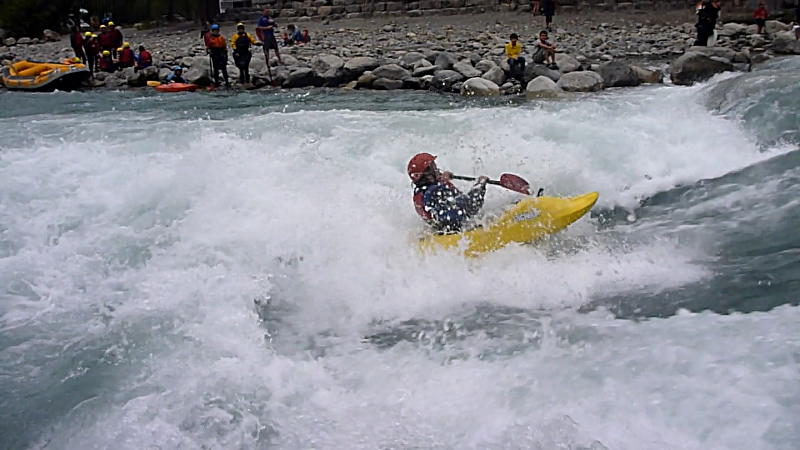 Michael on his most successful surf - a flat spin and off the wave intact!

We'd had a bit of rain, which compensated slightly for the lack of snow feeding the rivers, so found that the Upper Guisane, whilst lower than last year, was still possible, and had far less trouble with the entry rapid to the "S" bends, having figured out a better line this time. In fact the whole river seemed easier, so we figured that just maybe we'd got better ! 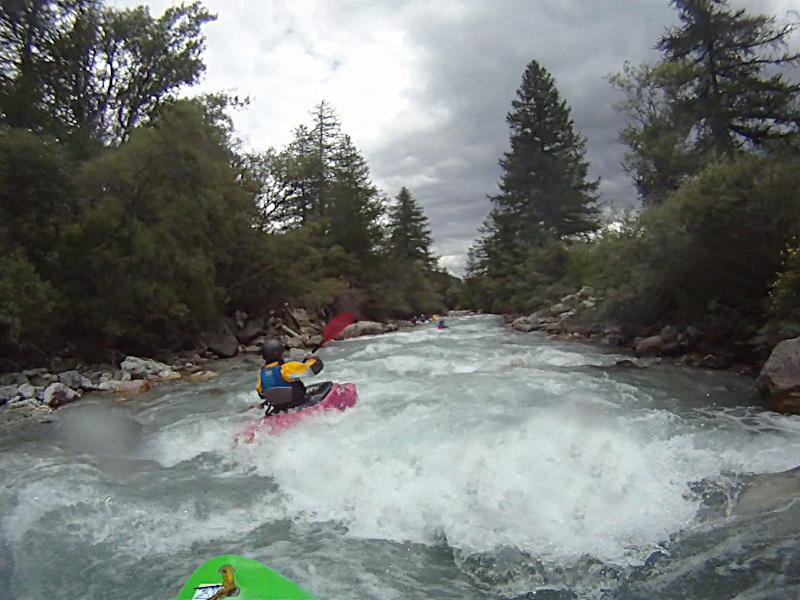 The next day one group went off to run the Middle Guil, which resulted in a lost paddle and a bit of lost confidence, whilst others stayed at Argentière for some coaching on the slalom course. It rained, and the river started to colour and come up a bit, whilst we tried to practice boofing (with limited success). Mary found herself doing battle with a stopper which really wanted to be her friend and was a bit clingy, but eventually she fought free and even made the eddy she'd set out for. 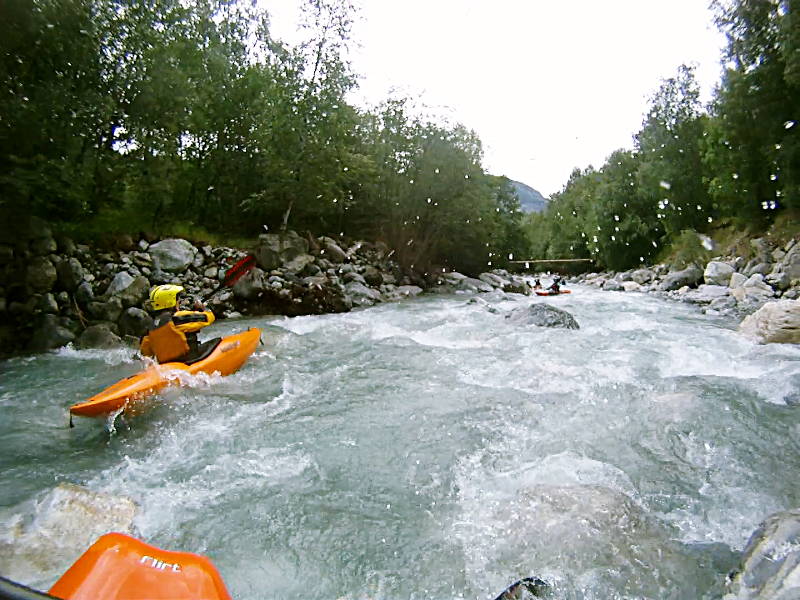 The rain meant that the Gyronde was up, although a slight scrape in places, and the weir was definitely a portage this time. The bit of the Durance that this drops you into seemed to have changed - what happened to the weir with spikes that gives a looping wave ? As this was a fairly quick trip, we had it in mind to do the Briançon gorge in the afternoon. The river above the little barrage had lots of water, but below, it had all been taken, and the little Glissière landed on rocks, so we retreated to St. Clément again for an an hour or two playing. 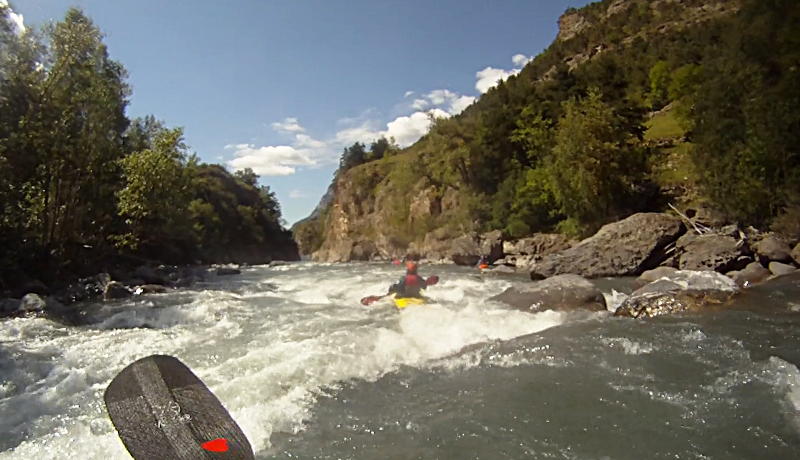 Reports indicated that the Ubaye had good water (a bit more snow in its catchment than in some other areas) so we headed off to do the Racecourse section in the sun. The trip nearly came to a premature end for one member of the group who had managed to leave his buoyancy aid at the put-in and not spot the error until after paddling the bit where he swam last year. Oops ! But we were near the start and 15 minutes brisk walk, mostly on the road, saw him back on the river more properly equipped. There was a lot of traffic on the river, mostly rafts, and this really slowed us down on one section (the first group fared better than the second, and got a way ahead). But hey, fun in the sun and we had all day, and we soon had the river to ourselves again. No more unfortunate incidents until the very end when, having run the last big rapid, Andy relaxed too soon and capsized on a little rock/wave just at the entrance to the gorge under the Roman bridge, almost exactly where he'd done the same thing in 2008. Again, the first roll found a rocky wall not helping much, but this time a second attempt did bring the desired result.

After seven days paddling in a row, the pace now lessened a little, with some canyonning and via ferrata, but one party headed for the Lower Guisane and were more successful than our 2008 run. Not trying to do the Upper Guisane and a long lunch first must have helped, despite the level being quite a lot lower. Another party did the Lower Guil down to the St. Clément slalom site, joined on the latter after lunch by Andy who had been reccying a canyon on a solo trip to see if it was suitable for beginners. He decided it wasn't. 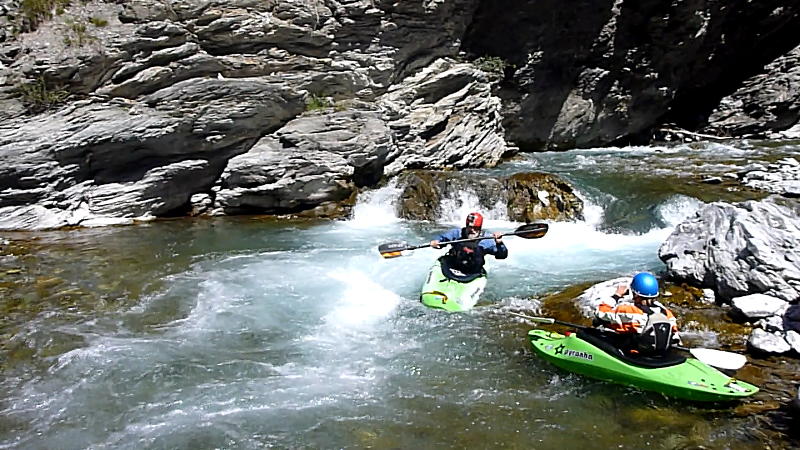 Andy on a little drop on the Upper Guil

We now had ambitions on the Chateau Queyras Gorge, an intimidating piece of grade 4 water in a deep gorge with many spectators hanging on the via ferratas above. We warmed up on the Upper Guil, with even lower water than last time, so we skipped the flattish section down from Aiguilles and put on just at the start of the more interesting little gorge. We also took off a bit early, to skip the weir above Chateau Queyras, which wasn't what we'd planned on when we parked the cars, so there was a bit of grumpiness about the carry. Andy just went and fetched the car... 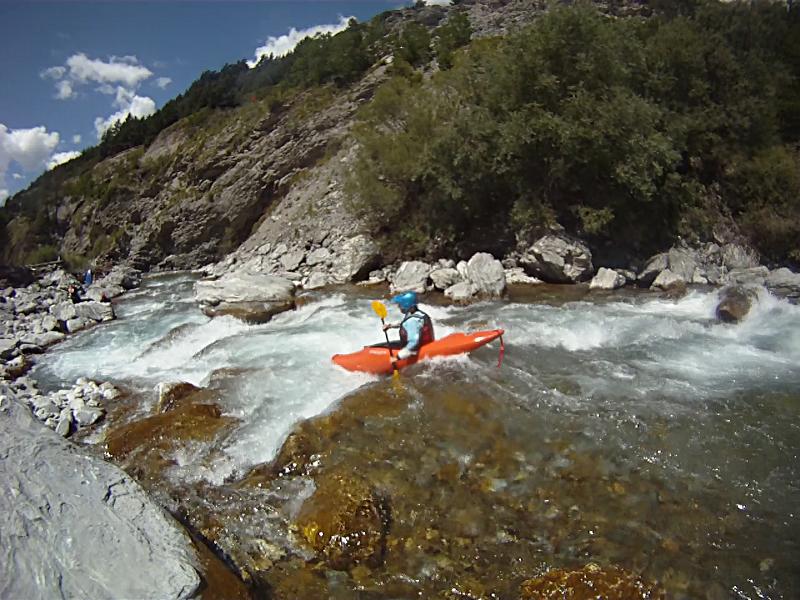 A reccy of Chateau Q now found some people changing their mind, and eventually a group of five set off. Andy had failed to persuade anyone to take his helmet with the video camera on, and the view from the road up above is not too good. The Florences got a better view from the via ferrata, but even here, you can't really stop at the best viewpoint as there is a continuous queue of people moving along, and few passing places. Sarah (16) and Michael (14) formed the SOC contingent in the paddling group, both in playboats (as were all except one of those paddling). Despite having seen one swim, one impressive hand roll and a nasty-looking pin in a previous group, none of our lot seemed to have any bother - at least not where those watching from above could see. Apparently a tree much nearer the takeout had a go at Michael, but a bit of branch-breaking and a roll saw him free of the clutches of that particular hazard.

Not the easiest place to take photos (on or off the water), Chateau Queyras looks fierce from above

Flushed with success we returned to camp, and spent the last paddling day doing the Sunshine run in a big jolly group.