Friday evening and the bar at The Eagles was warm and welcoming and those who arrived late could only wonder at the detailed planning which must have taken place earlier on. Clive, Alex McHugh and I arrived after 9pm but James and Marie had driven up in the day and both Susie and Rich live an hour or so away. Alex and Rich discovered they were at uni together which meant they could drink faster than the rest of us and would doubtless paddle better!

We had driven through heavy rain but it stopped before 10pm on Friday and on Saturday morning it was clear from the river gauges that it had mostly gone. We wanted to paddle the Ogwen but there's no gauge on the river and the Seiont was still showing medium, so we drove west to Bethesda. The river level was a bit lower than we had hoped for but the water was perfectly clear and deep enough to paddle, with real technical falls, tricky slots and lovely rapids. Mostly we could read and run but at a few tight spots it needed to be inspected to find a route and give a signal from the bank. It was pretty much non-stop action for over two hours to the get-out on the edge of Bangor and it kept us warm despite the cold conditions. We made it to the Summit café for hot drinks and huge slices of cake which were well earned. 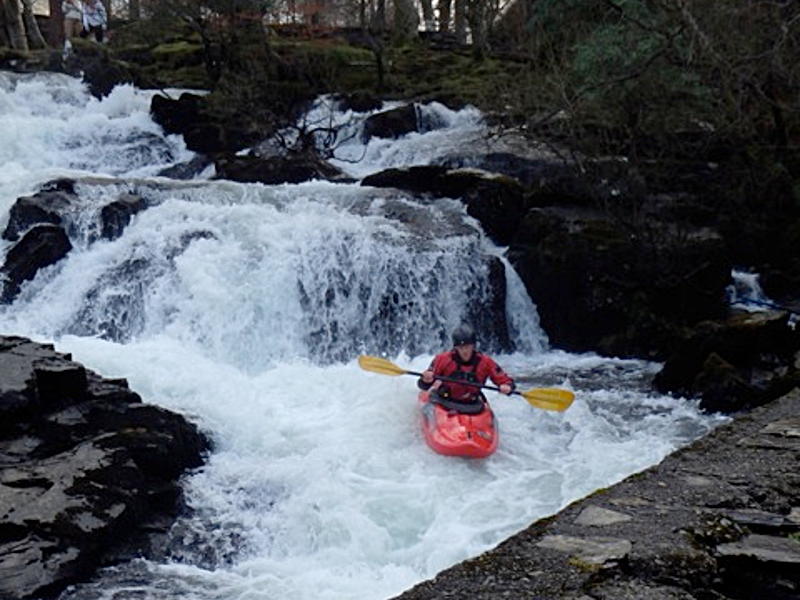 We were staying at The Eagles, Penmachno. It's a very convenient spot for river paddling just off the A5 at Conwy Falls and a couple of miles up the road. The new owners were putting in a new commercial cooker when we were there and hope to have pub meals up and running very soon. We ate out and getting back not too late we could see that the crowd in the bar were well ahead of us again, a couple of beers and we didn't take any rocking that night.

Next day we knew there was no choice, the Tryweryn had been running Saturday but not Sunday, so after a magnificent cooked breakfast in the busy bunkhouse kitchen, it was off to the River Dee. Many other paddlers had the same idea and there were queues on Serpents Tail with paddlers waiting to get a clear run. There was plenty of water, really a very good level with some great playwaves. Some of these were a bit more punchy than they looked and we were mighty impressed by Alex's triple barrel roll in one such. Stunned as he swam out into the nearby eddy, we realised this was no was no party trick but a very angry wave which had just given Alex a damn good spanking.  Pretty soon we were at the Town Falls and it's a lot bigger from the river than when you look down at it from the road bridge. The carpark is just after the broken weir and it's almost big enough for all the paddlers today, but it makes getting off the river very easy. We had hot soup and roll at a nice coffee shop in town and then headed our separate ways home.

What a super trip, must do it again, it's not that far and with a bit more water we could do...