A dry spring has left us without a lot of paddling through February and March and the news is full of "Drought-struck Britain" stories. April, however, saw a certain change of fortune, at least here in the north. Four SOC and a few non-SOC friends started the spring with a week's whitewater in Scotland, based from a rented house for ten near Fort William.

With a trip on the Upper Tees for some of the group on their way up, grade 4 paddling was set to be the order of the week. Scotland itself started unpromising with the Orchy too low to paddle on Easter Saturday, but four of the group stepped up a grade to paddle the Etive, though it's not too fierce at low level. 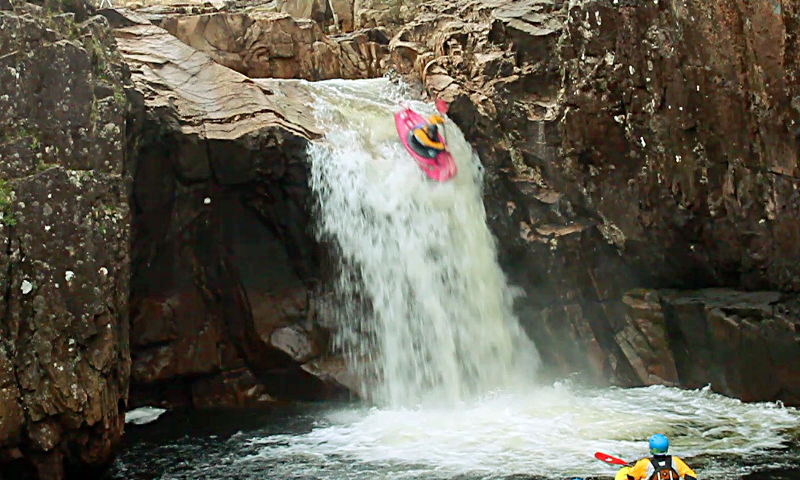 Sarah on Right Angle Falls - bigger when the bottom pool is low !

Sunday and the water was still a little low, but the Spean gorge is a fantastic venue at low levels. One person ran the dreaded slot-with-a-siphon, but most regarded this as a compulsory portage. The narrows near the end was also a portage as it really was too narrow, but the rest went well, and by the end, a promising drizzle was looking set in. Next day the stream by the house was well up, but looked a bit of a hike, so we went for the next nearest river, the Loy. This was good sport, and not too serious, but was dropping off a bit by the time we reached the eerie tunnel under the Caledonian Canal at the end. A few then went on to the Arkaig.

Tuesday saw levels still reasonably well up, with lots of snow on the tops, melting lower down, so the Pattack was a bit higher than last time the Waddingtons had run it in October. No disappearing boats doing rapids on their own this time, and a really fine river. One set of paddles did decide to do the last rapid without their owner, but these were found and returned to their owner via the good offices of Glenmore Lodge.

On Wednesday, the Roy had dropped somewhat, and we felt we could tackle the Roy Gorge. Down to nine paddlers, we stuck as a single group, which did make for a rather slow trip. Almost everyone started straight in at grade 4 by running Rooster Tail, then barely enough water for the various little ledge drops before the gorge narrowed down for the portage at the remains of Headbanger. Most chose to do the left-hand drop at Brothers Grimm, and the interesting narrow section below (some more than once and one with a roll up in the middle to put previous swims and portages firmly in the past). We had a few more odd swims and then the drop with the siphon. Here we wasted far too much time, people got cold, others got psyched out when live-bait protection was being set up. Four of the six who ran the drop had to roll, or brace frantically, or wrestle out of a near-pinning. Mary then got a perfect line, and Andy swam... Sarah was now very cold, but Bill soon got us moving apace down the easier ground into the Lower Roy, but staying close and piling down proved less than ideal when the leader got stuck on a rock, the second piled into him. The next paddler had no gap to aim for, and soon all three were upside down. Andy rolled up to find Michael swimming - now that's a novelty ! After that we kept a bit further apart and had no further mishaps, but were a bit late off the river. Thursday turned into a day off for everyone when some didn't wish to paddle,and others headed for another crack at the Pattack but found it too low. Those on their way home today managed to field one paddler onto the Etive (where he joined another group in considerably higher water than earlier in the week).

Friday was the last day on the water, and seven paddlers found the level on the Orchy more to their taste than earlier, and the sun shining too ! One or two of the shallower rapids proved to contain tripping hazards, but all the named rapids provided good sport with the odd paddler choosing to portage one or another of the drops. Chicken Chute, Sore Tooth, End of Civilisation and the Witch's Step all went and made for some good video.

An excellent week, and the SOC paddlers (Andy, Mary, Sarah and Michael) thank the others (Nicky, James, Ellie, Phil, Ben, Bill and Niki) for making up the numbers to fill the house.

The mailing list proved its worth again here, with some members busy organising an evening trip to the Washburn. But as the weather was foul, John Wootton put out a suggestion that perhaps a real river was on the cards. Andy agreed, and the pair met up at 6:30 at Yockenthwaite (since both had independently arrived early and decided to have a quick drive up Langstrothdale for a reccy). We decided it would be best to take out here, and shuttled boats up to the top. We'd already unloaded the boats before we spotted that Greenfield Beck was quite low, but Oughershaw Beck was well up and perhaps if we'd looked first it would have been worth taking a look for a higher put-in. Ah well, next time perhaps. 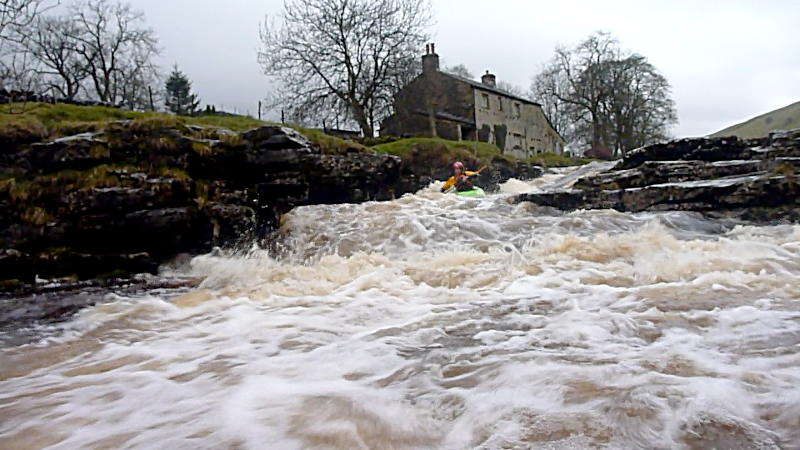 Putting on at the confluence, there was enough water to avoid a scrape and all the drops were good fun - so much so that some begged to be run twice. Or three times. Nonetheless, it only took us an hour to be back at the cars, and in for a swift pint at the George. Just as well, perhaps, as the hill fog was right down, even between Reeth and Langthwaite, and it took Andy an hour longer to drive home than the outward journey.

As the rain continued, Andy was woken the next day by the news that Dave was looking to paddle some spate becks in Teesdale, including the elusive Eggleston Burn. An opportunity not to be missed ! We started with Bowlees Beck, where the waterfall at Gibson's cave was crashing down spectacularly over its full width. Dave and Andy elected to put on below the next drops, setting up safety for Jamie Conn, who made it look... quite difficult. Good decision. The rest was fast and furious down to the carpark, and on to the next venue.

The drop under the bridge at Middleton looked a bit meaty, and with an awkward portage in prospect a bit further up, we chose to paddle a one kilometre section in the middle of Hudeshope Beck, with a couple of drops and a fast schuss under a bridge round a blind bend which we'd failed to eyeball, as we had parked the car above it. The first drop caught Andy out, as he landed perfectly then caught something unexpected on the outflow, and found it too fast and shallow to roll. One down.

The next drop is the big one, and Jamie favoured a line left, which looked a bit bruising, so Andy chose to boof on the right, whilst Dave reserved judgement and watched. Andy's line worked for him, so Dave followed, and found that a swift roll at the bottom of the fall ensured his survival too. More fast water, then a last eddy on the wrong side, below the car. Drat. Send a probe. The probe (Jamie) lived to report back, so Dave (it was his turn) went next and looked OK as far as I could see round the bend. Andy came last with the helmet camera and got a bit low in the take-out eddy, but graunched over the rocks to make it to the car. 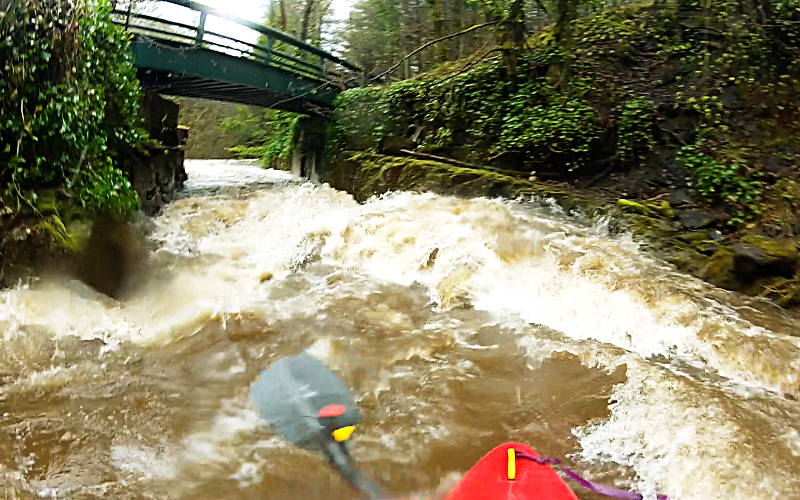 The wave on the blind bend - easier than it looked!

Finally we headed up to Eggleston Burn. This was a bit higher than when Dave had run it two weeks earlier, so we were a bit nervous. The flattish first klick went well, but eddies were noticeable by their scarcity and the difficulty in staying in them. As the gorge narrowed down, Dave blinked first and decided to get off. Andy swiftly decided he'd better follow suit. Jamie, veteran of some epic descents, just carried on solo. His video appeared on vimeo, and, suffice it to say, looking at that, the SOC contingent considered their unanimous decision to walk out to have been a good call. Oh well, next time !