On our first Iceland trip, local paddler Þorstein Sigurlaugsson suggested that an expedition round the NW Fjords would make a fine trip. Starting from Stikkishólmur, as he had in mind, would be a longer trip than I think anyone in SOC would be able to undertake, but the idea has taken hold as an outline plan to circumnavigate the remote and largely roadless Hornstrandir peninsula at the furthest NW tip of Iceland. This has a relatively short shuttle, and two weeks paddling should easily be adequate to complete the trip, even allowing for a certain amount of bad weather. Here is an outline sketch of the route (on OpenTopo map - choose "ESRI" for aerial photos, and add "Open Sea Map" to show chart features, of which their are just a very few lighthouses), which comes to 220 miles. 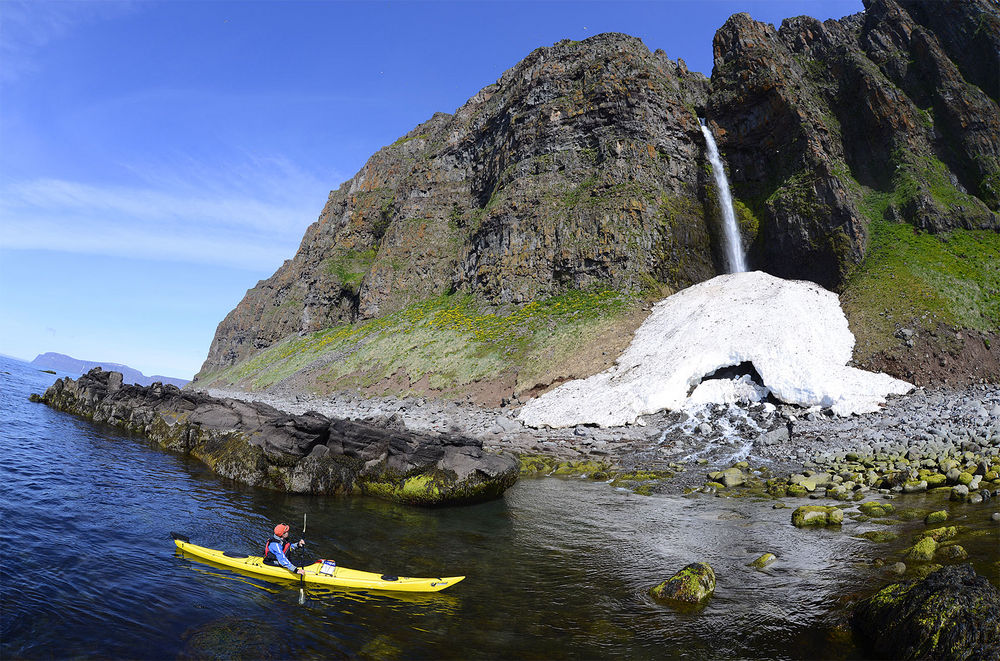 Logistics: obviously depend on the number of people interested. My initial plan would be to take a vehicle and trailer of boats to Iceland by ferry. For more paddlers than would fit in one car, a bus will get to the area where the shuttle would be set up, and bodies would be shuttled with only one car being needed. An alternative might be to get the trailer transported by ferry and hire a vehicle in Iceland - I'm not convinced this would actually be cheaper.

The plan would be to put in near the head of Ísafjörður, and paddle NW towards the open ocean. Two or three days paddling would reach the jumping off point for the critical passage round the far NW, which is exposed to the prevailing weather and swell. A fit party in good weather could pass this in a long day, but I'd plan on taking two, and allow some contingency time to wait for a good weather window. Once round onto the north coast, conditions are generally better in the summer, but there are another couple of exposed headlands to pass. After the Hornbjarg, the coast faces NE and three days paddling would reach the road system again, whilst another two days would reach a landing for the shortest possible shuttle at the head of Steingrimsfjörður. That adds up to ten days paddling and four days contingency for weather. Strategically placing a bike further north on the east coast would give us insurance for losing another day or two. For anyone flying out to Reykjavik, the trip should easily fit in a three week window allowing a bit of time for sightseeing, though anyone travelling out with the trailer might take a bit longer. 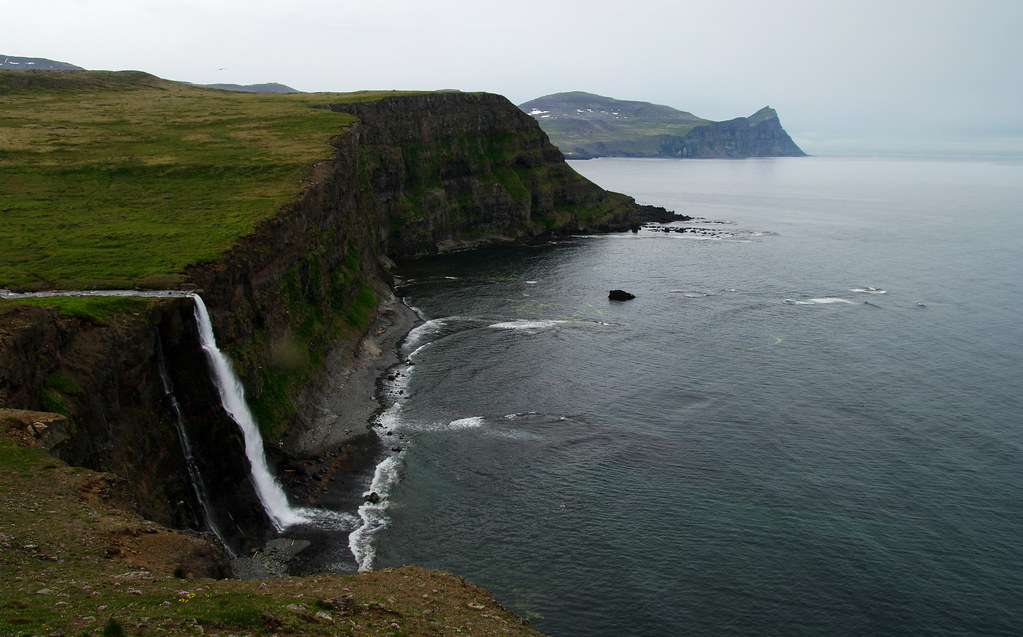 The Hornstrandir peninsula was depopulated in the late 1940's as the way of life (not dissimilar from St. Kilda) was much harsher than in the main part of Iceland where farming is at least possible. It was declared a reserve (of 580 km²) in 1975. It is a prime wilderness hiking area, as well as having a transient summer population using some of the old villages and harvesting eider down, eggs, birds and fish. Because inland walking routes are blocked by snow early in the year, there is not much tourism until summer. Consequently, transport links such as ferry service to some of the outlying settlements don't really start until the very end of June. A sea kayak trip would not rely on land routes, but would want the insurance of possible escape by ferry, so a three-week block in July would give us the best in long daylight and good weather.

If a good weather window failed to materialise to get round the far NW, there are a lot of fjords and inlets to explore around Ísafjarðardjup to ensure that we would not go short of paddling, even if the major objective looked infeasible. Whales, seals and bird colonies abound, whilst arctic foxes roam with very little fear of man away from the fishing ports.

Here's a scan of the Tourist Map, although this doesn't quite cover the full area - both start and end points are SE of the map area. This is not as far north as our Lofoten trip, being just below the arctic circle, so no midnight sun, but it will never really get dark in July.

The original photos I had on this page have vanished, so I've randomly popped in two more from the web. If these vanish (it's in the nature of these things using off-site photos) let me know and I'll find some more ;-)