We'd learnt a bit about canyonning on our Tramouillon descent in 2010, and were trying to avoid big novice groups in canyons with lots of pitches. We'd also concluded that carrying ropes in small tackle bags with some buoyancy in them was a good move. The result was a choice of the easier Fournel canyon for our big group with little abseiling experience. This can be done without rope at all, and club canoeists have done it in previous years with the aid of the odd throwline and nothing more. It's easy to get to from the Argentière campsite just by driving up the valley side following signs to the Silver Mines. The parking for the mines is the takeout, and we continued towards the guidebook location for the put-in. On the left before we got there is a big layby with lots of signs giving advice on canyonning, and this is the current normal way in, so we stopped here, changed, and shuttled. The canyon is below a small hydro dam, and has the potential to be flooded in just a few minutes by the generators being switched off and the water diverted. To avoid a repeat of previous epics, the canyon is equipped with via ferrata steps and wires at several points, to aid rapid escape, and there are a number of solar-powered sirens to give warning if the stream is about to increase. This is all quite reassuring, and the canyon seems to be favoured by French guides with big groups of kids, but as we were fairly late starting, on this first trip we had the canyon to ourselves. 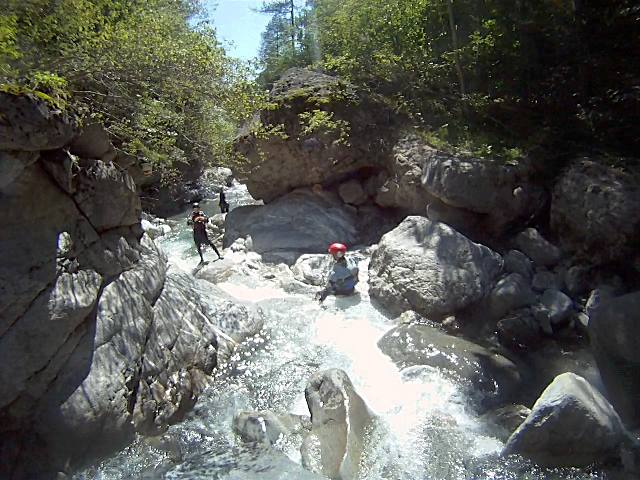 First toboggan as the canyon cuts down into the rock. Photo: Andy Waddington

Walking in a bouldery streambed in the woods soon leads into the gorge with bedrock and various small slides and little jumps. The first worthwhile jump offers a choice of shorter and longer drops (down with the water, or off a ledge higher on the right) of two or three metres into deep water and is soon followed by another one where a rope hanging off the left side makes it easy to get across a sloping ledge from where a slide is probably easier than a jump into the stream. The ledge gets quite slippery after a few people have been across, so the rope, which at first seems a bit superfluous, does help those coming later. 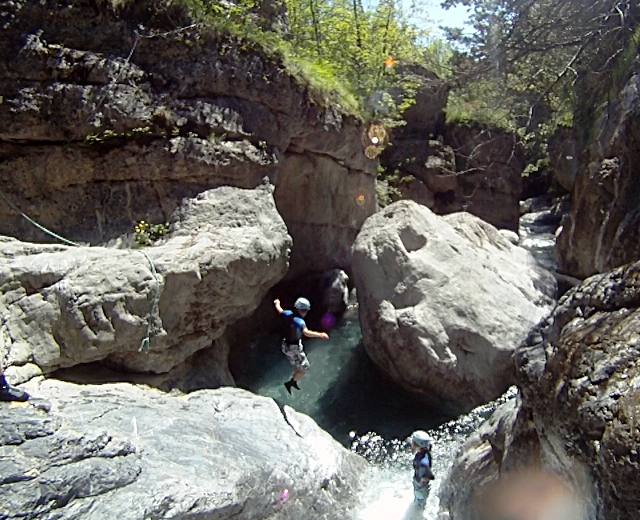 Not too far beyond is a bigger waterfall, which you can scramble down to in the streambed, for the shortest jump, or approach via some descending via ferrata to a bolt on the far wall, which would give an abseil close to the water, or a good take off for a higher jump (this is the route a lot of the French were using on our second trip). Up some via ferrata steps is a big ledge with two more possible abseil points, and on our first descent, we rigged the more distant one of these, which gives a good (though short) dry pitch. On our second trip, some scrambled to the waterfall and jumped down past the French kids to avoid being mired in the queue. 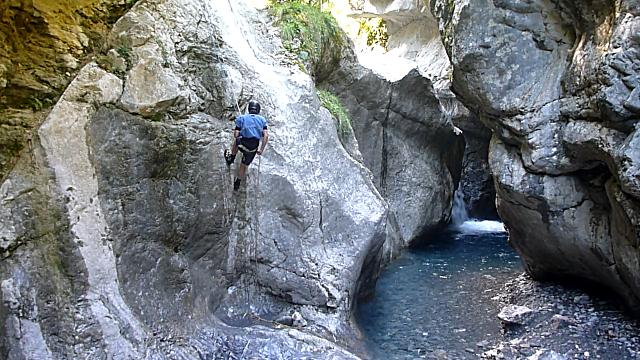 Just beyond is a choice of steep toboggan down the water, or a climb up via ferrata steps on the left. These can be used to bypass the next deep pool entirely via a muddy scramble down, or can be used to get to the takeoff for a fine jump which avoids getting your bottom ripped up on the toboggan. On both trips, we shared ourselves out between all three routes, though the jump was most popular with the French, so most of us avoided queueing for this. 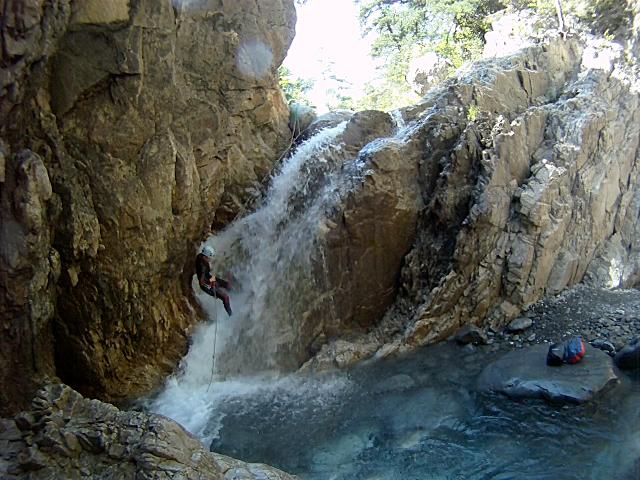 Roped scramble down right in the water - you can't rush it as the rock is quite sharp!. Photo: Andy Waddington

These two drops take up a bit of time, and this part of the canyon is the deepest and most shady, so it's good to blatt on through the next narrow section and back out into the sun as the canyon opens out. Another deep pool with a small jump gave us the excuse to play at back somersaults and the like, then there is a bit of streambed leading to another drop. A knotted rope lets you scramble down steeply right in the water, but it's not very committing as to the left is a straightforward dry climb which we tried to ignore. One more short scramble (not recommended as a jump unless you know exactly where the water is deep) leads to a deep bit you have to swim, briefly, then steel steps appear on the left (leading to the silver mines) and a steep path back to the cars.

After the first Fournel trip, we were looking for something a little harder, but still suitable for people who hadn't done much abseiling. The guidebook reckons Canyon de l'Ascension fits the bill, so Andy set off to reccy this. The book says half an hour to walk in, but if one person is carrying all the kit, 45 minutes is still quite a hot slog. A faint path down into the woods brings one to the cool stream and it's only a minute or two to the first pitch. This has an easy bridging take-off, down a dry slot, then a ledge leads back to the water where only a short further abseil reaches the bottom.

There's then quite a lot of little scrambles, mostly with a choice to stay out of the water, before the canyon starts to cut down. A traverse line on the right is a clue, and leads to two good bolts from where the rope hangs out of the water, with the bottom of the pitch in deep shadow, making it look deeper than it is. This take-off is also not too bad, and most beginners would be OK. It's a very fine pitch, not vertical all the way, so the water splashes about quite a lot at the bottom, but there is somewhere to stand to unclip. 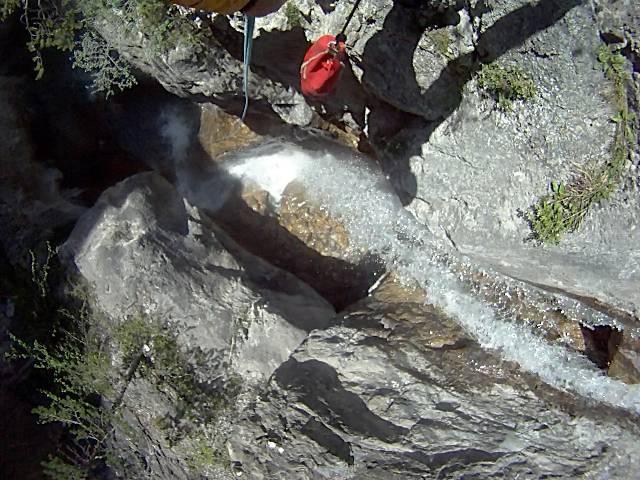 Vertically down the second pitch in l'Ascension. Photo: Andy Waddington

Another traverse line on the right leads to a similar takeoff for a shorter pitch, but from the bolts, one can see across to a fixed rope on the left, so I scuttled across to this. It's easy to clip on for an abseil, which is what I did, but a short way down it becomes clear that this is mostly used as a handline as the rope becomes a knotted one. There's enough of a ledge to unclip a descender, fortunately, then an easy enough scramble on down, and a little path on a ledge which makes an easy route down the next bit. 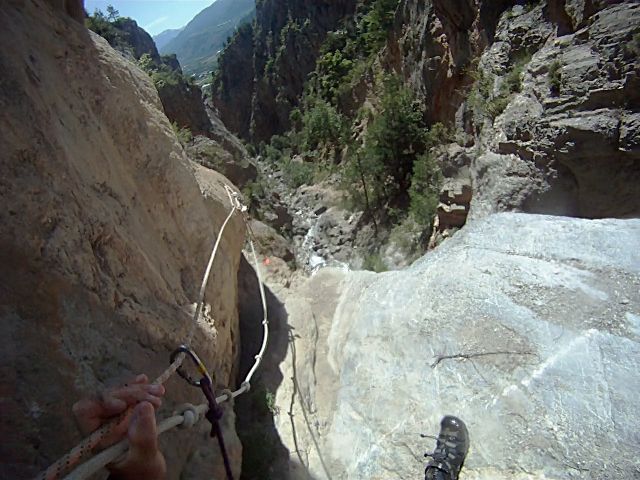 Heading out to the bolts for the biggest and finest pitch in l'Ascension. Photo: Andy Waddington

Now there's a scramble up to reach the next traverse line, which leads to two bolts in an exposed position with not an enormous amount of room. This is the bit that would be a bit of a hassle if you had beginners who weren't confident in clipping everything in themselves. It's the biggest pitch, with the rest of the canyon laid out below, stretching away into the Durance valley. It's also a very fine abseil, just clear of the water, but landing in a deepish pool. However, it's easy enough to get to the far side before unclipping from the rope and pulling it down.

The canyon now opened out, and although there were bolts for more pitches, these both proved to be optional. The first one looked nice, so I abseiled, but the second looked to have some sharp edges, so I chose to scramble down on the right. Most of the way down is steep path on sharp scree with occasional forays into the stream, and eventually a stream crossing leads back to the path I'd used on the way up, and so to the car. The walk-in might have been slow, but the descent was inside guidebook time.

Andy decided that this probably wasn't good for beginners, which is why we found ourselves back in the Fournel for the second trip. Doug and Gail did the Ascension later in the week, and found themselves slowed down by a French party, all of whom were indeed beginners except one, who needed a bit of assistance to rig a tyrolean on one pitch to keep his charges bone dry.