Canyonning was one of the aims of the Canoe-section-organised trip to the French Alps in summer 2010, although we were unable to tempt any regular caving section members to join us, or we might have managed a few more. Paddling actually took up most of our days, but we did get a flavour for the character of the canyonning trips with one sunny canyon towards the end of the holiday. Westies have done one easy canyon in the area several times previously with no more than canoeing gear and throwlines. We'll be back for more !

A reccy after the Upper Guisane paddling trip gave us an idea of what a "PD" canyon looked like, but we decided that it was a bit far to drive to Canyon Pont de l'Alp for only a couple of hours of trip. Instead we picked the Canyon de Tramouillon, much nearer our campsite, and billed as an ideal place to introduce people to abseiling. We ended up with three families in three cars, and set up a shuttle with two cars left at the bottom (a bit lower down than the correct place, as it turned out).

The canyon is escapable early on before it drops down a series of pitches between cliffs, and this proved to be a useful feature as assurances that one family had done "lots of abseiling at the climbing wall" turned out to be based on a bit of a misunderstanding of what was involved. After two pitches, Westies decided that things would go a lot quicker if they took the escape option, leaving us down to seven.

We were very pleased to have brought more rope than strictly needed, as this enabled us to have the next pitch rigged whilst the group was still getting down the previous one. In fact, at one time, we had three pitches on the go at once, with ropes of 50, 40 and 30m all in use. This was useful, as another (smaller, and therefore faster-moving) group caught us up towards the end and the only reason that we were not holding them up badly was because they had only a single rope.

We found a sling round a tree to rig what the guide book showed as a 15m first pitch. This consumed all our 50m rope, only to reach a more vertical bit of waterfall with another sling, which we rigged with a shorter rope. It was possible to scramble up or down the side of both of these, but difficult to see where you would rig something to make it  just 15m. 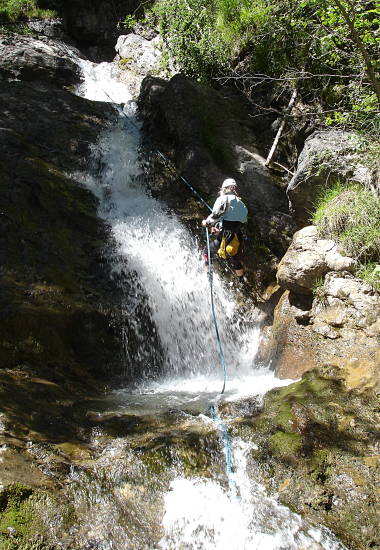 Beyond the first drop, a scrambly streambed led for some way among trees to where the canyon started to cut down and take it more seriously. A bolt-and-chain rigging point was found at the top of a broken sloping cascade, but almost everyone got on at the ledge a little way down, as that was where the path seemed to lead. The guidebook shows this as a 9m pitch, but from the rigging point to the bottom, on a slope, was quite a lot more than this and we again used our 50m rope without feeling that it was overkill. The photo shows Mary finding enough footholds to keep herself out of the main flow of the water.

This landed us in a splashy pool with a series of pitches continuing below in fairly quick succession. The guidebook lengths of these were in the 8 to 14m range, but in every case, these seemed to be the vertical height rather than the length of rope needed - all the drops in this particular canyon being quite sloping. 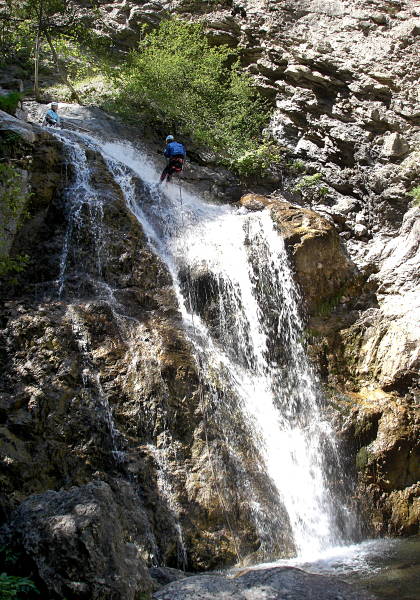 The second of these pitches was the most vertical and probably the most intimidating for anyone relatively new to abseiling. As it was also very slippery, we used a separate lifeline on this pitch for anyone feeling a bit nervous. 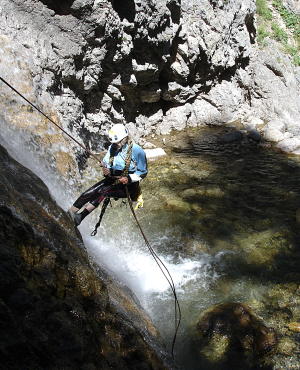 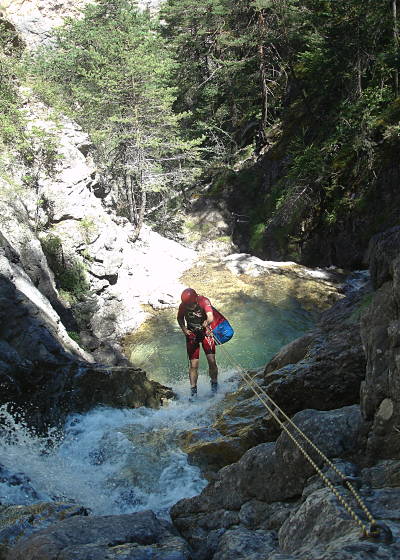 The next pitch, in the guidebook as 14m, proved to need more rope than we had put on it. A broken drop had a deep pool halfway down, over which the stream was spouted by a little ledge just above the waterline (the French refer to these formations as "geysers"). Although the pitch could be descended dry, the pool and geyser was harder to avoid. Various ways of getting across were tried, but giving yourself not quite enough slack and ducking under the geyser proved to be a good way of dislodging a contact lens. Although in the guide as part of the same pitch, two bolts on the right of the ledge meant we could rig the next bit on a separate rope. Since the amount of dry space on the ledge was limited, this was one place where having more than one rope, and thus being able to rig the two sections simultaneously, made life a lot easier.

A deep pool at the bottom could be traversed on the left to reach another bolt takeoff for a straightforward 10m drop where the main water flow was off to the right, and just a splashy trickle accompanied the canyonneer down the drop. This debouched onto a short section of streambed where scrambling over rocks led to another pitch, marked as 14m in the guide and again was rigged out of the water on the left. Some quite awkward scrambling over polished rocks now led on down for some distance, and the view back with the sun behind was very atmospheric with spray glinting in the sunbeams. 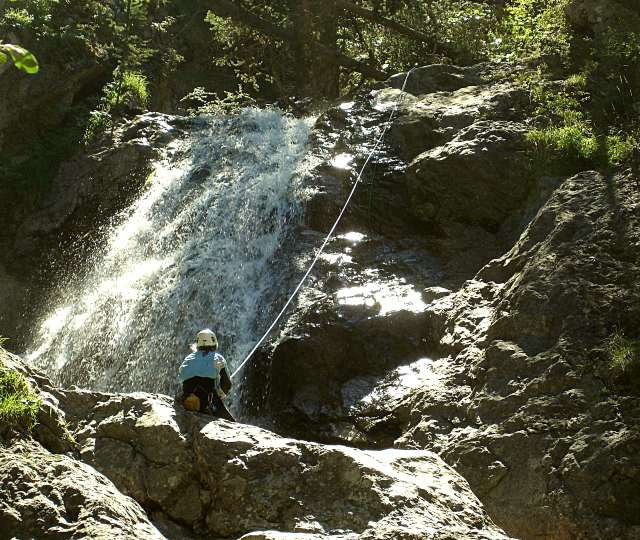 Below the scrambling was another pitch which looked quite spectacular from above, though proving to be less than vertical once you got on to it. With the 50m and 30m ropes still in use above, we rigged this with a 40m rope which should have been enough (the guide shows this as 18m, the longest pitch, though at the time we had rather lost track). Doug found that the get-off at the bottom was a little awkward (getting off a too-short rope into swimming depth water) and after two more had descended and everyone was down the pitches above, we decided to swap over to use the 50m rope, which did make it a lot easier. 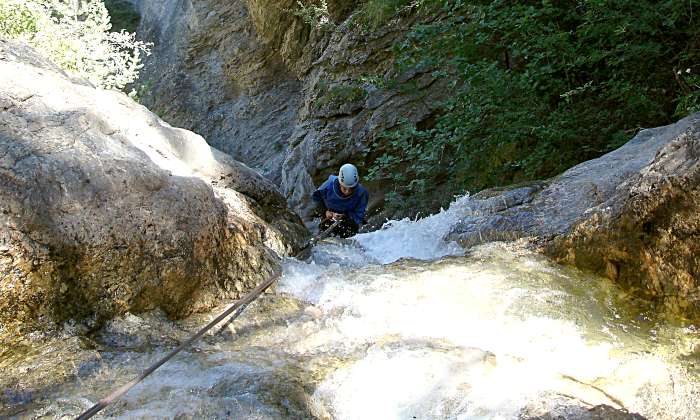 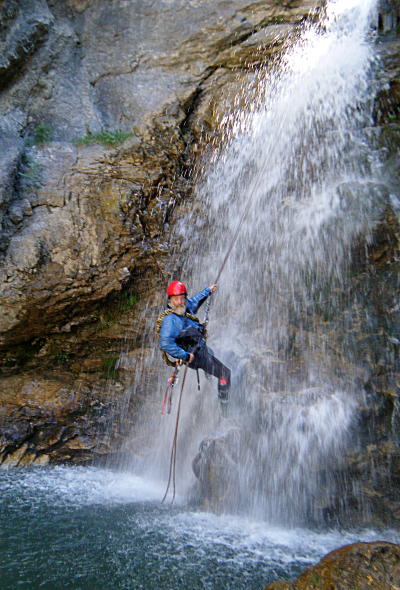 The canyon was now showing signs of opening out not far below, and a big orange cliff which we knew was quite near the cars, seemed to be getting a lot closer, so we were fairly confident that we didn't have far to go. The next pitch is 14m in the guidebook, but we could see a short drop, with a fixed piece of orange rope below, and our shortest rope proved easily enough to reach this. The orange rope led to bolts on the right for a final 11m drop, which was spectacularly wet (although those with good soles could avoid most of it). Since this was clearly the end of the ropework, and the sun was still shining (yes, we had taken quite a lot more than the 2-3 hour guidebook time), some of us were a bit more blasé about this, getting very wet indeed for the camera.

A bit more scrambling over rocks and under trees led to a path out left, which reached the road just above a large layby which we had noted (but ignored) on the shuttle. However, the walk down the road to the cars didn't take long and the scenery overlooking the Durance valley was magnificent among the alpine meadows, so we didn't mind, and the bonus was that the car was now in the shade !