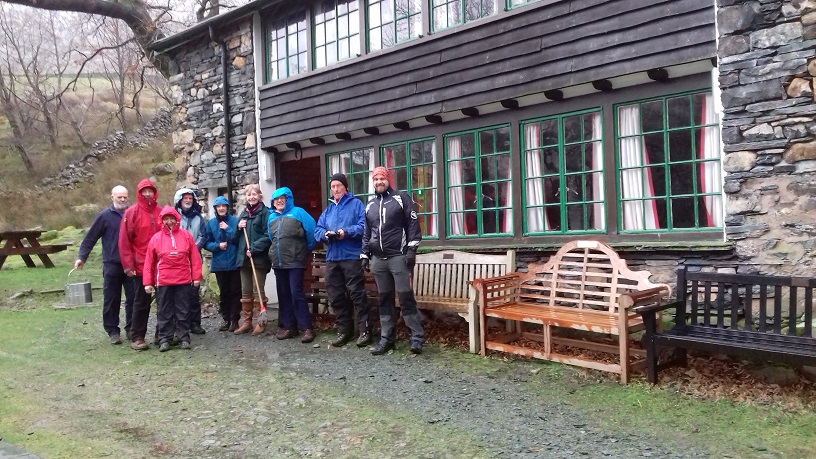 SOC have been going to Seathwaite Hut in Borrowdale since 1974. However, the last two years has seen poor attendance and it was decided that 2017 would be the last year we booked the Hut which is a shame as it is in a great location and has a wonderful atmosphere.

Twelve of us stopped in the Hut on February 24th to 26th: Ian, Graham M, Graham B, Peter K, Yvonne, Carol A, Anne L, Judith & John, and Barbara, James & Leigh, and we were joined by Graham & Glenys who stopped in a nearby Inn.

Some of us cycled or walked on Friday in what turned out to be marvellous conditions compared to the rest of the weekend. Saturday and Sunday saw atrocious weather - the Lake District was clearly displeased that we had decided not to frequent Seathwaite again.

Barbara, Leigh and James bravely cycled to Keswick circumnavigating the Lake whilst the rest of the party abandoned their planned walk and did a low level walk to the country inn in Stonethwaite for morning coffee. Ian, our brave leader, with Graham M returned to the Hut and spent the rest of the day there tending to the stove. We were very grateful for this selfless act when we returned to the Hut cold and wet later in the day.

Some of us gathered in the Scafell Hotel in the afternoon for the traditional watching of the six-nations Rugby match. We were met there by Graham B who had taken the bus to Keswick instead of walking. However, the bus refused to come all the way back to Rossthwaite becasue of the flooded roads so Graham had to walk some of the way in any event. He seemed very disappointed to find that no-one in the pub had a car to give him a lift back to the Hut after the match as we had either walked or cycled there. On our way back to the Hut we passed Ian and Graham in their car driving to the Hotel for the tea-time match only to discover that the match was on ITV and the Hotel couldn't receive ITV. What a disappointing day for the dynamic duo.

We had a wonderful evening meal courtesy of many people either cooking, washing-up, or in my case just offering moral support.

The flood waters had gone down on Sunday but it was still raining heavily so the cyclists abandoned their bikes and joined the walkers for a stroll around Buttermere, lunch at the cafe in Buttermere, and for some of us more Rugby in Keswick.

The weather didn't dampen our spirits and we had a great time. Farewell to the K Shoe Hut but who knows we might be back some day.