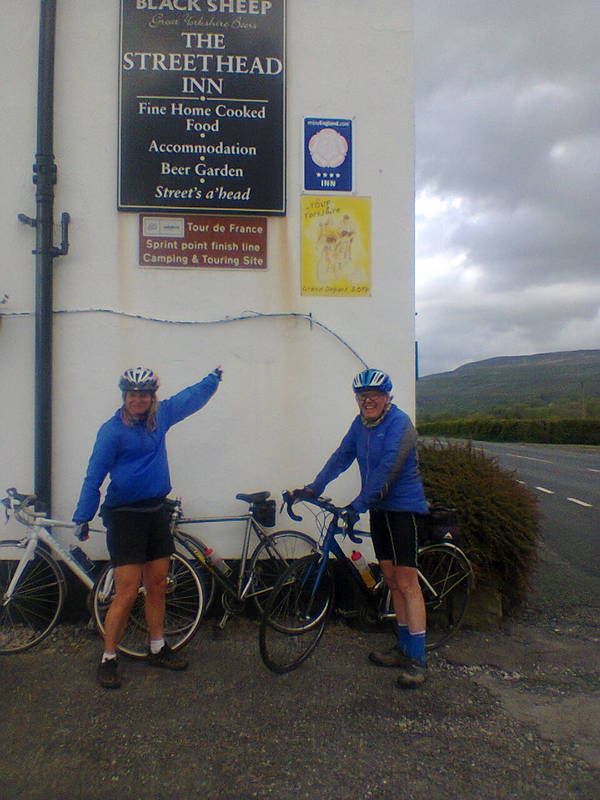 Bradley Wiggins broke the 1 hour record over the weekend but a less reported but nevertheless remarkable triumph was the seven SOC members who completed the 133 mile cycle charity challenge in strong winds. We shadowed the route of the Tour de France Grand Depart in 2014 using minor roads.

Five members of the cycling section (Barbara, Melanie, John, Paul and James) accompanied by Phil (climbing section co-ordinator) and Rob (a mountain biker) started at 6.30 from Grinton YHA. The moment we left the shelter of the hostel the wind hit us. Our outward route took us over the Cote de Grinton through Masham to Ripon for our first stop at the Sun Parlour Cafe in the Spa Gardens.

Our next stage was through Harrogate (nobody fell off on the Tour de France finish straight), past Almscliffe Crag and into the wind up Wharfedale to Ilkley. Barbara and I have often talked about cycling to Ilkley, staying the night and cycling back the next day - we didn't expect to cycle there for lunch.

From Ilkley we cycled to Bolton Abbey and then instead of taking the short cut to Grassington we cycled to Embsay and the outskirts of Skipton and then onto Grassington for our final cafe break. Suitably refreshed and on through Kettlewell up the Cote de Kidstones and onwards to Aysgarth. At this point we were tempted to take the short cut via Bolton Castle back to Grinton but putting tempation behind us we battled into the wind up Wensleydale. It was a relief to turn northwards over the Buttertubs.

At Muker we were met by a welcoming party of Judith, Laura, Liz, Pauline and Peter, who gave us seats, bought us drinks and generally made us feel good. After dinner we blasted down Swaledale back to Grinton, hardly noticing (lies) the climb back to the hostel. The ride came to 133 miles - the longest distance Barbara and I have ever cycled in a day and a lot longer than Bradley's 33 miles.

We did the challenge to raise money for the Skin Foundation in memory of Martin Burgess. There's still time to donate: https://www.justgiving.com/swaledaleoutdoorclub