Skye offers coasts facing every direction, and varying from sheltered lochs with little tidal flow, to exposed coasts and tide races. Something for everyone in almost any weather. 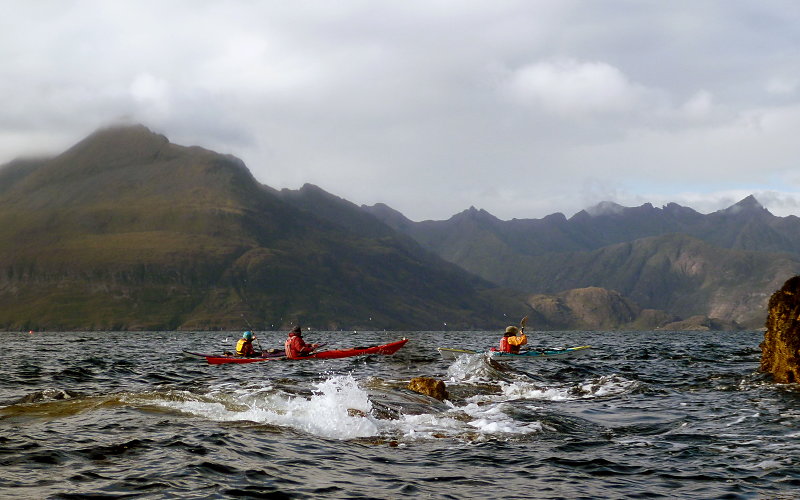 The scenery varies from excellent to awesome, both above and below the cliffs - below being quite literal as the coast abounds in natural arches and caves.

The Scottish Sea Kayaking (Doug Cooper and George Reid) guidebook shows only eight trips around Skye, but there are many more possibilities and endless variations. Tides are critical to some trips, which are therefore only possible at sensible times on a few days in each two-week tidal cycle. Others can take place any time with no tidal streams to worry about, though perhaps longer carries to the water on some days !

There's a map showing some of our trips with pop-ups for photographs. Not all our trips are on here yet, and there are more photos and tidal data to add - this is a work in progress.

There are a few writes-up of previous trips: Five days in Skye; Around Raasay and Rona at Easter and Sleat peninsula at Easter. There's a video of a trip round the top of the Island if you follow the links to videos from the Canoeing home page, or you can see it at higher resolution on youtube Rubha Hunish - Staffin to Duntelm.

Andy has been working out timings for a circumnavigation, which is 180 miles taking 9 days or so of actual paddling fitting in a two-week window. See his trip plan with map and timings.

Tidal port is Ullapool and all times are given relative to HW there.

Spring tides travel from Oban to Ullapool in about an hour, but neaps take more like an hour and a half. As Skye is about halfway, that suggests that times given relative to Ullapool will vary by about fifteen minutes over the tidal cycle, being a bit later than those given, at springs, and a bit earlier, at neaps. Information has been taken from the Admiralty Pilot (NP66) and the Imray Pilot - times do not always agree and in one or two places there is a considerable disparity, though the biggest differences are in locations where streams are not a major concern. Rates given are mean springs rates - neaps are typically about half. At Skye bridge, things are a bit complex, so we deal with that below. The table shows data starting in Loch Alsh and going clockwise round Skye:

At Skye bridge (Kyle Akin) streams vary widely between springs and neaps and also with wind direction, barometric pressure, and runoff from rain or snowmelt. In addition, local observers believe that times and rates have changed as the sea bed has changed over the years since the bridge was built, so information from the Pilots may be out-dated. Times and rates depend on the difference in level between Loch Alsh and Inner Sound. S/SW winds strengthen and prolong the tidal flow into Loch Alsh at Kylerhea, which will raise the level east of the bridge, as will rain or snowmelt, but low barometric pressure will raise sea level in the open sea - ie. Inner Sound, west of the bridge. As these effects tend to occur together, it is difficult to predict which will have the greater influence. Higher levels in Loch Alsh will make the west-going stream start earlier, run faster, and last longer with correspondingly later, slower and shorter east-going stream. Plan trips to allow for the possibility that the tide is not doing what you expect. Both effects being equal, a simplified view says: 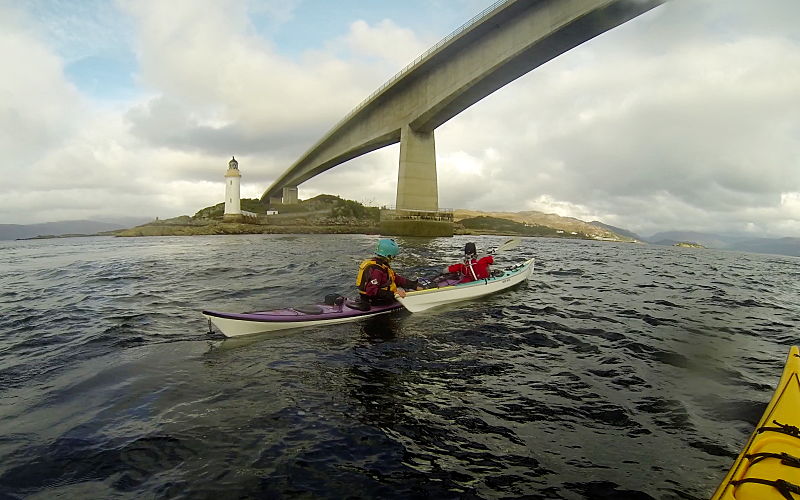