There are three sections of the Wharfe that the club has paddled in recent years, and some more downstream that we hope to paddle again, but haven't visited recently. The Middle Wharfe is a relatively easy trip (mostly grade 2) that goes without huge rainfall, with a few harder drops (grade 3) and rapids and one (easily avoided) much harder drop at the end (a good grade 4). The Upper Wharfe is harder to catch, as it needs more water (to run at grade 3+) but gets a lot harder in very high levels (top end of grade 4?). When it's good, it's very good, as it is quite fast, has no long flat sections, and has lots of ledge drops and rocky rapids. It's also easy to scout from the road and to escape from if the level comes up dramatically whilst you are on. As it is mostly dry in summer, there is no fishing, so it can be a good choice if the heavens open and it fills up - makes a good evening run down to the pub in Hubberholme !

The Upper Wharfe, and tributaries

The put-in is at Beckermonds (SD87408021) and the take-out (SD92677823) is river left in Hubberholme (after which the river becomes slower-flowing and possibly tree-infested for a while). Park right by the river at the take-out, especially on a Sunday, as the obvious convenient parking is for the church only. During the shuttle, it's easy to inspect any drops, and note a few landmarks. This stretch is about 8km, and drops 60m. If the level is good, consider driving further up the side road from Beckermonds to take in Green Field Beck as a warm up - you'll typically find you need to drive up to turn round anyway, and there's more parking at the top (SD85078022). It's a bit of a ditch, but is fairly fast flowing as it drops 40m in 2.5 km, so doesn't take long, and has one or two good bits, and only one stock fence which needs a portage (there was also a low rail across the river and a strand of wire just above a short drop, but both could be sneaked under at a sensible level). Just after the stock fence is a horizon line which marks a drop (at SD85088004) which you can't see from the road, so this came as a slight surprise: 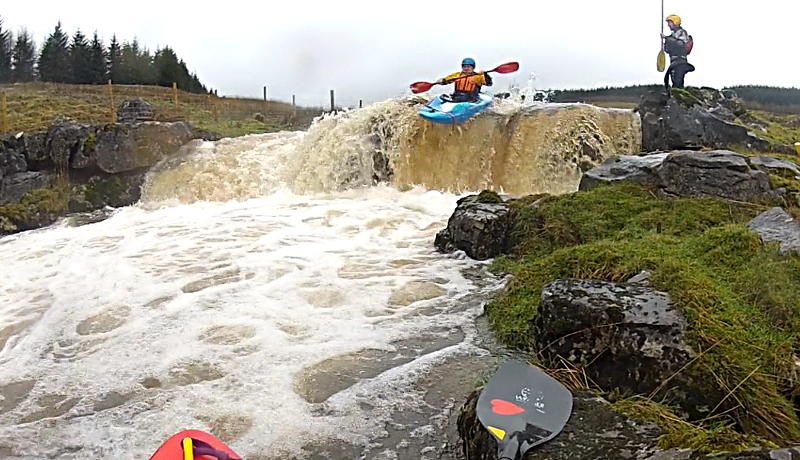 The footbridge at Beckermonds (just above the normal put-in) had nothing under it when we ran it, but looks as though it might get a stock fence at times, so approach with caution. Just below, on the left, Oughtershaw Beck comes in at a similar size (and also offers a possible warm-up paddle, shorter unless you trek up a bridleway for more). The confluence marks the start of the Wharfe proper, which starts off fairly gently.

Soon rapids appear, and a wide ledge drop that goes best on the left at low level. On the right is higher, with less water, which was our choice running it in higher water. The next significant drop is marked by trees both sides of the horizon line. At low water, the obvious line is a bit shallow, and a bit of manoeuvering close the right bank is needed. Even with more water, the straight run through is guarded by a shallow spot and a bit of a stopper which can make getting the exact line down the chute harder than it looks - a non-obvious line on the right again might help. It's certainly worth hopping out to inspect, anyway, as it is also quite photogenic. 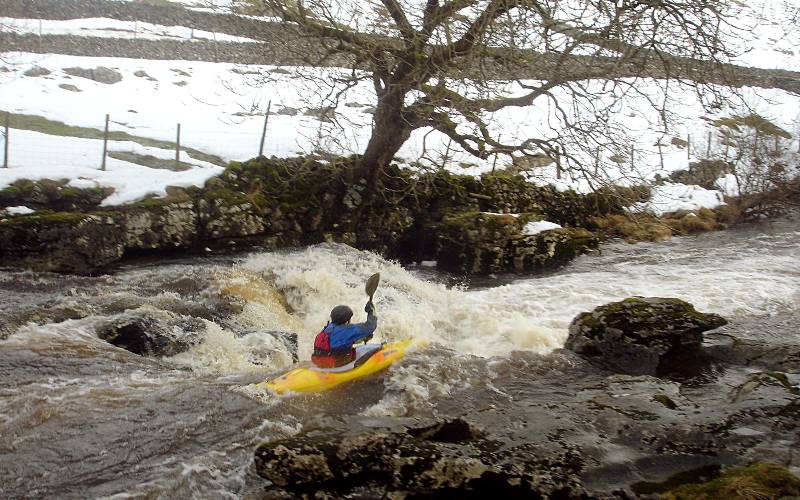 The river continues in much the same fashion for some time, with several ledge drops, not all straightforward, and a series of rocky rapids. A house on the right just before a footbridge (not marked on the 1:50000 map) marks one of the more challenging drops. 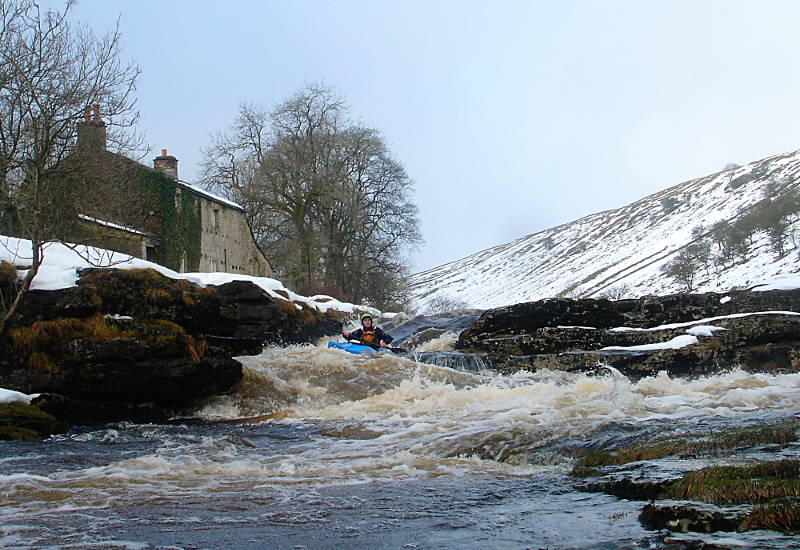 Another just before the road bridge at Deepdale is easier. About halfway from there to the next bridge at Yockenthwaite is another narrowing and a drop that forms a chunky wave. Eventually, the banks start to become more wooded, though interest is maintained almost to the end, when Hubberholme bridge hoves into view. The take-out is river left, immediately below the bridge.

With enough water, you can put in at Kettlewell, just over the wall from the car park, and the first section forms a warm-up. But there is nothing very testing here, and in low water, it becomes a bit of a slog down to the next bridge at Conistone (where there is limited parking, but it is free). For most trips, this will be a better starting point. It's then but a short distance to Conistone Falls, easily inspected from river left. The book recommends lines to the right (left hand side of the photo below), but this seems to have quite a stopper in high flows, so we chose a line boofing left. This is more technical (you need to pick a line with limited visibility, and there are slots you can drop into, which are less than ideal), but we had no mishaps on two trips, with quite a big group on the second. 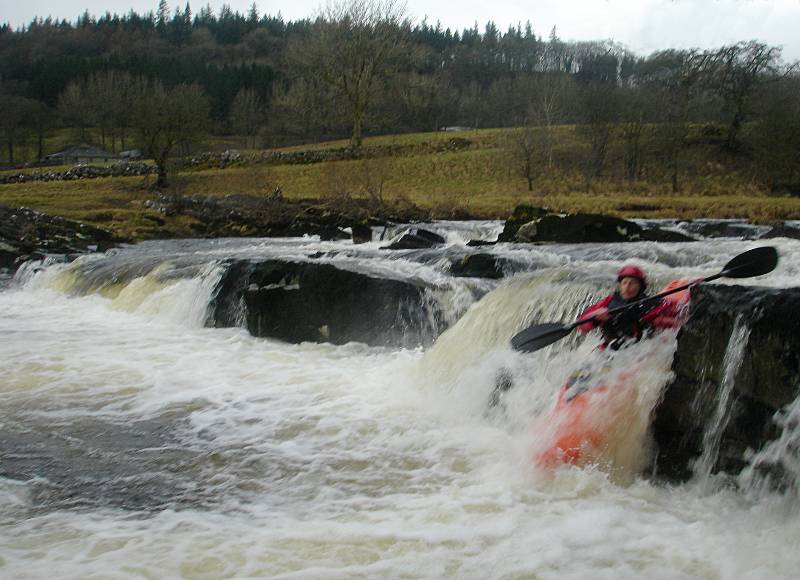 Even on the edge of a slot, there's nothing to eat you at medium levels.

The river now runs on fairly uneventfully for some time, past wooded banks and rather futile "no canoeing" signs, which are demonstrably incorrect, 'cos there was ! Eventually, the banks open up and ahead is Ghaistrill's Strid. All the water goes down a narrow channel on the left in low water, though a wider channel opens up on the right in flood. The left seems to be best at every level we've paddled. 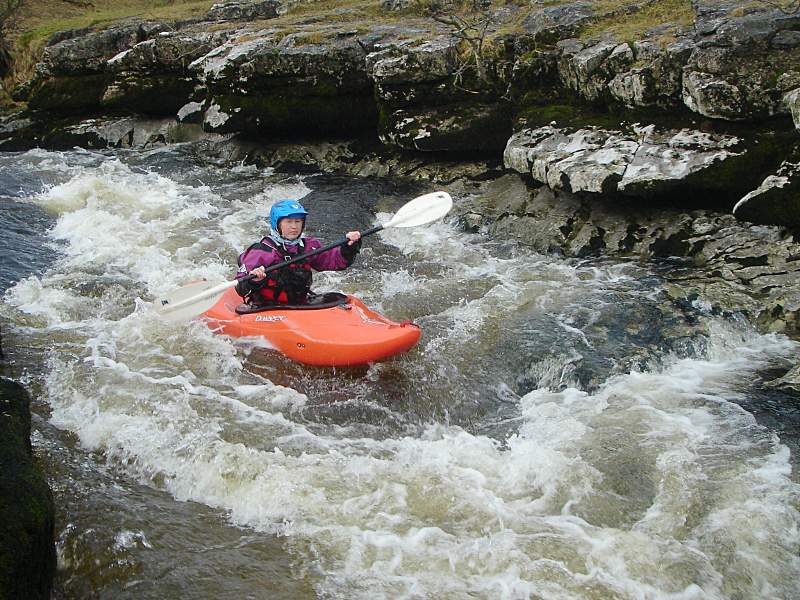 Bouncy rapids in a narrow rocky channel at the Ghaistrills

After a big eddy, the rapids continue, with some shallow bits and a rocky step. It seems best to head towards the right hand side down these, left is too shallow in low water, and there's something out to trip you up over there at higher levels. The river then eases off through Grassington, and under the bridge, but keep a good look out as the water flattens completely - the horizon line ahead is the first of two weirs. This first one goes far right, where there is an easy chute, followed by a big eddy. 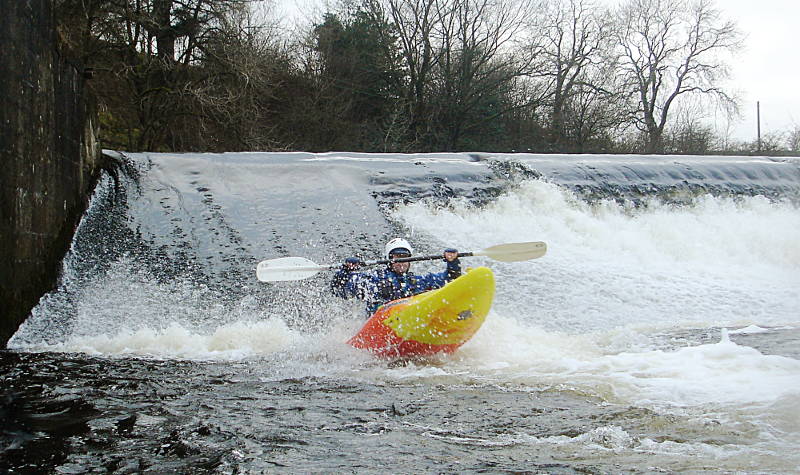 It looks a long way down, but the speed throws you over any stopper, and it's not fearsome

From here, it's a short way to a much wider, diagonal weir. This one's not very high, and vanishes completely, river left, so that's an easy line. If you're not running Linton Falls, get out on the left bank and walk over the bridge. In fact, do this anyway, as it is a splendid place from which to contemplate Linton Falls (and there are usually plenty of carnage-hungry tourists doing just that). 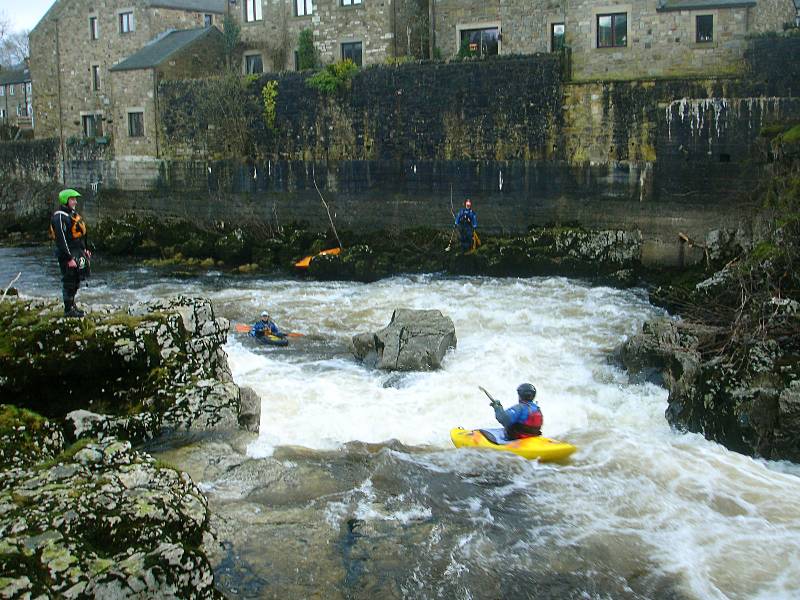 Making it down the first section upright (or rolling smartly) gives you the chance to line up for the bottom drop.

It's well worth inspecting all this - avoid the big rock at the bottom ! Then get out river left, and use the bridge as above. There's a pay-and-display car park in Linton for the shuttle.

Mostly a gentle meandering (and often slow, unless levels are up) section which has one nice rapid and one which is quite a bit harder than the rest, at Appletreewick. We put in river left at SE02586236, which is a 100m carry down a public footpath from a small parking space between Hebden and Burnsall. A mile downstream, there is much more parking space at Burnsall Bridge missing out one nice rapid. The take-out for this section is at Barden Bridge, where is a quite a lot of parking river left above the bridge (SE05255746) but it tends to fill up quite quickly with walkers' cars heading down into the Bolton Abbey estate and the Strid so get there early !

Half a mile on from our put-in, the river takes a tight bend round the projecting limestone reef of Loup Scar, which produces a nice warm-up rapid on which beginners can practice ferry glides and eddy hopping. 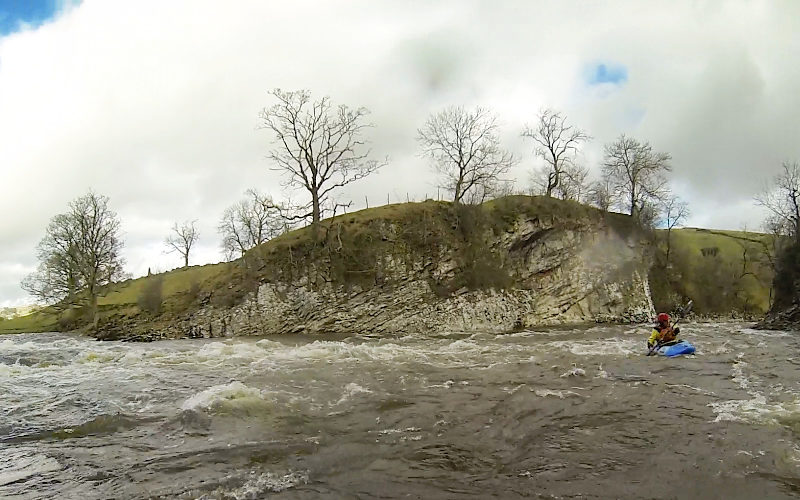 Another two miles of fairly gentle water with shingle riffles leads to Appletreewick falls, where the best line is right of the island, and most readily inspected by landing river right (where those who wish can portage). 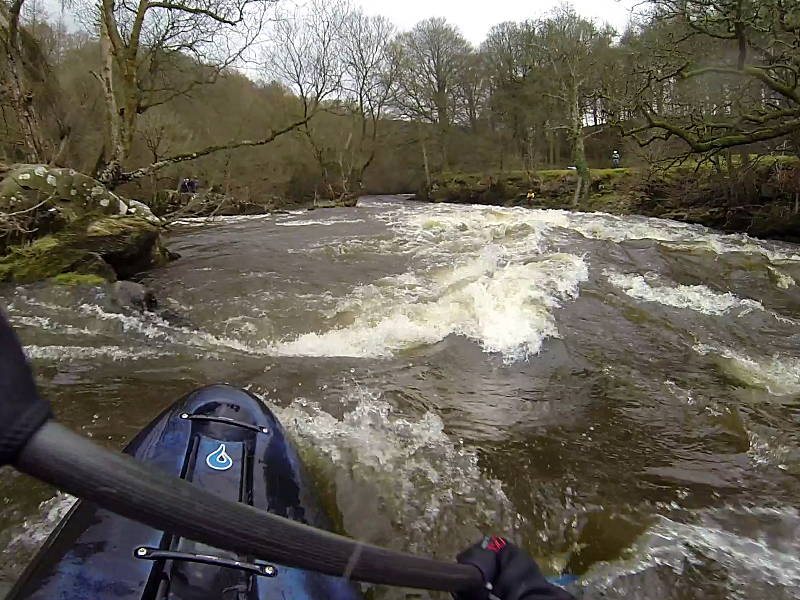 There can be meaty stoppers at Appletreewick - running close to the island got past the one in the right-hand channel.

At a level which makes the rest of the river go fairly quickly, channels both sides of the island at Appletreewick have some meaty stoppers. The right hand side has a bit of a tongue that might go, but a line close to the island gives the chance of passing the stopper on its left. There's an eddy to grab here, but missing it and ending up facing the wrong way would be suboptimal ;-) There are a few more easy rapids and a set of stepping stones in the final two miles to Barden Bridge. Don't miss the take-out here as downstream the river gets more serious and as this section is typically a beginner trip, you won't want to encounter the Strid !