Whilst it's hardly everyone's favourite, and hasn't (to my knowledge) ever appeared in the printed programme, the Upper Swale is our local testpiece with several significant waterfalls, and something a lot of paddlers aspire to. Nick Doll's Northeast guidebook suggests "simply portage the big drops and this becomes quite a pleasant grade III paddle, with several small drops to provide some thrills". Apart from questioning the point of paddling the Upper if you want a grade 3 trip, we should point out that several of the portages are themselves fairly difficult (including those for the two hardest drops), although it is good to have the option if the whole thing proves more exciting than you had hoped, and it's actually pretty easy to walk out from the top of Rainby.

The advent of online reporting of the Environment Agency gauge at Park Bridge means that it has become a lot more feasible to catch the river at a suitable level, thus largely avoiding travelling to find the river empty, or too massive to contemplate. A good level for a first trip on the river is around 1 metre on the gauge (some think this is a little big, but judge for yourself from the video). It's just about paddleable down to 0.5m, but anything less than 0.7m is reducing the number of feasible lines, and produces some hard landings. At 1.3m, the river is already quite a lot chunkier, with some big stoppers. At 1.6m, it's generally regarded as too big - mainly because when it gets that wet there are other things to go for that are even harder to catch at a good level. Having said that, however, the river was paddled (not by SOC paddlers) on the day the current gauge record (3.49m) was set, which was the day that people were seriously worried that Grinton Bridge was going to be washed out.

The Swale has a reputation as very fast rising (and almost as fast going down), so timing is critical to getting a good run, meaning the river is usually paddled at very short notice, and often midweek, and even then, levels can change a lot during the trip. Getting a competent group together quickly often means phoning around, and most SOC paddlers find themselves in mixed groups of friends from several clubs - whoever can get out on the day. The video included below was your author's first go at the river, in a group of five, with three of them non-SOC. This seems to be a fairly typical experience, though enough SOC members have now paddled the river that we could make up a pretty strong group if only we could all get out on the same day !

For those interested only in the waterfalls, it's easy enough to put on just above Wainwath, the first significant drop. However, for those who would like a bit of time to warm up, a layby up the dale, just beyond Hoggarth's Bridge at NY87000135 just above the confluence with Whitsundale Beck provides a better starting point, giving a mile of worthwhile paddling before Wainwath (this is what we did on the video). It's also possible to paddle down Whitsundale Beck itself if the water is a little higher. A small ledge drop at the start leads almost immediately to a bigger one of a metre or so which gives a taste for what's to come. Under the road bridge, then Whitsundale Beck adds its water and the train-ride commences...

A flattish section marks the run in to Wainwath Force. Local advice suggests keeping well right, to boof off a projecting lip. However, the approach is guarded by stoppers which take your attention and it is all too easy to find yourself neatly lined up on the corner slot, absolutely the worst point to go (see video!). Further left are more lines to boofs, but it is certainly worth getting out (river right) to have a look and assess the stoppers before picking a route to run. 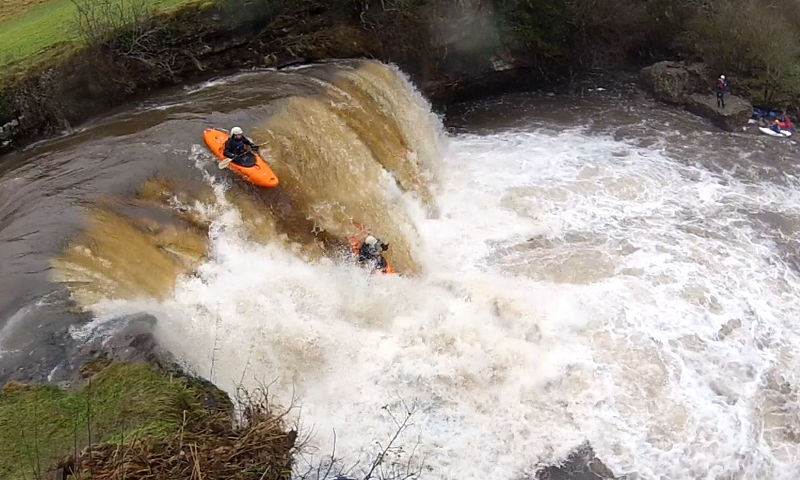 Dave Peel close to the ideal line on Rainby Force

Under Park Bridge the river flattens, and the gauge is passed on the left (worth a quick look, but by now you probably have a fairly clear idea of the level). Take out river right to inspect or photograph Rainby Force (difficult portage, right). This is given grade 5 in the guidebook, and the consequences of getting it wrong at low or very high water probably justify this. However at 1m, as seen in the photo, the line is not hard to spot, and anywhere close will be good, as the pool below is a relatively safe place to roll. Hit perfectly, the rock shelf which makes the right hand side dangerous is hit where it slopes and shoots you out clear of the stopper. Slightly off line and you will still be shot out, but not necessarily upright ! Further left goes at this level, too, as the water carries you past more ledges on this side. You tend to land hard from a boof, whereas pitoning results in being shot back and grabbed by the stopper.

With Rainby behind you, the next obstacle is a rapid with several options, including a straightforward portage to the left. Some people take it down the middle, others keep far right, and boof off the ledge as far forward as possible (the further out, the higher it is), landing in fast water, and aiming to cross towards the left. The main object is to stay upright, as this is not a friendly place to roll or swim. 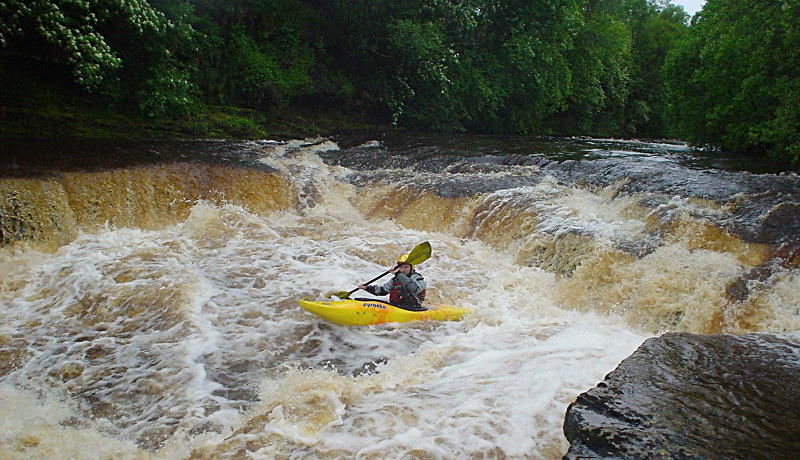 There's a bit of time to breathe now, as the river drops to pleasant grade 3 for a while before the next horizon line at Catrake Force. Land and inspect right - you can portage this side, too, though it's a bit of a walk before you can get back on. It's also an easy walk up from here to the carpark in Keld. Catrake is two ledge drops without benefit of much water to land in, and with subsidiary ledges waiting to trip you up, invisible beyond the horizon lines of each drop. On the first drop, there's a line right for the confident, boofing into a chute, and hitting an eddy on the right (all easier in lower water). For the less brave, or in higher water, keeping well left is a slight lottery with what might be out of sight, but will land you in water with time to get sorted before the second drop. The latter has even more little ledges to tip you over, so a bit of speed may help. On the other hand, you do get more time to roll up in the bottom pool with nothing too serious immediately downstream.

There's now quite a lot of generally nice grade 3 paddling, passing under a footbridge just before the cascades of East Gill come in noisily on the left. This is a landmark for the start of Kisdon Gorge, with its two significant drops. Take-out right to look at both - left gets a good look at the Upper but is a bit of an epic to view the Lower falls. Upper Kisdon is an easy boof if there is enough water to take it on the left, but the line is more technical if the water is lower. There's a reasonable amount of time and space to effect rescues at the bottom. 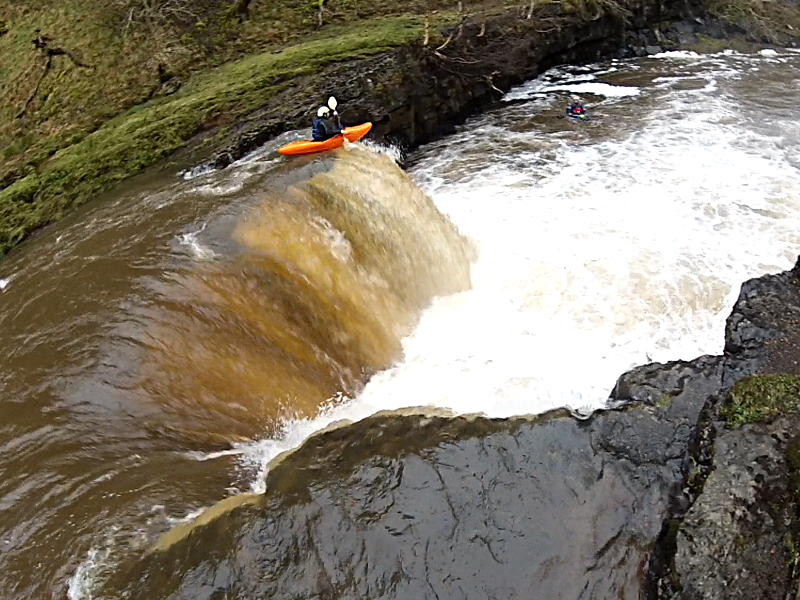 Lower Kisdon Force, however, is a different kettle of fish. This is the second bit of the trip that is given grade 5, and deserves it at all levels. To the left, an horrific slot would drop you into a nasty undercut, and this is to be avoided at all costs. On the right, a large ledge sticks out about a third of the way down the fall, and this is very much in the way at lower water levels. Right in the centre, a narrow tongue will take you down the full drop, missing the ledge and narrowly avoiding the undercut left wall at the bottom. The landing is very turbulent and a good roll is essential ! As the video shows, it's quite hard to spot the exact point to hit (the paddlers shown ran the middle line five times between them, neither stayed upright).

With a bit more water, however, enough speed can be gained to just clip the ledge on the right and land at a good angle to blast through the stopper and pop up (as seen in the video). Getting this wrong tends to result in your stern just clipping the ledge and neatly landing you head first in the plunge pool.

You can now take-out river right (awkward) and climb up for a long carry back to Keld (favoured if some of the party elected not to run Lower Kisdon, as getting down and putting back on here is really quite difficult). Alternatively, if there's a decent amount of water, paddle on down another 4km and take out below Muker, or another klick to reach Ivelet bridge.