The Wear is one of our local rivers, frequently paddled, and since we have members living close by, it's often one we do at short notice when the level is right. There are three worthwhile whitewater sections, over 40 km in total, and one touring section downstream of Durham which we tend to do every Boxing Day. The river is flashy - fast to rise and equally fast to drop off, so catching it at a good level is critical, especially for the upper section. SOC have had everything from bump/scrape trips to epic evacuations from a fast flooding river ...

Access: The upper isn't paddled often enough for any problems to have arisen, access is direct to and from public rights of way and we've never met anyone fishing whilst paddling this section. The middle and lower sections often have people fishing, but we have found them consistently friendly, and access is again direct to and from public rights of way. There is no access agreement to restrict the normal legal rights of access, though there seem to be one or two very vocal local anglers who object to canoeists on an unsubstantiated basis of bank erosion, though none of the access points described here seem even to offer scope for that issue. We've never been troubled by objectors on the river, and either of these two sections make good summer evening trips when the heavens open.

Although the river falls naturally into three sections, Wearhead to Stanhope to Wolsingham to Witton, there are other possible places to put on and take off to shorten a trip or to combine sections. The Upper, in particular, is a long section which can be difficult if the level isn't high, so intermediate put-on spots can be useful. However, since this is "favourite trips" and mostly we'd paddle each section as a self-contained run, we'll describe them as such here.

The Wear is a very changeable river, as a result of its fast rise and fall. Floods seem to move rock and silt, erode banks and even change the course of the river more often than on any other of our frequently paddled rivers. There are plenty of trees which can end up in the river, so do watch out for new hazards, don't expect everything to be described here! 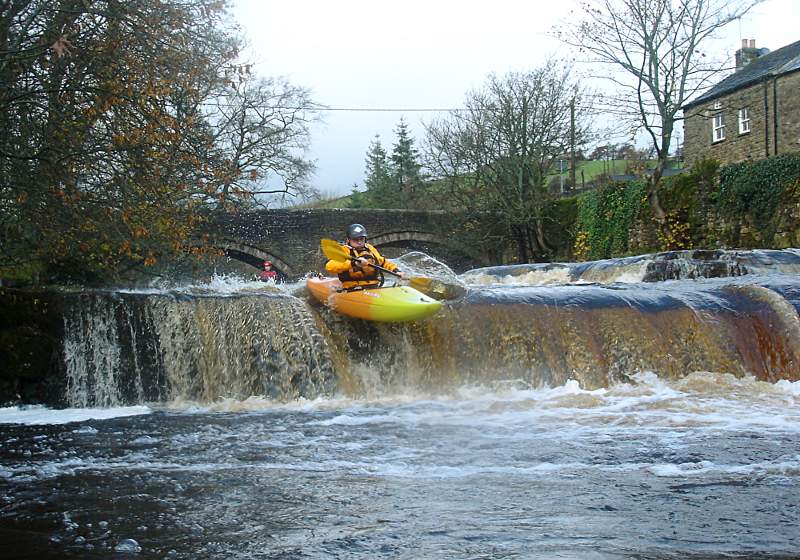 The Upper Wear, from Wearhead down to Stanhope, is the hardest to catch in condition. If it's not quite up enough, putting on to the bottom of the Rookhope Burn at Eastgate may still offer a trip. If it's high, it can be fast, and an early enough start will give time to continue down through the middle section to Wolsingham, but it's a long way !

There's a waterfall at the top, above Wearhead, which I don't think SOC have ever paddled, but it is well enough described on the UKRGB site. The rest of this section is easier, though never more than grade 3. 1.2m on the EA gauge above Stanhope seems a good level, but the more water, the faster it gets, and it goes a lot higher.

From Stanhope, the run down to Wolsingham is continuously entertaining, and doesn't need as much water as the upper (goes from about 0.6m on the EA gauge above Stanhope). It does still go up and down quickly, though, and there are some drops which form significant stoppers in high water. This is the section we run most often, as it is just a nice length and fairly consistent in grade.

A slightly longer section with less gradient and fewer points of interest, but enough short and slightly harder bits that it doesn't quite fall into the "ideal beginners' trip" category. There are also fewer intermediate access points, so it's harder to make a shorter trip out of it. Probably needs 0.5m or more at the EA Stanhope gauge. As we have very few photos at the moment, there's no page for this section, but you will find a description on UKRGB.

A touring section, mostly grade 1 with the odd rapid up to grade 2, the best near the end. There is an annual event here on Boxing Day, and SOC tend to paddle this as a social event with open boats (and dogs, and kids) as well as kayaks (after the competitive groups - we don't do unseemly things like racing). There's a description on UKRGB. 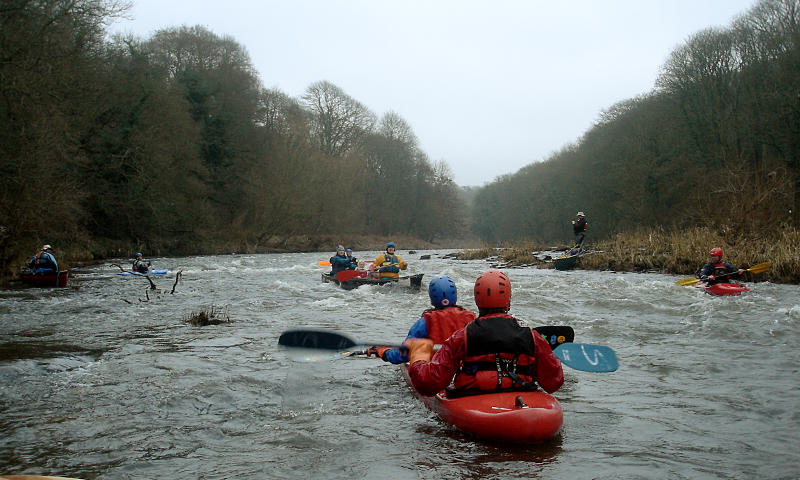 Yet further downstream there is a section to Chester-le-Street which some members have paddled with beginners' groups. This is all easy stuff, but Giant Hogweed is a significant hazard.

There is a weir downstream of the section to Witton, which is supposed to be a useful park'n'play spot. One of those places we keep meaning to check out, but as far as I know, no-one has got round to it.