Strictly, the Racing Section is between Eggleston Bridge and Cotherstone, but access to the river has been contested at Eggleston occasionally so if there is enough water, it is usual to paddle from Middleton. Having said that, we have never had any trouble, the lady in the house by the bridge has always been friendly when asked. Alternatively, drop down onto the river from the public footpath, river left downstream of the bridge. This OS Openspace map shows this put-in, as well as the take-out at Cotherstone. At Middleton, there are public footpaths both upstream (river left, nearer Middleton) and downstream (river right, opposite the auction mart), both of which provide convenient access to the river bank. Like Abbey rapids, the Racing stretch goes at a wide range of levels, but changes character considerably as the higher levels are reached. All of this stretch (and the one below) are covered in a single UKRGB guidebook page.

Gauge: It's easy to check visually at the take-out at Cotherstone, or by looking downstream from Egglestone bridge. If you are checking in advance, the gauge at Middleton-in-Teesdale probably gives the best idea - we have only run the Racing stretch a few times since the gauge data became available online, so we'll be able to give better guidance after a few trips. 0.58m was a bit of a bump on the section from Middleton down, but OK below Egglestone bridge. 0.7m was a good level from Middleton and moving well on the Racing stretch, where 0.75m was noticeably faster (although this run may have had more water than that difference indicates, if extra water was coming from the Lune and Eggleston Burn). 0.5 is probably a minimum level for a pleasurable run from Eggleston, and too low from Middleton, but the bottom part will go lower than that if you don't mind a bit of a scrape between the playspots.. In most conditions the actual numbers on the Middleton gauge and the Barnard Castle gauge are very similar. If the Barney weir shows an anomalously high level by comparison, it's reasonable to assume that the tributaries are adding a lot of water (and Cow Green isn't releasing and/or the upper dale is frozen). The Racing stretch will be higher than the above-mentioned gauge levels indicate in this case, so it is always worth checking both gauges.

Below Middleton bridge, the first section is generally easy with shallow, mostly shingle, rapids and only a few features of note. There is a gauging weir with not much of a drop, but at some levels, this can form enough of a pourover to stand a short boat on end, so those suitably equipped usually take time to play here. At other levels, the drop may be barely perceptible and not even enough of a wave to surf. It usually runs through without any effort in the middle.

About halfway to Eggleston bridge is a large rock just out of sight on a right-hand bend. At low levels the river nearly all flows right of this rock, giving an easy wave with eddy service from both sides. At very high levels, the rock forms a large pourover with a nasty hole, which can come as an unpleasant and unexpected shock to those expecting an easy run down this first section. At such levels the river is very fast with few eddies and often flowing among trees on both banks, so retrieving swimmers and boats can be difficult. The hole is easily avoided if you know it is coming (and there is a roar of water before you come round the bend and see it, so you do get some warning). Apart from this, even at high levels, there are no real problems - just shingle rapids and big wave trains.

There's a video (of SOC members paddling with DUCC freshers) showing the section from Eggleston Bridge on, at a lowish level, which gives a fair impression of where things tend to go wrong - it's only really on novice trips that anyone stops to get bank footage ! You need to see the river at a number of levels to find all the playspots, though.

From soon after Eggleston Bridge, the river steps up the pace and the grade, Initially there are still shingle rapids, but steeper now. A flat bit is marked by a large concrete structure river left, which is the exit from the tunnel which was built to bring water, via the Tyne and Wear, from Kielder reservoir. This is very rarely used, apart from an annual freshet to change the water in the tunnel, as the pH of Kielder water is very different from the Tees and the ecology is damaged by large releases. Since the industry on Teesside for which the scheme was intended to supply water has largely declined, paddlers should have no fear of a sudden torrent being released. 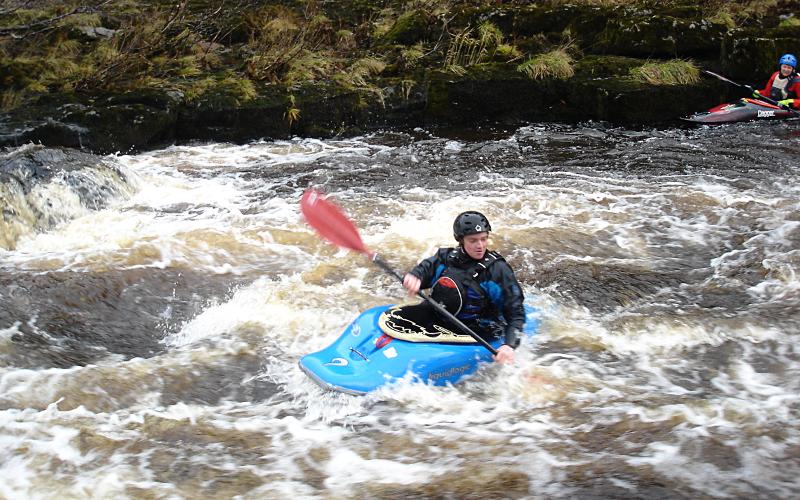 Beyond the tunnel exit, the valley sides close in and there are more bedrock rapids, creating a number of good playspots, the first, Tophet Hole, still within sight of the tunnel (photo above). In high water there are some big waves and a few holes to upset the unwary. Most of the more interesting rapids have enough slack water to pick up any debris below, and some have break-outs part way down to keep the photographer happy:

Johnny on the second main set of rapids

Between the most notable rapids, there is still plenty of bouncy water, waves and playspots, in anything other than the lowest water. 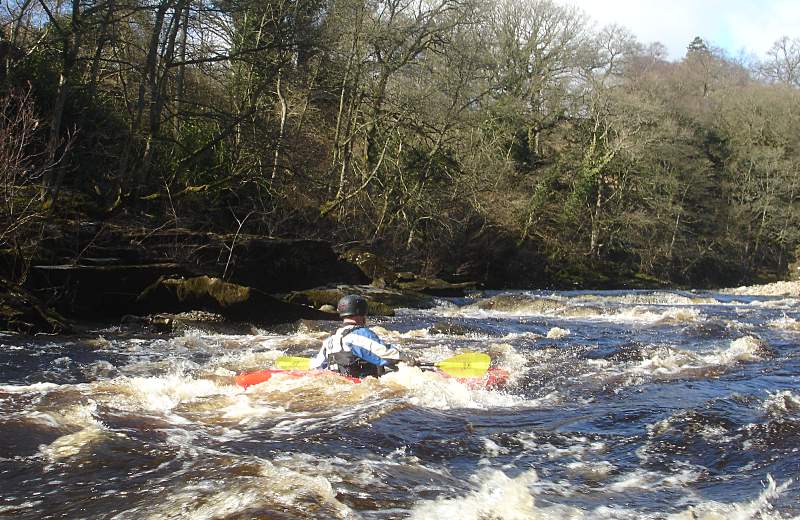 Pete Ball playing on the way down the Racing Stretch

A flat section ending in a right-hand bend where the water picks up over a boulder bar marks the start of Woden Croft rapids, which bounce down turning left and pushing the paddler out to the outside of the bend (right) where, towards the end, he doesn't want to be. 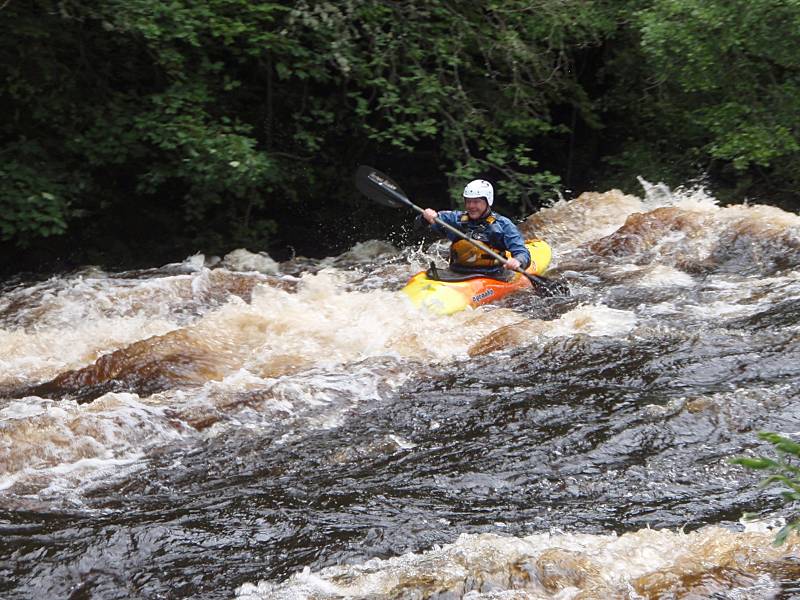 Terry on Woden Croft in quite high water, for midsummer

At lower water, boulders are more of a hazard than the force of rushing water... 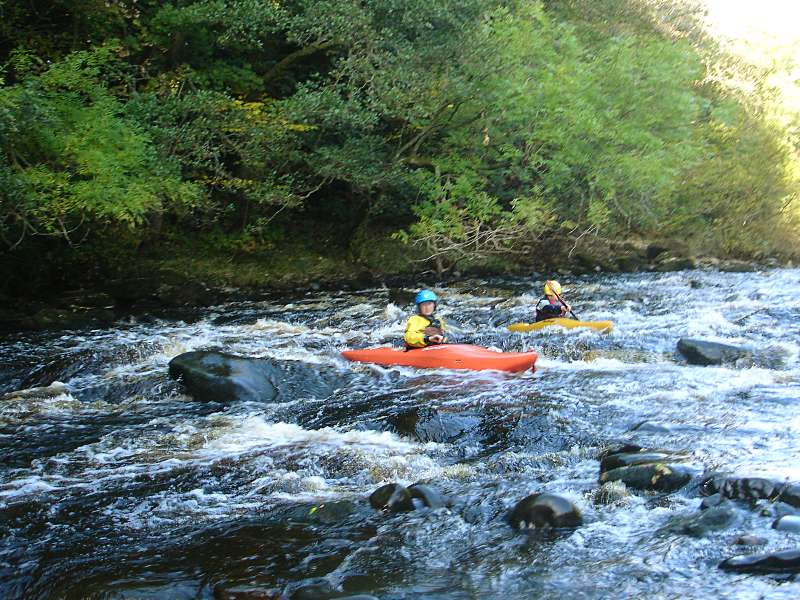 The very bottom of the rapid has a bit of a drop, which can form a meatier stopper on the right, has a couple of large rocks in the middle, and offers easiest passage river left. On the way down, a boulder garden requires paddlers to pick and paddle a definite line, especially in low water - indecision usually results in a pin or a capsize as another boulder appears ahead to trip you up. In high water, there's just one big boulder that gets people - you can go either side or boof over the top, as long as you are decisive, but remember to cut to the left afterwards. 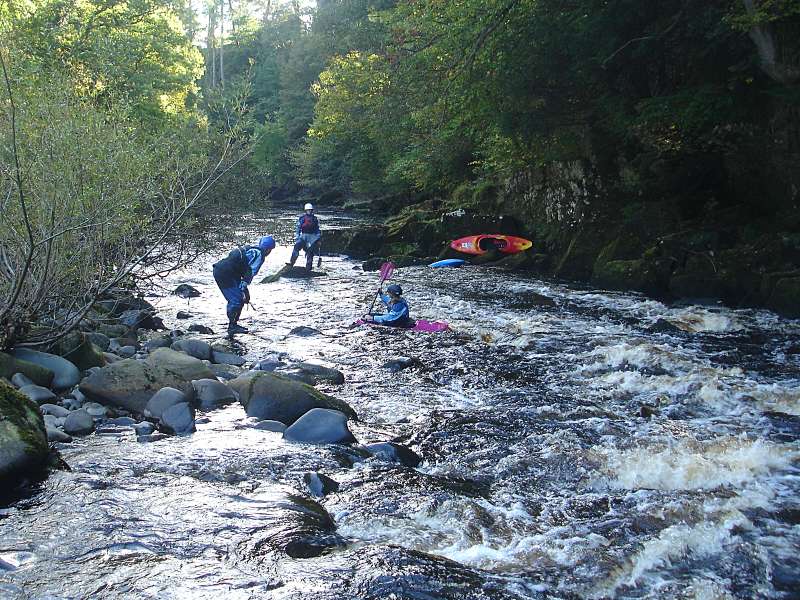 There's flat water below the rapid for a short while, but then the river picks up again for Fairy Cupboards Rapid. The Fairy Cupboards are small caves (short people can just about get entirely inside ...) but the eponymous rapid is bouncy, ending in a chute and some good waves. These offer the best playspot on this section of river at low levels, but can be less retentive as the river rises (better for tailies than surfing). At higher levels, different lines open up with more of a drop river right.

After Fairy Cupboards, there are a few more minor bedrock rapids and some longer shingle ones. After a number of big boulders river right (entirely avoidable, or fun to play among) there is a wave which works at most levels on the left. The final shingle rapids down to Cotherstone bridge can be very bumpy and scrapey if the level is down. The easiest exit is to keep left under the bridge then cross right below the willowy island and back upstream into a pool of slack water and the path. At higher levels, you can keep right and head for the footbridge over the Balder confluence to find a minor playspot, then hack straight down to the get-out.

At high water levels, the Racing stretch can be over all too quickly (even at moderate levels it can be done in twenty minutes), but for a longer trip, it's easy to carry on down to Barnard Castle or beyond to Abbey Rapids and Winston. If it was low and all is snowy and frozen, the big bank above the get-out can provide entertainment for those prepared to risk yakbogganing towards the substantial wall at the bottom.