The Pattack is reasonably accessible from either a western base (Fort William or Spean Bridge) or an eastern base (Aviemore or Pitlochry) within an hour's drive. Unfortunately it has no online gauge, so it can be a bit of a gamble if levels are marginal, and it's worth having a plan B. On the other hand, the level is easily ascertained from the main road, and the trip is fairly short, so it can be a trip to add to the day when travelling across on the way to or from another river.

Although the take-out is right at the main road (with plenty of parking), the shuttle requires a bit more organisation, as the track up is only accessible by obtaining a daily punch-in code from the estate office, to open the gate. Since you can't leave cars at the top, you still need someone to walk back up after bringing a car down. Some groups simply find it easier to walk up carrying boats from the main road, and for a very short trip or a quick repeat of the last section, an even shorter walk up on river right gets you above the last series of rapids and falls.

The top put-in is down a greasy peaty slope in the woods to a big eddy below the Falls of Pattack - a 10m drop that has been run but doesn't have a friendly landing. A large tree has been across the river very soon below the put-in for a year or two, but as the smaller branches rot and break off, it is possible to duck under this on river right if levels are not massive.

There follow a series of short rapids interspersed with no shortage of eddies. There's nothing above grade 3, with one wide steeper rapid being at the top of the grade and often a bit of a rock bash if the level is only just adequate for the rest of the trip. 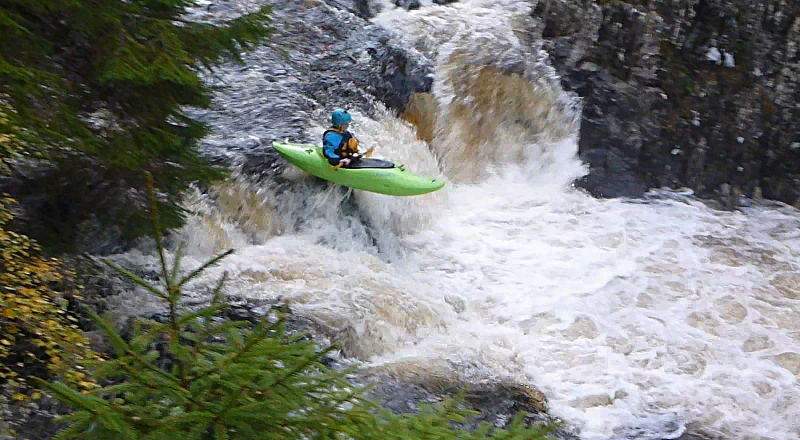 Boofing the waterfall right of the island

Soon you will come to a small island with a narrow technical rapid river left, or a waterfall river right. Left goes in lower water. The safer line on the right is to stay right and cut back in, below a meaty stopper, though this is less fearsome, and the line rather scrapey if the level is down. Those confident of their boof might prefer to take the fall direct and hope to clear the stopper. Setting up safety here is only sensible whichever line is taken.

More straightforward rapids follow, until eventually the river starts to turn into a bit of a gorge. 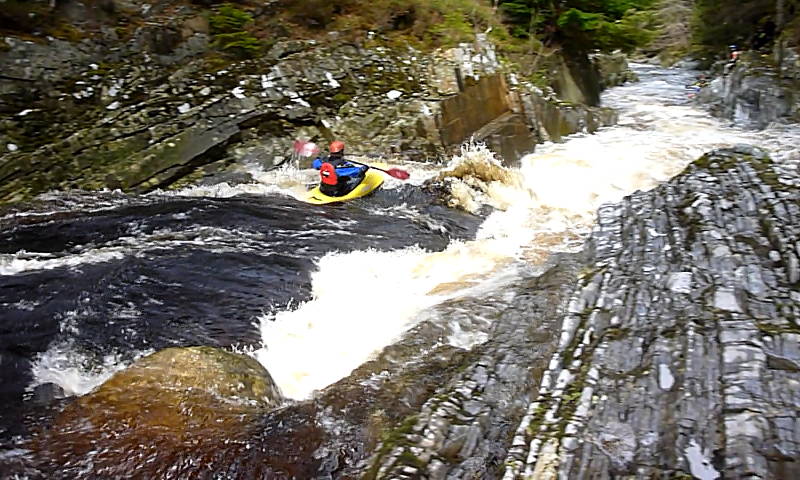 Michael running into the rapid in the gorge.

An eddy right allows for inspection of a steep drop with an interesting kicker, followed by an easier rapid. This is very photogenic. 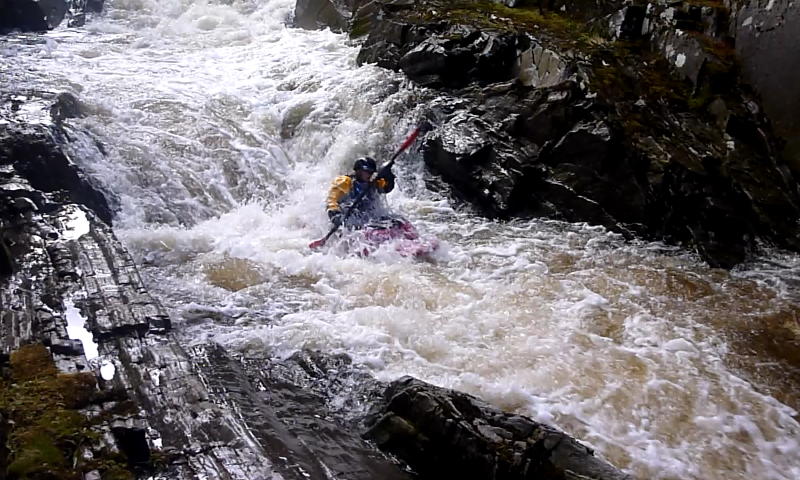 Sarah dropping the last bit of the gorge rapid

Finally, a huge boulder splits the stream. At every level we've run it, right is right, but it's not easy to see what's coming if you didn't inspect from the takeout before the trip and capsizes are far from unknown. Below lie some very boily eddies before a final straightforward and wide sloping fall into a large pool right by the road.