There are several sections of the River Kent, but the one we count as a regular favourite is the part from Kendal down to the A65 bridge, at Force Falls. There are harder sections upstream, but catching these at a paddleable level has proven difficult ! Never really a beginners' trip, the Kent is a good venue for paddlers happy on grade 3 water, wanting to get into a bit of grade 4, although all the harder rapids can easily be inspected and walked round if they look too mean on the day (they do get less forgiving as the water rises). The Kent is also often a fallback trip for other intermediate rivers, if levels are not high enough, as it is often runnable in fairly low water. For another view of this section, see the UKRGB guide. There's a video of one SOC trip (another is in the pipeline but not yet on youtube)

Gauge: The best gauge is probably the weir at Sedgwick, which is in the latter half of the trip. We've seen 0.55m described as low but runnable, but found 0.47m to be a nice level starting in Kendal (just one or two shallow wide rapids are a bit of a scrape lower down) and have paddled it lower, though often putting in at Scroggs weir or even above Prizet Bridge when the level is down. In 2013 we paddled at 0.40m and all the actual rapids were fine (mostly easier than in higher water), but Force Falls was definitely a bit more technical. Lower than 0.40m is not much fun, though we've scraped down as low as 0.36m.

There are a series of five very small weirs below the usual put-in in Kendal (SD518913 - for location and shuttle routes see the track on this Open Topo Map). These provide an opportunity to play and warm up. A flat section (good for wildlife) follows, to reach Scroggs Weir, where there is an alternative put-in river right with parking down a track from the main road (SD512905). Scroggs weir is very wide and is nearly always a scrape. It's best to peer over first, as there are some rocks to avoid on river left, which is usually the best side to run.

The river picks up a little, but there are still only easy shallow rapids for a while. A more continuous set of rapids, notable for a tributary coming in river right over a weir (mostly made up of the water taken out just upstream in a short leat, but there is a side stream too), leads down to Prizet Bridge, where an easy get-out river right allows inspection, or an escape to the road. 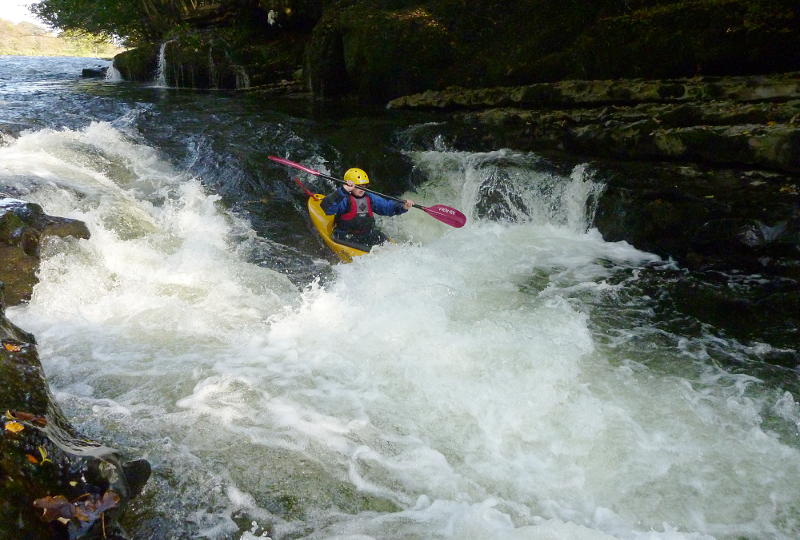 Left side of the tongue is a good line, as the rapid kicks rightwards towards a projecting rock below the photographer

Portaging is a little awkward, as the walls of the gorge make it difficult to put back in immediately after the rapid (although an exciting seal launch may work). This first gorge is fairly short though, and the river continues through easy rapids towards the top of Old Mill Rapid (aka Gunpowder Gorge). The remains of an old weir mark the top of this, and there are one or two bits of old steel reinforcing bar to watch out for right at the top (where the water is not yet too fast), easily avoided by heading for the first eddy on the right. Then comes a series of ledge drops, the biggest at the top - ferry right across to drop this on a tongue river left unless it's really high when a big hole forms on the normal line. This rapid can be quite full-on in high water, with some big stoppers, though the smaller ledge drops wash out. 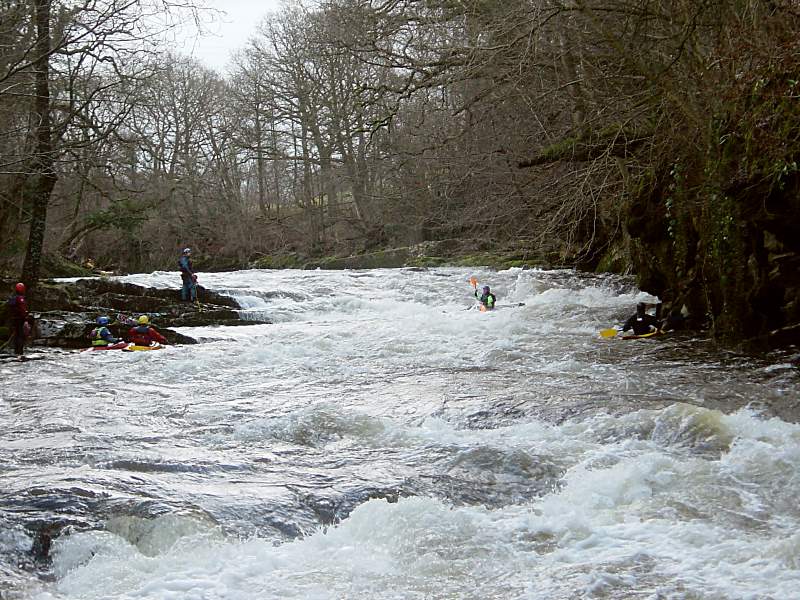 The top drop forms a big hole/stopper in high water.

There's a good breakout right below the first drop, with a landing beach if you want to provide some safety with a throwline or nip out and take photos/video (left of the photo above). Be aware that the rocks and banks can be extremely slippery here, and SOC members have had several falls ! A couple of the ledges lower down provide good playspots at most levels.

Below Old Mill, the river flattens and widens, with a few shingle rapids until a long footbridge high above the river is seen ahead. Very shortly beyond this is Sedgwick gauging weir, with the main flow passing over a wide slot left of centre. Shingle washes over this in flood, resulting in a large bank where it is dropped just down stream. This contributes to the formation of a large boil and huge towback on this section, which should be avoided at any water level. The usual route is to run far right, or portage that side (avoiding private gardens on the left). The river continues wide and shallow beyond, with an island best passed to the left. Soon another rapid appears ahead, with a remarkable similarity to Prizet Bridge. Again, a breakout right gives access to shallow ledges and an easy escape to the road, which might be a preferred option for paddlers finding the river to be towards their limit so far. Once you drop down into Sedgwick Bridge gorge, there is no easy escape from the following awkward L-shaped drop, and the final impressive fall. 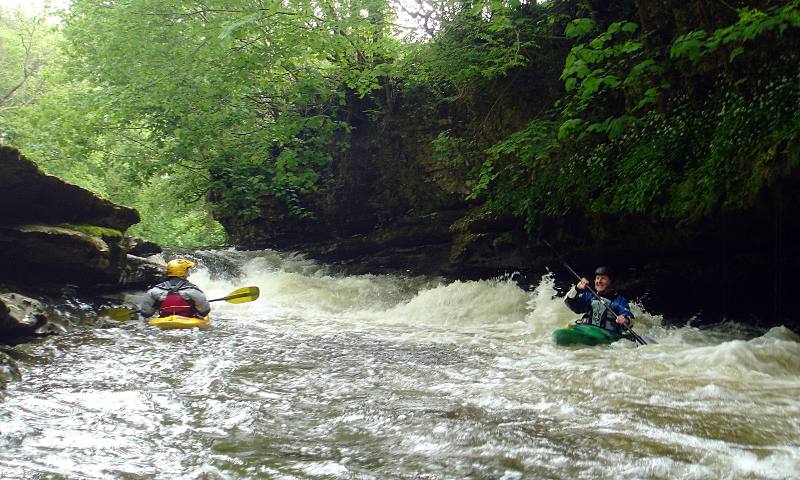 The rapid into the gorge has a bigger drop than Prizet Bridge, and often forms a big haystack, but the flow goes straight through the middle with no rocks impeding the route. A flat boily section follows, hemmed in by rock walls dripping waterfalls and cascades, which catch the sun beautifully if it is shining. Almost immediately after the bridge is an L-shaped drop, into a very aerated pool, and a nasty undercut right wall. The least hazardous route is to stay hard left (landing for inspection possible unless it is really high), and boof off the ledge as far forward as there is water, particularly avoiding the corner slot. 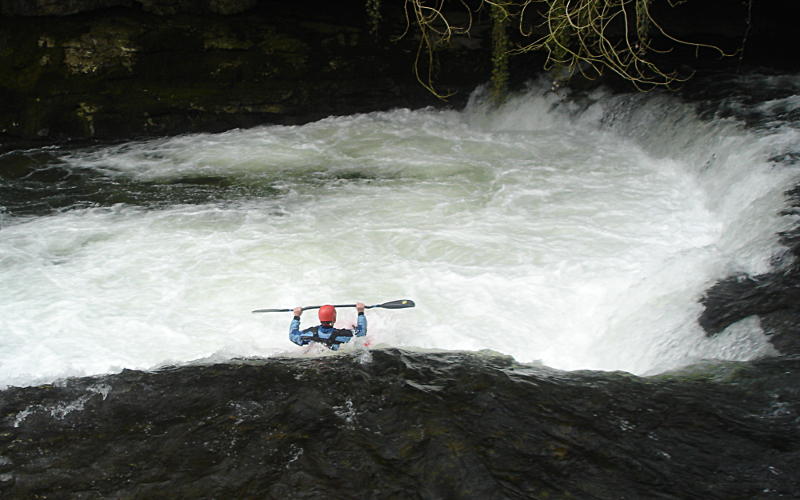 The L-shaped drop - off the left hand ledge to avoid the nasties. 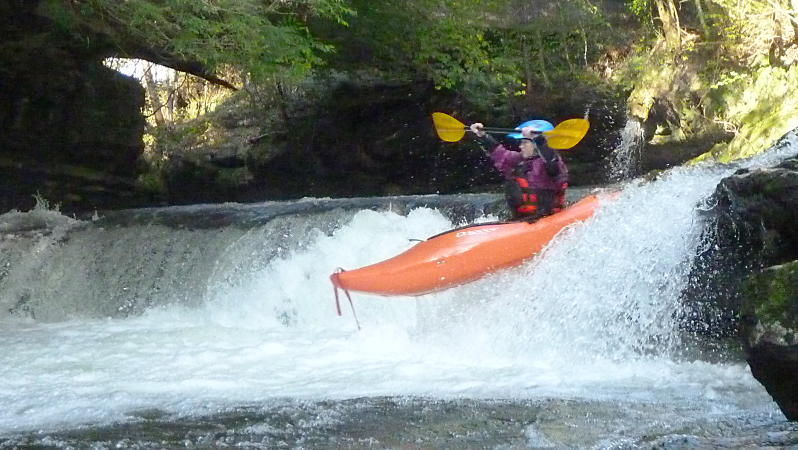 From below - the L-shaped drop is a good place to see the quality of your boof.

A short flat reach (keep left of an island) leads via a small weir, which needs watching as trees and branches are often found lodged. Right of centre is usually best. Recently this has indeed been blocked by timber, making the route right of the island necessary, dropping another weir. Landings are possible (if discreet) for a quick inspection of the final drop but it is frowned upon to land to the right, close to the houses. If the left-hand route was open, hte way down to Force Falls is fairly straightforward. If the right hand route was necessary, it's a little more awkward and you don't get as much time to pick the line into the drop.

The final drop, Force Falls, is the most spectacular, as the paddler finds a horizon line ahead which hides the route, until, suddenly dropping over that, the river opens very abruptly into a noisy cascade into a very aerated pool. This usually proves a lot less fearsome than it looks as the speed of the water just shoots you out to splat down and paddle on, often without needing even a brace. Keeping fairly far right over the first horizon line gives the best chance of hitting the ideal spot on the main drop. Avoid the left, as there are rocks to hit in lower water, and a capsize at the bottom in higher water will end up washed into the rock wall where rolling up is difficult, and there are some nasty undercuts. Too far right will usually see you deposited in a relatively safe eddy one way up or the other...

Sarah Waddington dropping through the tongue over Force Falls

Below the big area of slack water are shallow gravel rapids which form important spawning beds for fish too lazy or knackered to ascend the fish ladder (probably hungry as well as tired, which is why you'll often find fishermen here). Get out river right directly under the bridge and climb up to the concrete footpath above, on the upstream side of the bridge. It's possible to park either side of the bridge, though often less crowded on the downstream side reached via a minor road leaving the A590 dual carriageway on the east at SD499865.