There are two sections of the Duddon that are normally run, and only the lower, easier section counts as a club favourite river at the moment. This runs for almost exactly six miles (9.6 km) from a small off-road parking space by the bridge at Hall Dunnerdale, down to the take-out on the main A595 road at Duddon Bridge. There's a mile of grade 2+ water above this put-in if you want a slightly longer trip that's no harder. Above that is Wallowbarrow gorge, which is definitely a grade up on the trip described here. Here's a map of the run using OS Openspace.

There are two gauging weirs on the run, and both are online, so finding out if there is enough water is fairly straightforward. UKRGB recommends the gauge at Ulpha for which it reckons 0.60m is low, 0.75m is medium and 1.0m is high. Last time SOC ran it was a nice level, with the lower gauge (Duddon Hall) at 0.84m.

There's easy water to start, interrupted by the first weir after a short way, and this is usually run extreme right. The river then continues fairly easily until a right bend is immediately followed by a rocky rapid on a tight left-hand bend, Jill's Folly. This is a little awkward in low water as the only channel goes under very low branches on the outside of the bend, but gets easier with more water as more potential routes open up. It's easily portaged or inspected river left. 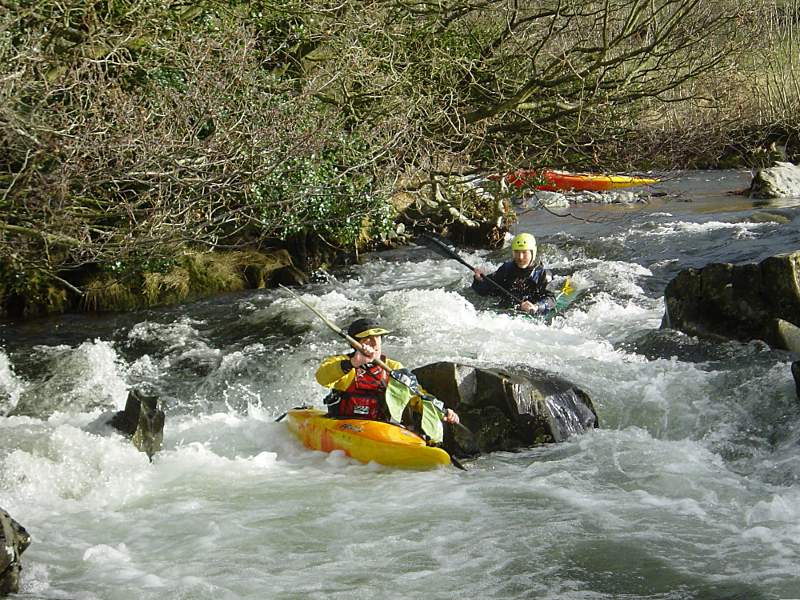 Both Petes taking the same line (as did Clive) on Jill's folly. Richard went under the branches and close to the pointy rock - maybe marginal in higher water

Another kilometre of pleasant and unchallenging rapids leads to the top of a boulder garden, Funnel Steps, which leads into a short narrow gorge. This is easily inspected (or, indeed, photographed) from the left, which is also the side to portage, if necessary. 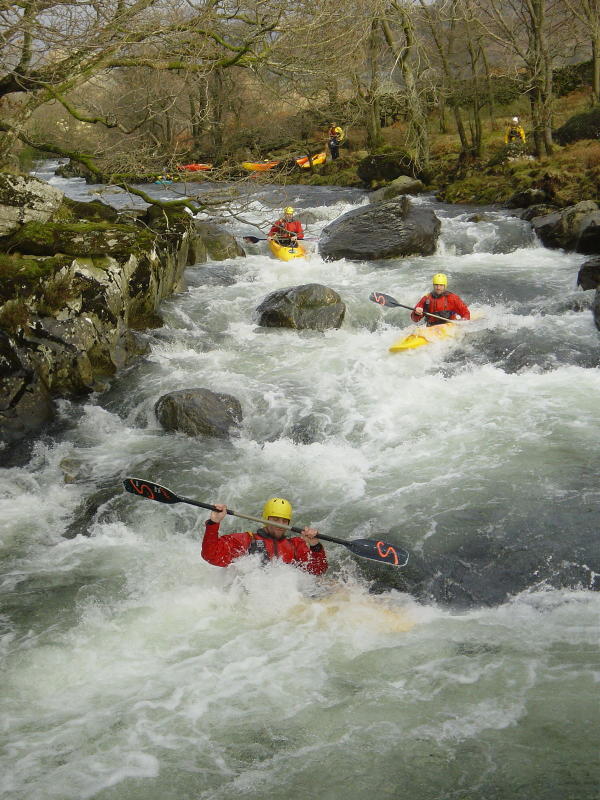 Clive (and all of us on that trip) ran the right side of the big entry boulder on Funnel Steps in 2003. At a very similar level (perhaps an inch lower) in 2009, we all ran to the left of it. The level was fine for either route, but a touch on the low side for the entry drop of the little gorge. 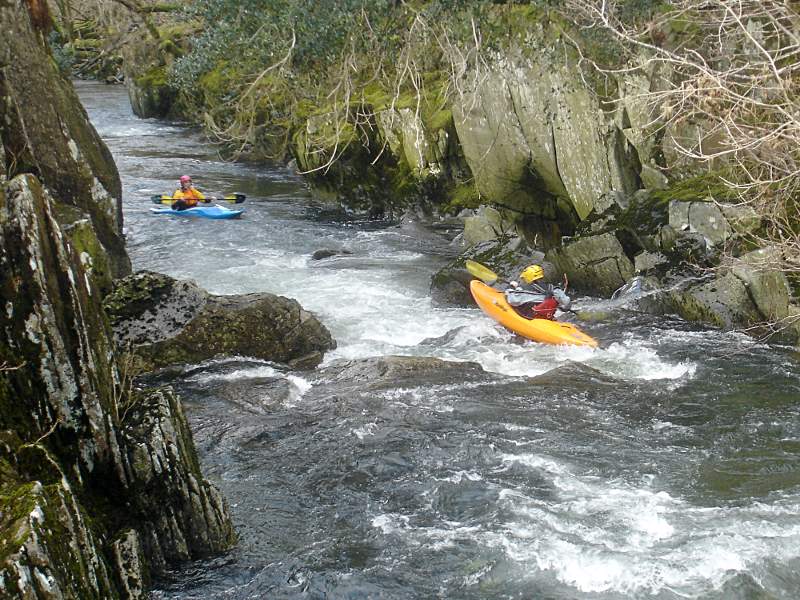 Jim and Doug in the gorge immediately below Funnel Steps

It's now not far to Ulpha, an alternative put-in for a shorter trip, just upstream of the bridge, river right. There's rapids here just before the bridge, then it flattens out for a while as it heads away from the road again. There now follow a series of fairly easy rapids, with a few good playwaves, before a slightly harder rapid as the river plunges into woodland. More similar rapids follow, until Rawfold Bridge can be seen ahead. Get out river right to inspect Duddon Hall Falls, probably the hardest rapid, dropping under the bridge. At some levels the river kicks hard left under the bridge, and there is a tempting eddy here, but it is very hard to get back out of ! 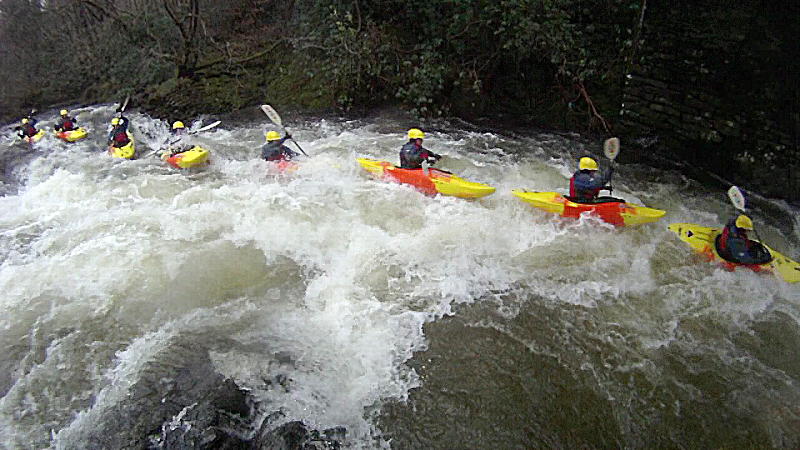 Iggy running the rapid down to Rawfold Bridge

Only a short way on is the second gauging weir, which is an easy portage river right. It looks innocuous but has a fairly uniform stopper blocked in at both ends so is worth a good look before deciding to run it. There's now only one more rapid, which kind of sneaks up on you, so I'm not sure which side you'd inspect - we've always run it blind having not seen it soon enough, and it is quite a different beast at different levels - most times fairly benign but occasionally needs a bit of rapid thinking on the hoof to micro-navigate. You're now almost at sea level and the river flattens out to the main road bridge, easily seen ahead. Take out river left just under the bridge, and cross the main road to a long layby on the minor road which goes up the valley.