Although it's not in our immediate area, the Keswick Greta is only an hour's drive from a meeting place at Bowes village hall, and is our most frequently paddled Lake District River. It's a nice grade (mostly 3) and fairly sustained with no long flat bits.The trip is continuously interesting without ever being very hard, though there are a few things to watch out for and the river has changed very significantly following the Storm Desmond floods including a number of fallen (or very unsafe) bridges. If the river is well up, swims can be long and bruising, but as we most often find it there are plenty of breakouts and rescues are easy enough. The fact that it is one of the few rivers where agreed access reflects the legal situation in allowing paddling 365 days a year certainly helps.

To protect fish spawning, the river should not, however, be paddled in low water in November or December. There's a useful white mark on the central pier of the bridge at the confluence of St. John's Beck and the Glenderamackin (which is the put-in) and the water must be at or above this to paddle in these months. If it is marginal when you get there, the Caldew and the Eden have both provided alternative venues in the recent past, and once when it proved much lower than expected, the Leven (out of Windermere) gave us a good trip without too much extra driving.

However, since EA gauges are now providing data online, a check before leaving home should avoid disappointment on arrival. The most useful gauge is Low Briery, but it's worth noting that this is a long way downstream of the put-in (more than halfway to the end). The gauge gives a good idea of the level for most of the important paddling, and experience suggests that >0.9m is a good level. 0.74m proved to be a bit of a bump in October. Be aware that there are a couple of significant tributaries contributing to the figure here and if the river is up because of recent rain, the level at the put-in may be lower than you'd expect. The rule of thumb is that if the Glenderamackin is up (indicating recent rain) but St. John's Beck (fed from Thirlmere) is not, then the river lower down will be at a higher level than you might expect from the white mark (and conversely, the level at the white mark might be too low to paddle in the restricted months, even though the level further down is quite high). If the Glendermackin is down, but St. John's Beck is up (which only rarely happens in summer), then the tributaries lower down will probably also be lower, and the overall level will be lower than you might guess. Overall, the Low Briery gauge gives the best indication of how the river will be to paddle, but is less useful to know whether you are allowed to do so, in November and December.

The other important thing to be aware of is that the Greta catchment has become infected with the Signal Crayfish, which threatens native crayfish populations, so it is important not to let your boat be a vector for the eggs of this invasive species. It is recommended to disinfect boats and other gear before using on another river, or allow them to dry out completely, inside and out, for a few days.

There are several possible take-outs in Keswick, our usual one being at the bridge in Fitz Park, but it is also possible to continue to get out on a little beach at the back of the Pencil Museum. This OS Openspace map shows the run and the shuttle, with the location of the Low Briery gauge whilst you can get an alternative river guide on UKRGB.

There is limited parking at the put-in and the road is narrow, so do try to get as completely off the road as possible as it can get a little crowded sometimes. Through the gate and down a little track river left downstream of the bridge leads to an easy put in from a grassy bank. There are usually eddy lines and a wave under the bridge to warm up, then the river leads off flat under the old railway bridge and round a bend. Watch out for occasional low branches, but mainly the hazards are a series of boulder gardens as the river repeatedly passes under the old railway from side to side. 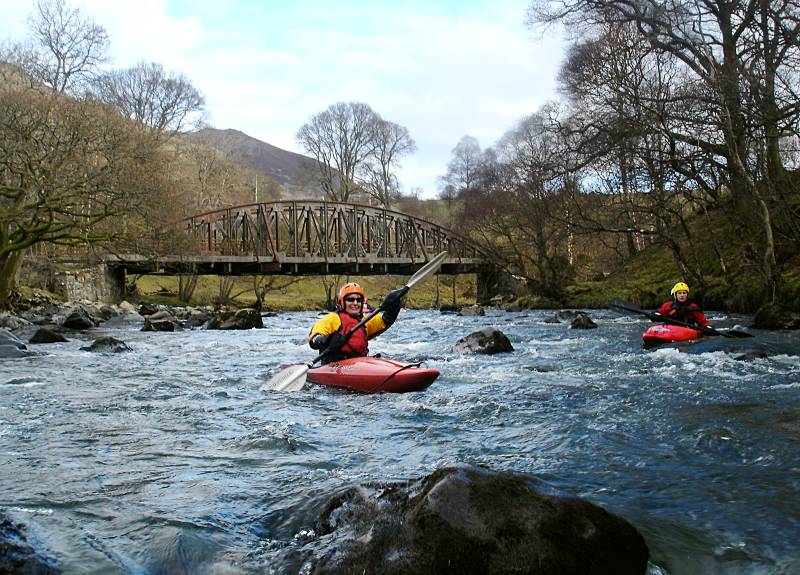 There are no memorable landmarks before "Magnetic Rock" where a course to the left needs to be maintained longer than you think, Drifting right looks attractive but you soon find the eponymous rock, behind which lurks a hole to trap the unwary. The hole can be played in, and there are more waves further down, so trips often spend a bit of time here. This is one section that has changed with the floods, and the magnetic rock is far less in evidence. Time will tell whether furhter erosion makes it repappear again!

A right bend with a cliff straight ahead marks a rapid which tends to change in big floods and then revert to its old form over time. Left leads to a big eddy, but setting off from here, you can find that the water flowing down the big shingle bank from your right tends to push you into the cliff - a popular place to capsize at some levels. Keeping away from the eddy and bouncing down the shingle and rocks avoids this hazard, though anyone with a shiny new boat may feel that they didn't want to abuse it that way !

An old broken weir was another significant block to progress, involving some intricate winding through big boulders when it is low, but this washed away completely in the floods, leaving a long, but fairly straightforward rapid. The Low Briery caravan park lies above a steep wall river left, and just below is the site of the EA gauge. The river bed was considerably changed here, so readings from this gauge are probably not comparable with those from before the floods. 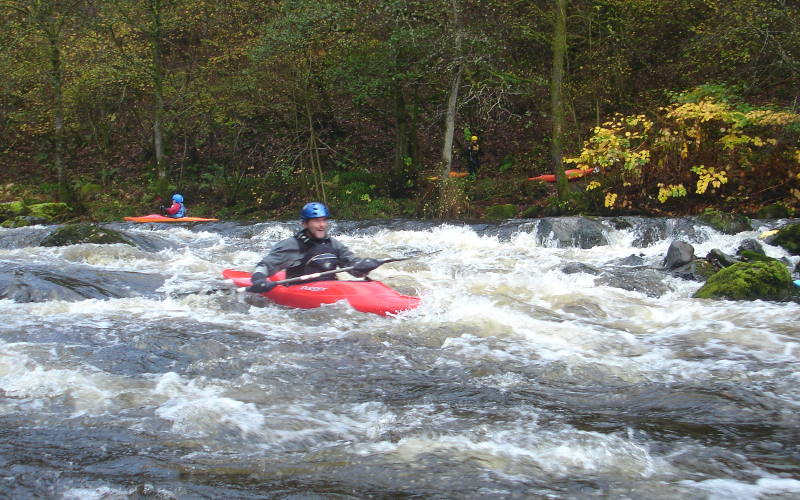 The river divides, with a narrow channel on the right often blocked by trees and branches - the majority of the water keeps left, as should paddlers. Soon after the channel reunites with the main flow, the river splits again. Left of the island leads to another old weir, and is not normally run, whilst to the right often has a rather rocky start which develops into an easier bouncy rapid further down. A flatter section then leads to a view of a packhorse bridge ahead. There is a meaty wave under the right side, which can be skirted by keeping left, or simply blasted through with some speed. The latter gives you more chance of making the eddy on the right, from where you can chance your arm playing in the hole. There are rocks which can modify your face quite badly if this has you and you don't roll up first go, so do take care.

The river eases off now, though it retains interest to the end. You can get out into Fitz Park river right above the new footbridge, or river right immediately under the road bridge, depending on where you found to park. Or continue down, via a small weir, to gain the back of the Pencil Museum (scope this out in advance, as it is not very obvious from the river).