SOC paddlers have been to the French alps near Argentière La Bessée (south of Europe's highest market town, Briançon) several times, most recently in every summer from 2008 (for hard paddling) onwards (later years featruring a mix of easy family paddling and some harder trips). Obviously, we try to paddle new things each time, but there are a number of good spots to simply park your car (or even walk from the campsite) and do some paddling without worrying about a shuttle (or an easy bicycle shuttle enables you to combine them).

The main river of the area is the Durance, which comes together in Briançon and flows on through some easy stretches and the occasional very hard section until it runs out into a big dammed lake at Embrun. The first slalom site on the river is right at Argentière next to the campsite and is a good place to just park-and-play, or to start an easier run down the Durance itself. The slalom site can occasionally be very crowded (and slalom paddlers take very different lines from recreational paddlers in creek and playboats) and on one day on our 2011 trip was reserved for competition for the whole of one day.

Whilst some water from the Durance Gorge and the Gyronde is free-flowing, a lot of the water at Argentière is dam-released, though the capacity of the dams is small enough that if there is rain or snowmelt, there will be a release, so the level is usually up in the afternoons. This means that the slalom site can be fairly benign in the morning for a warm-up, at which time the main run down the Durance may be a bit low. The course may be a bit more intimidating later on, but then levels are good for the run down to Roche de Rame and beyond. If there has been rain and then snowmelt, it may be quite high - this was how SOC first met it in 2008:

Most rivers which provide fishing are regulated and paddlers should be off the water by 6 p.m. This doesn't seem to apply to the slalom site, where you will often find people paddling in the evenings, which is handy if you've had a day doing one of the other activities in the area like canyonning or via ferrata. The site is also the end of two runs, down from the Durance gorge (the gorge itself is scary hard, but from the end of the gorge it becomes accessible and easier) and down the Gyronde, which needs a fair bit of water from snowmelt and joins the Durance just in Argentière village. As long as you are off these rivers by six, you can carry on playing at the slalom site until your arms drop off...

The Argentière site also has a lovely lake for all sorts of practice (the water can be cold, though) so you can sort your roll out for an hour or two, then move on to moving water.

Running down from the slalom site is easy water for about twenty minutes to a bridge. There's a bit of parking here river left. The next couple of hundred metres is a fine rapid for practicing ferry glides and breaks out in the faster waters of the alps (and it carries quite a big volume by the standards we are used to at home). At the end of this short section is a big rock in the middle of the river, which forms a pourover in higher levels (and a nasty hole at very high levels, so do check!). There's a sort of circuit to play on here, eddy-hopping up, dropping down and ferry-gliding back, using various river features, which can keep a small group amused for hours. In 2011, we were surprised to find the river just a little higher so that we mostly failed to make the return ferry glide, which meant that this circuit didn't work :-( There's a bit of parking river right just at this point, so you could park and play here, or just do short shuttles back up to the bridge, depending on what sort of practice or coaching you want to do. Although you get paddlers coming down the river, it is very rarely crowded, so offers plenty of scope if the slalom sites are too busy. You do need to be off the water by six, though, as this is a popular fishing spot.

Free parking, a paddlesport shop, café and practice pool, along with a little canal so you can paddle back up to the start of the rapids with minimal boat carrying, make this perhaps an over-popular spot. Be a bit careful about car security and gear left about. 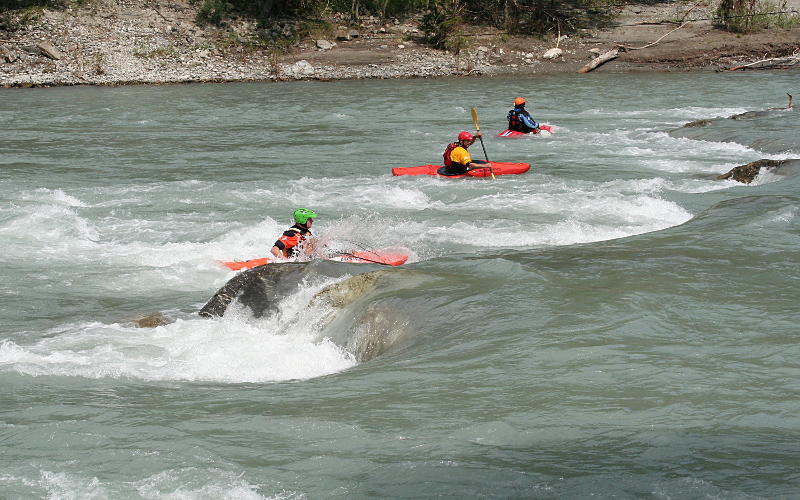 The site can sometimes be crowded, which can make playing on the waves a bit difficult, but a run down is fairly straightforward and the water is perhaps easier than at Argentière. A full carpark doesn't always mean a crowded site - the popular paddling and rafting run down to Embrun starts here and most of the people doing the Sunshine Run put on below the slalom course or just run down it quickly. Some days the site just seems to be empty (we had a Saturday one weekend and the Sunday a week later when no-one was about - it seems a bit random). Since this is the take-out for the Lower Guil and the put-in for the Durance Sunshine Run, it's easy to have a good play if you find it quiet when doing either of these runs. 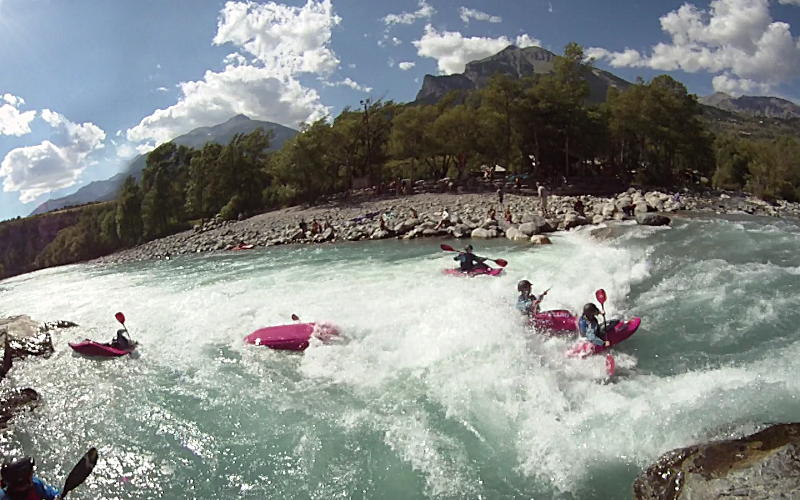 Brave enough to surf the Rabioux?

Part way down the Durance Sunshine Run from St. Clément to Embrun (nearer the start than the end) is one feature which is a whole lot more intimidating than the rest of the river. A significant drop with a big volume of water creates anything from a serious surf wave to a frightening hole, depending on level. People surf it at almost any level, and a swim is nothing to fear as swimmers wash through very fast. Indeed, you'll often see raft guides landing their clients and persuading them to jump into the wave, or taking the raft up into the hole where most of the clients (and very rarely, the guide) fall in. If this all sounds like a bit of a circus, that's about right ! There's a campsite, public parking and a café next to the river, and any number of spectators to cheer your success (or failure). Hardcore playboaters surf the hole and perform any manner of spins, loops and tricks with bizarre and unlikely names. Whether these are planned or fortuitous is anyone's guess, but it's great fun to watch, or to join in if you have a good roll. It's useful to have a "spotter" on the bank to warn of approaching droves of hydrospeeders or rafts as you can't see up over the horizon line from the eddies below. Although you should be off the main run down the river by six, as usual, the Rabioux Wave is an exception, and I believe it is floodlit to play until midnight. Don't swallow too much water, though - one paddler in 2011 took her first (ever) swim here and had to have a day off being sick a day or so later...