For a group based at Argentière la Bessée or nearby (maybe up the Gyronde valley towards Vallouise), there is lots to do: easy trips, park'n'play and harder rivers which test even the best paddlers SOC has to offer. We've briefly described the easier rivers and slalom sites, and won't presume to describe anything at the very top end - if you are paddling at that level you'll know that guidebook information is of limited value - you want to hear from someone who has been there this week. Here we give brief details of some of the rivers that are within the reach of the majority of those members who are paddling whitewater most weekends during the winter at home.

A steep and fast river, whose water becomes opaque in snowmelt run-off in the afternoons, despite being below a dam. Many groups take this on at "grade 3" thinking it will be similar to rivers they know at home, but the speed, small breakouts and shallow water over sharp rocks catch many out. The water temperature is very low, so dressing for the high summer air temperature will prove unfortunate if you do swim. SOC found it fast and exciting and were pleased to have no mishaps on either of the days we ran it in 2008 (lower the second time, as seen in this photo). In 2011 we ran with even lower levels, and one or two spots were a bit of a bump and scrape, with the weir a definite portage, but no mishaps. 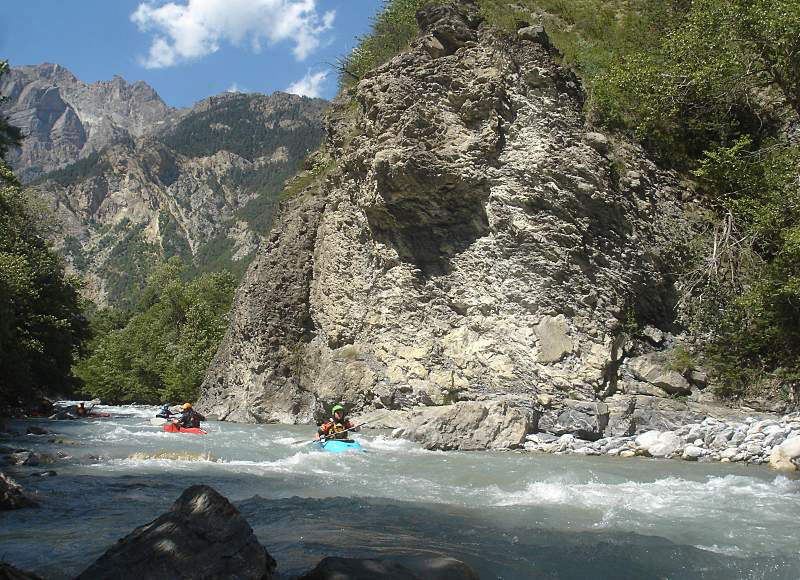 A short way below the start of the gorge (shown above) is a weir that requires some caution (inspect), especially at higher levels, and there ise no route at all when it's low. There's a photo of the weir at a higher water level (on our first run) on the 2008 trip report. Once into the summer, this needs time for the sun to melt snow higher up to rise to a good level, so many will paddle it late in the day, but beware that you need to be off the river at Argentière before six - paddling through the village is fairly obvious, and there is a substantial fine for being too late. The take-out is at the slalom site, right into the big campsite. This GPS track on Google Maps shows the section of river we paddled in 2008 (but not (yet) the shuttle route).

One of the two feeders to the Gyronde, this one runs clear and is a really fine run, over all too soon (though a second run is very tempting). At 27m/km, this was the steepest river we did in 2008. 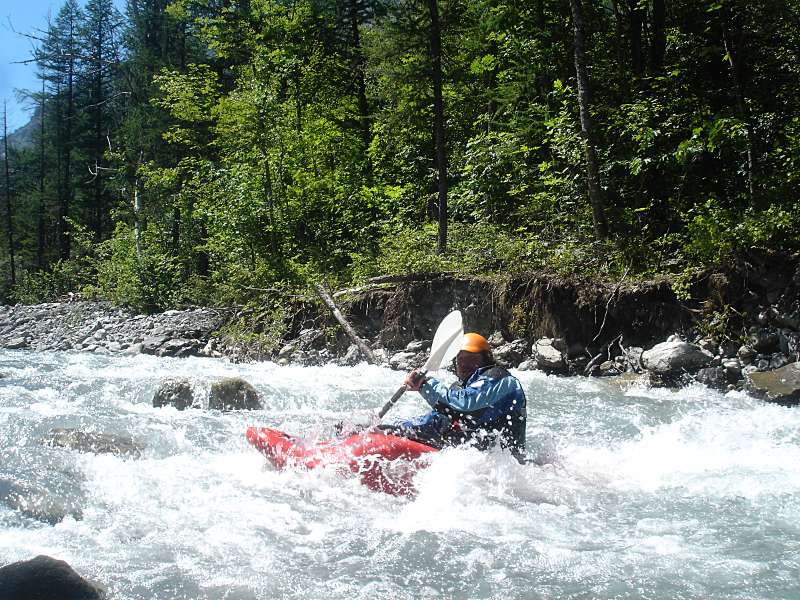 Stuart breaking out on the Onde

It didn't have enough water in 2009 (later in the season), whilst it had some interesting hazards the previous year, when a couple of big excavators were busy modifying the riverbed (see photo in the 2008 trip report). Don't paddle beyond the bridge (Pont de Gérénoine) near Vallouise as the river runs out into a dam whose water intake is a dangerous syphon big enough to eat and drown paddlers. Getting off river right just above the bridge is easy, and there is lots of parking here. Finding the way to the top (Pont des Places) was a bit intricate, and a cycle shuttle in the late afternoon (for a 2009 downhill walk looking at the river) was a really bad idea ! This GPS track on Google Maps shows a better shuttle route, avoiding some of the more obscure and thrutchy bits of the village. Higher up the valley than we paddled, the Onde has some serious falls and (vertical) boulder gardens.

Very cold, very fast, and no breakouts at all. SOC ran this some years ago and made the rule that once you swum, you got off - the icy water really meant that it would be unsafe to continue. It's also a very changeable river, with rapids changing from day to day, so inspection and bank support (who will have to run to keep up) is recommended ! It's not a fishing river, so people do seem to run this after 6 p.m. - in late season it may take that long to come up to a decent level. 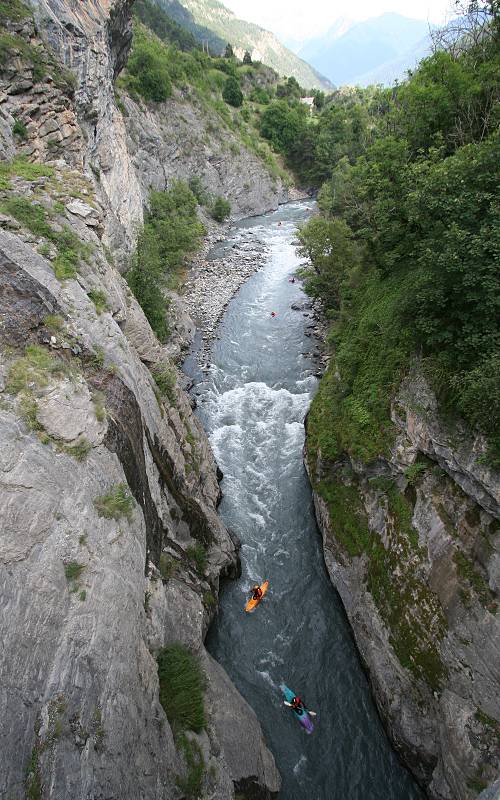 This is a superb long bouncy run with numerous boulder gardens and rapids. "Like the Keswick Greta on steroids" was one opinion in 2010. Our one swimmer in 2008 blames the hangover from celebrating our survival of the Lower Guisane... Neither of these trips had high water (both being late season), and the run has a more fearsome reputation among those who venture out in May or June. It's a popular rafting venue, so watch out for traffic - in 2011 one of our groups was held up for quite a long time as a dozen rafts came through, and their guides had clients swimming down what was for kayakers one of the key rapids. The run finishes in a fine (but easy) deep gorge under a much-photographed bridge (see the 2008 trip report). The take-out is river left shortly after - the river changes to a committing grade five run further down.

Having waited for the sun to melt enough snow, and then run the longish Upper Guisane as a warm-up, the Lower proved enough of a challenge that we had to get off the river after getting two boats pinned and fannying around until after six O'Clock when the anglers have priority (and there is a hefty fine for being caught paddling the river). The trip was continuously fast and steep, with few breakouts, and even fewer with room for more than one boat. There is one weir near the start, in the dark under a bridge and this is recommended as a portage. Further on is an enormous weir which most people portage, but Pete and Stuart both ran this (despite dire warnings about reinforcing bar poking out..).

The video clip shows Stuart's run and encounter with a rock at the bottom. Further on there are some quite hard rapids, and, in 2008 after various floods, quite a few tree blockages to carry round. The clip includes just one of these rapids as we were becoming very pressed for time and photography took a back seat. In 2011, in much lower water, a group (including kids in playboats) ran it as more of a technical boulder garden and found it relatively benign.

The club hasn't done the gorge recently (it needs more water than is typically available by July), but has had a look from a via ferrata high above. The gorge is very committing and has a must-do portage high on a scree slope which is enough to put most people off. 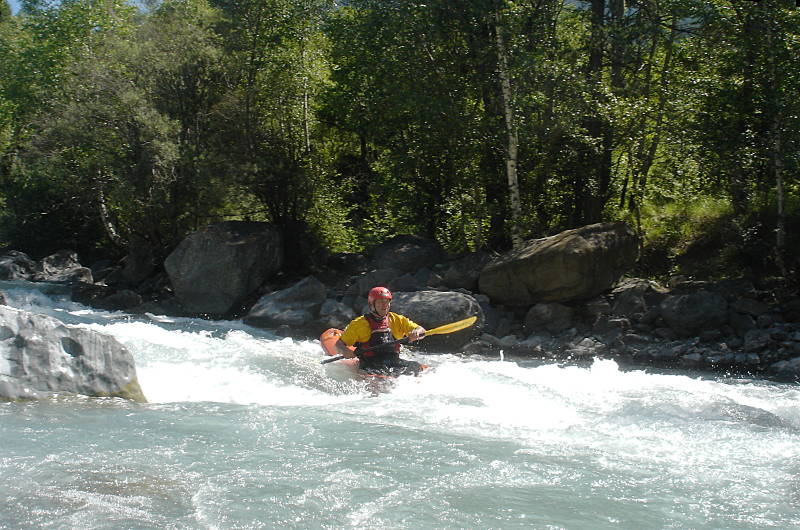 You can get up into the gorge from below (where the via ferrata starts), and this is a much more reasonable proposition at grade 4- with a lot of water, nowhere much above 3 as we have found it (twice, in 2008). In 2010 we had a look, but the level was far too low - in late season it needs recent rain. This GPS track on Google Maps shows the section of river we ran in 2008 (but not (yet) the somewhat obscure shuttle route). 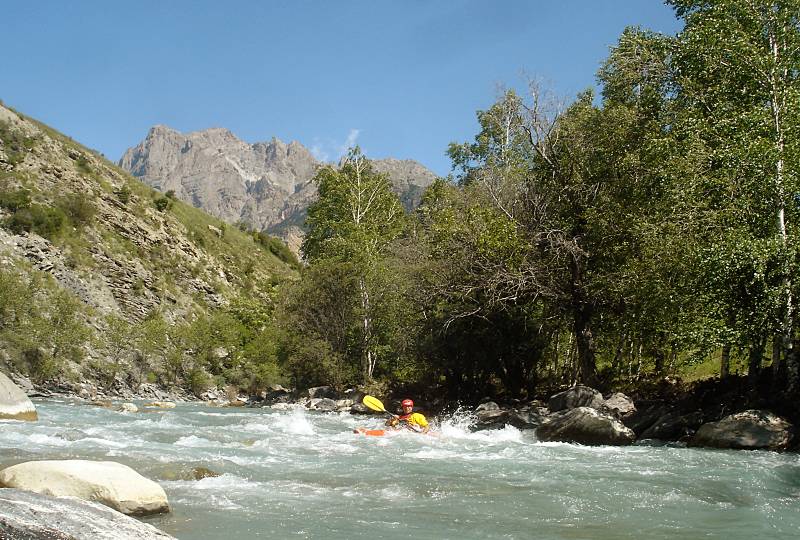 The run drops down to a confluence with the Gyronde above Argentière, and continues to the slalom course, often increasing in volume considerably as it passes the outlet for the hydro scheme which limits the amount of water in the gorge itself (water also comes into this scheme from the dam on the Gyronde, through the huge pipeline spanning the gorge).

Many people get away with a guidebook and a road map, but bigger scale maps help, especially if you are looking for good ways to cycle shuttle. If you are ancient and have old maps left about from alpine trips, the "Carte Touristique" (Serie Violet) sheets 244 and 245 cover everything described here except the upper Ubaye, but there are some changes to the roads (and footpaths, as we found...). The modern 1:25000 (blue) maps are good: 3536OT "Briançon" and 3537ET cover most, but the sunshine run cuts across the corners of 3437ET and 3438ET too. The latter is needed for parts of the Ubaye, though 3538ET is the main map for the Upper Ubaye. 3436ET "Meije, Pelvoux" is upstream of the easier rivers, but shows the best walking area for a holiday in this area.

For British paddlers, the obvious guidebook choice is "White Water South Alps" by Peter Knowles (Rivers Publishing). There's a French guidebook available locally, which is good for the harder runs (it doesn't deal in any detail with anything less than grade 4). "Guide Kayak Caskaboulons: Alpes - Dauphiné" (éditions le canotier). This is mostly graphical, and the key to symbols comes in several languages (including english), but some of the icons defy description - one apparently meaning "cooperate with people alongside the river" shows a beret-wearing cigar smoker toting a blunderbus and looking as though he is keen to use it... There are wonderful icons for "if there is not enough water", "if that was about your grade" and "if there was too much water" and suggesting alternative rivers. These are not always to be taken seriously, one river has suggestions of "Côte du Rhône", "Bourgogne" and "Bordeaux"!