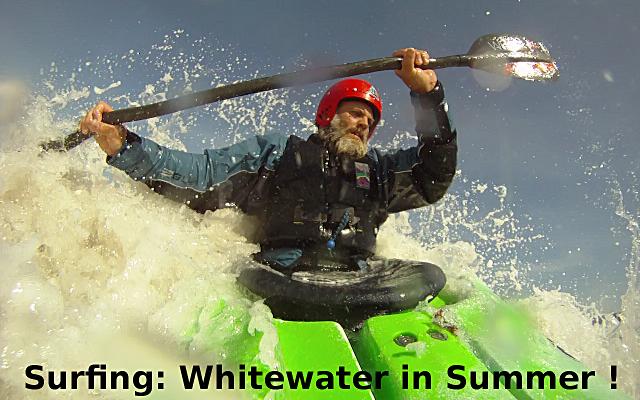 Traditionally, the club does "trips" at weekends, and when we programme "surfing" it is usually on midweek evenings when the state of the tide is such that the Tees Barrage does not run (ie. high at Teesmouth). Quite often, however, if rivers are low, or the sea is too rough for a trip out, a meet will get changed to spend part of the day surfing. Mostly, people take plastic river boats - we don't get consistent or good enough surf for many people to think it worth investing in a specialist surf boat. 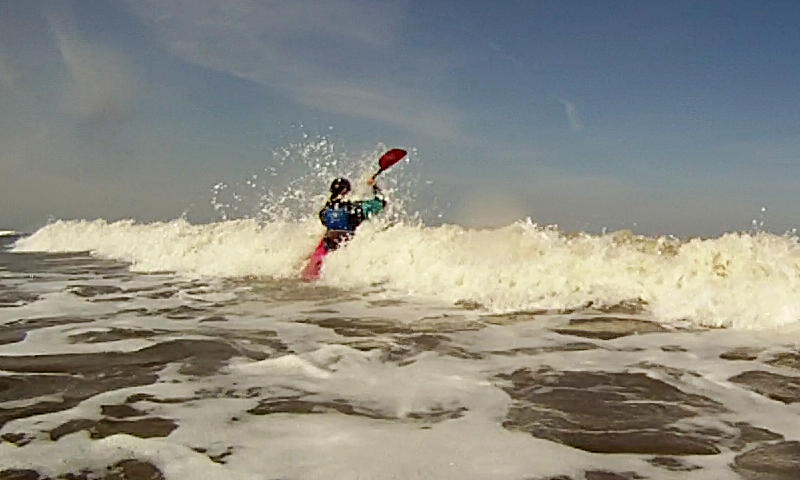 Paddling out through two or three feet of surf can be exhilarating!

Catching the wave is the aim - once you've got used to the acceleration...

Of course, sea kayakers need to be able to handle surf, even if they don't have the play potential of a short boat, so you will often see a few sea kayaks on surfing trips. The photo below is a still from a video that features in Surfing the club Anas Acuta. 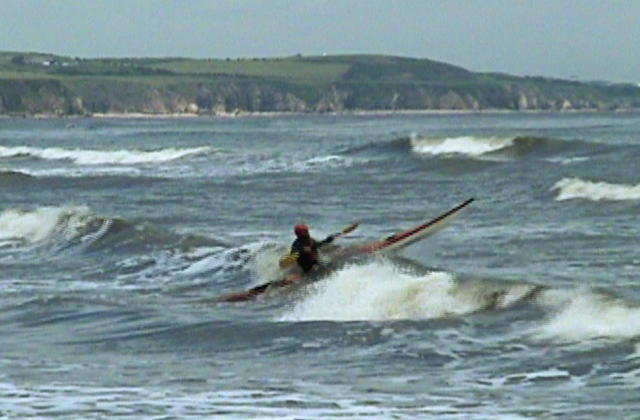 What constitutes "good" surf does depend on the craft with which you intend to ride it - sea kayaks have a faster hull speed than plastic whitewater playboats so will tend to shoot off waves which are perfect for those. There are several factors which govern what the waves look like as they arrive on the shore - the wave height, the wave period, the swell direction, the wind direction, and the nature of the shore itself, which can vary with the state of the tide. If waves are refracting round a headland, the surf will vary along the length of the beach, which has the advantage that board surfers, playboaters and sea kayakers will all find different bits of shore suits them better, which helps to reduce conflict. The above photo was taken on a trip from Blackhall Rocks, moving northwards to a take out about three miles further north. The quality of the surf varied quite a bit over that distance, so it was an interesting trip. More often, we will surf at Saltburn, which is where the playboat photos were taken on a sunny day in August when the rivers were at rock bottom.