Because a paddler in a sea kayak makes very little sound - just a gentle rhythmic splashing of water which differs little from the natural sound of the sea - we are able to get very close to wildlife, sometimes taking it (and ourselves) by surprise very close up. This is great for seeing things you might never see any other way, but is not always ideal for the wildlife itself. You'll also find that commercial wildlife viewing boats don't like kayakers that much, since we can get into shallow water and rocky nooks that the big boats with their paying passengers can never reach, so such boats are not always as considerate towards paddlers as you would hope - something to be aware of in places like the Farnes and Bass Rock.

While numbers are not huge, the summer months see reports of big cetaceans from all around our coast. Sea visitors who sight any of these huge mammals are encouraged to report them via the Hebridean Whale and Dolphin Trust, whose website has a useful list of recent sightings which will give you an idea if Minke Whale, Orca and the like are in the area you intend to paddle. Dolphins are more common and may appear in quite big pods, but Porpoises are by far the most often seen. All of these smaller species are present all year.  As they hunt close inshore on eddylines at the edge of strong tidal streams (they can go fast one way whilst the fish are "conveyor-belted" past them in the other, so they get to see a lot of water for little swimming effort) kayakers often find them popping up close by. They eat well, leaving them plenty of time to indulge their curiosity and play, so they will often come very close to boats, as this big pod of dolphins did. 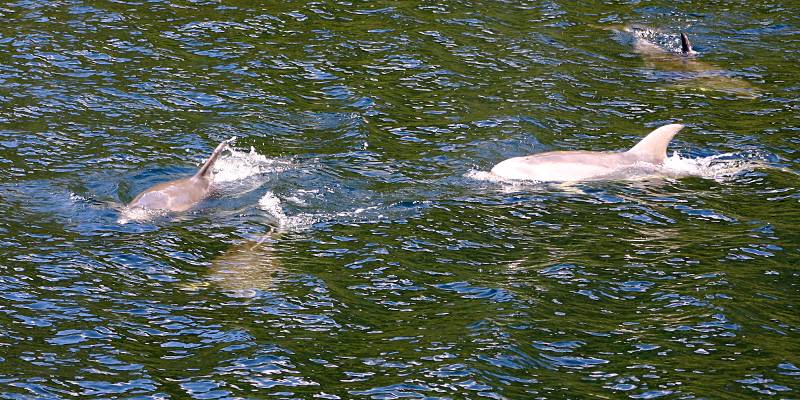 Seals are even more curious, and will often pop up and watch kayakers. Typically they pop up behind you - very hard to photograph, but paddlng backwards can fool them. In some places at some times - such as the outside of Coquet Island and the various low-lying skerries in the Farnes, seals will completely surround our boats. This one was particularly curious about us as we sheltered in a little lagoon between Longstone and the Northern Hares. 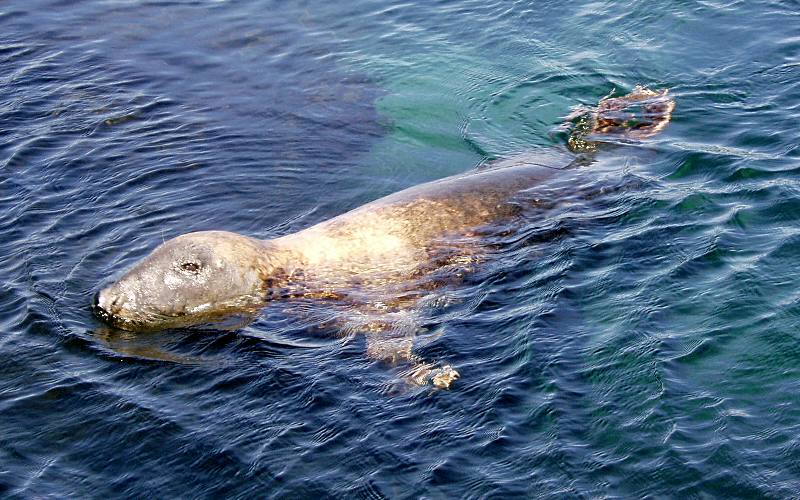 Coquet Island and the Farnes are also good place for Puffins, often flying very low over kayaks on their way back to their nests with an unfeasible number of sand eels in their beaks. This large group were in a raft which we were trying to keep clear of, but we had to paddle inshore to avoid a fast tourist boat and a lot took to the air. 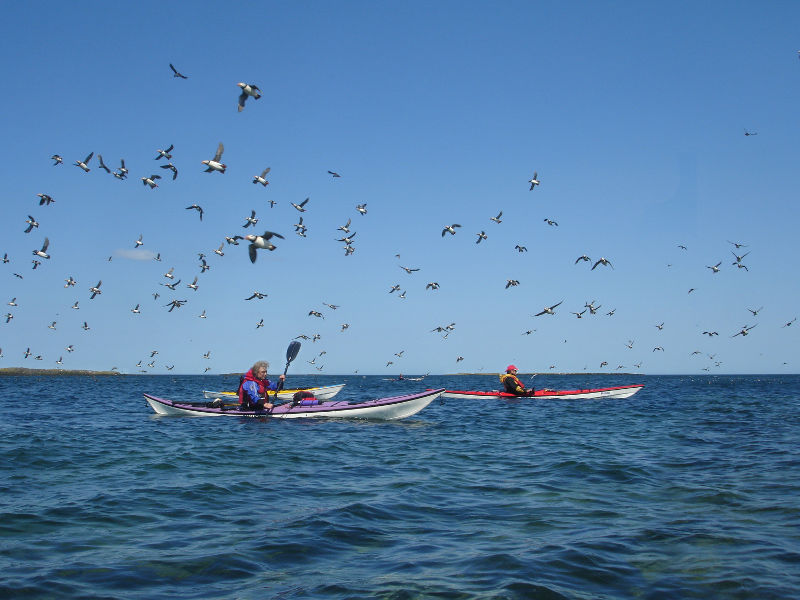 The bottom of the lighthouse on Longstone is a great place for lunch, out of the wind. We had been eating and chatting for several minutes before realising that this eider had chosen the same bit of shelter, right next to the path to the lighthouse, tramped by dozens of visitors every day. She seemed completely unperturbed in her patch of bladder campion among the rocks. 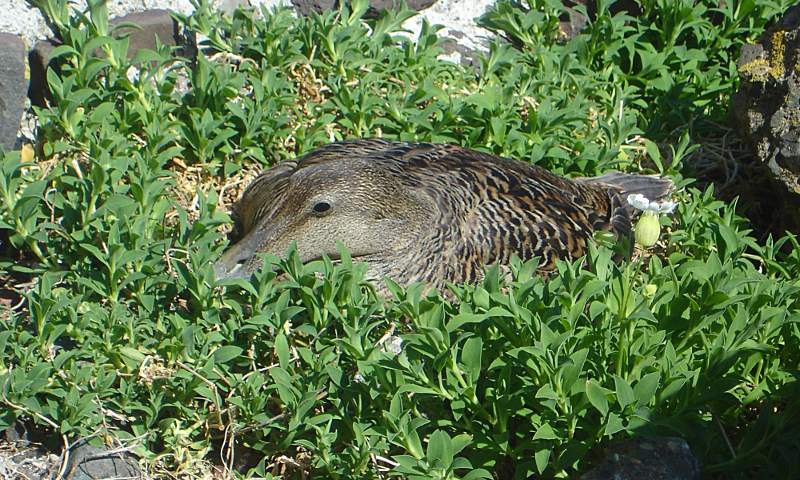 Equally well camouflaged are the nests of shorebirds. This one on Inch Kenneth (off the west of Mull) was seconds from being trodden on as I walked back to camp from a call of nature. Oystercatchers usually make lots of noise to distract one, so it is as well to keep a close eye on where you tread in the popular sea kayaking months of late spring and early summer. Ringed Plovers prefer sandier beaches, and tend to try to distract you with an "I've got a broken wing" act which should alert you to the need to watch out ! 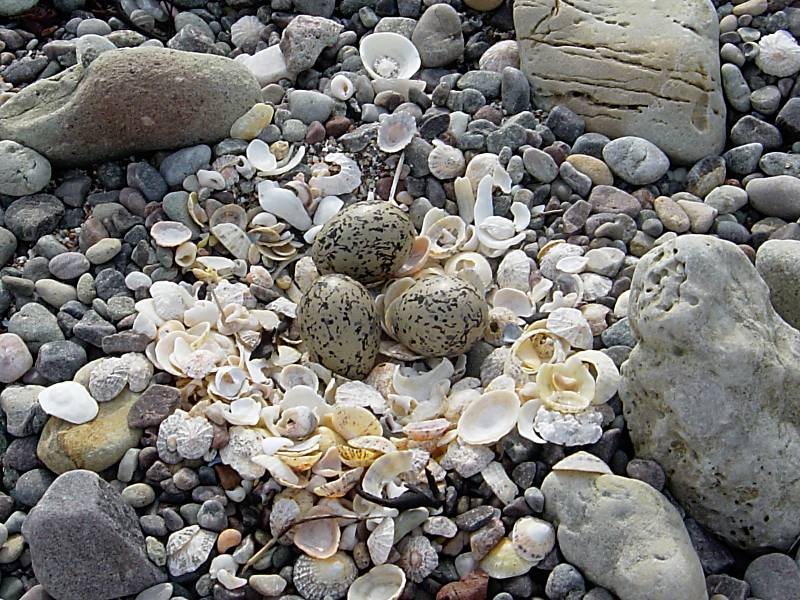 Many of the more exciting sea kayak trips are along wild inaccessible coastline with cliffs. St. Abbs and Flamborough Head are great for cliff birds, but often the North Sea swell can make getting in close difficult. St. Bees doesn't have many of the bigger cliff-dwellers, but the Irish Sea is often calm when elsewhere is too rough. 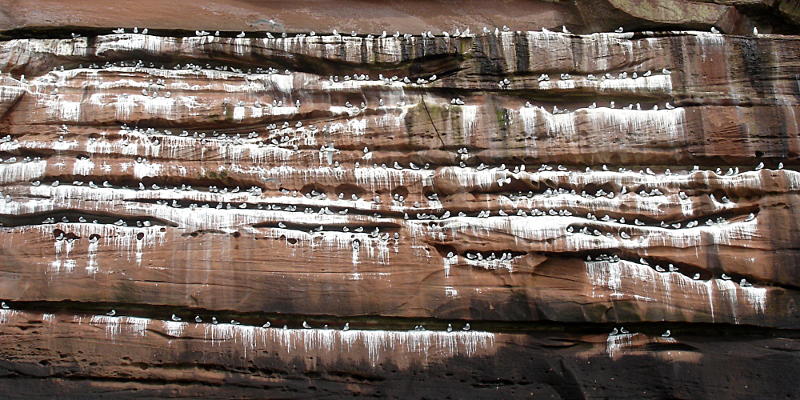 A sea kayak may be an adequate platform for still photography, but video can make your viewers get seasick. As a way to get to the cliffs, however, they are brilliant, and can land on tiny beaches. This video was taken from a convenient big ledge across a zawn to a cliff full of kittiwakes on the club Lofoten sea paddling trip: 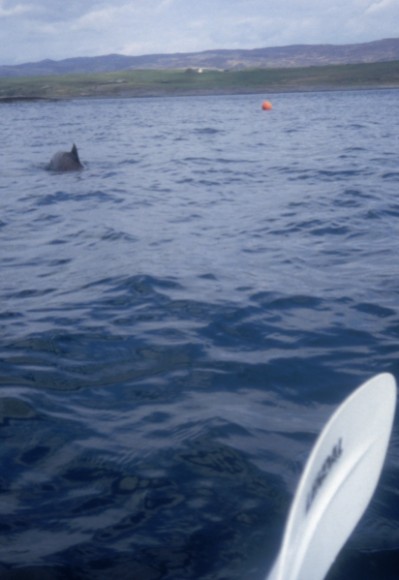 One of the things that hooked me on sea kayaking was the amount of wildlife that surrounded us on my very first camping sea trip, in the Sound of Jura. Porpoises popped up very close, but never in the place anyone was pointing a camera. They don't stay on the surface very long (all the interesting stuff is underwater, so a quick breath and they're gone), so Wendy Bridgstock did very well to get this shot back in the days before waterproof digital cameras. Otters are equally fast and shy, so we often see them (as many as six in one day on trips this year) but rarely for long enough to get photographs... Equally difficult to get good photos are Minke whales which you don't want to get too close to and many species of sea birds that dive as you get close. Some trips have come across Sunfish and and the huge Basking Sharks which do come quite close (but are plankton feeders, so you are quite safe).

Don't forget that there's wildlife on rivers too - whitewater paddlers always see Dippers, Herons and Ducks, whilst Kingfishers, Sand Martins and even Deer are quite often spotted.