Sea kayaking is mostly less of an adrenaline sport than whitewater, though a sea kayak can take you to some exciting places if you so choose, and trips can be plenty committing with remote coastlines and few places to land. SOC do both day trips (most often on the NE English coast, but also as trips out from a base on a longer holiday in Scotland or Wales) and multi-day trips camping from the boats. The boats are very different from the modern plastic recreational and whitewater kayaks that you will see on rivers. They are designed to go where you point them in waves and wind, and not turn readily on a sixpence, though they can be surprisingly manoeverable when you are confident enough to lean them well over and use the tops of waves as a pivot. On the other hand, boats specifically designed for surf are much shorter - the saltwater equivalent of the whitewater paddlers' playboats, but significantly different from them in detail, inspired also by aspects of design derived from surf boards. Surfing in these small boats is a different discipline - usually as a short trip from a handy beach such as Saltburn. Most club paddlers tend to use their river playboats for this, but specialist surf boats are also available. 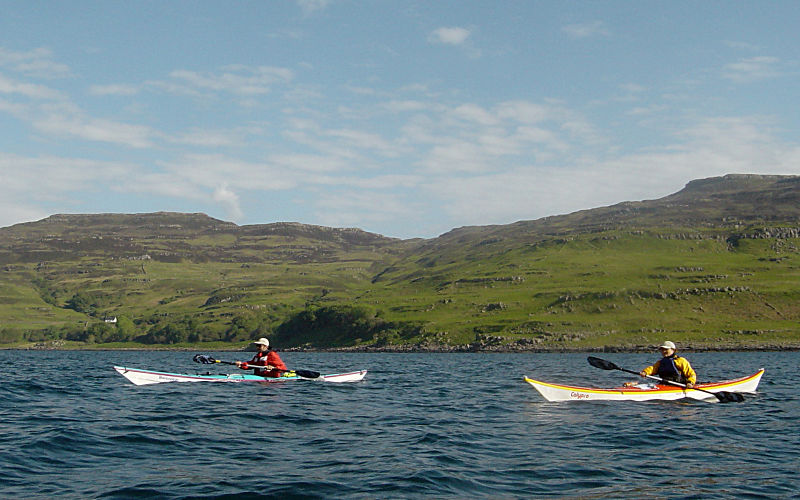 The original kayaks were sea kayaks, of course, evolved over centuries by the Inuit using materials available on the shores of the Arctic Tundra. Driftwood for frames and paddles, seal skin for the covering, sinew for lashings. The designs, whilst obviously heavily influenced by the available building materials, were nonetheless supremely suited to the conditions. Darwinism in action - if your boat wasn't up to it, you died ! 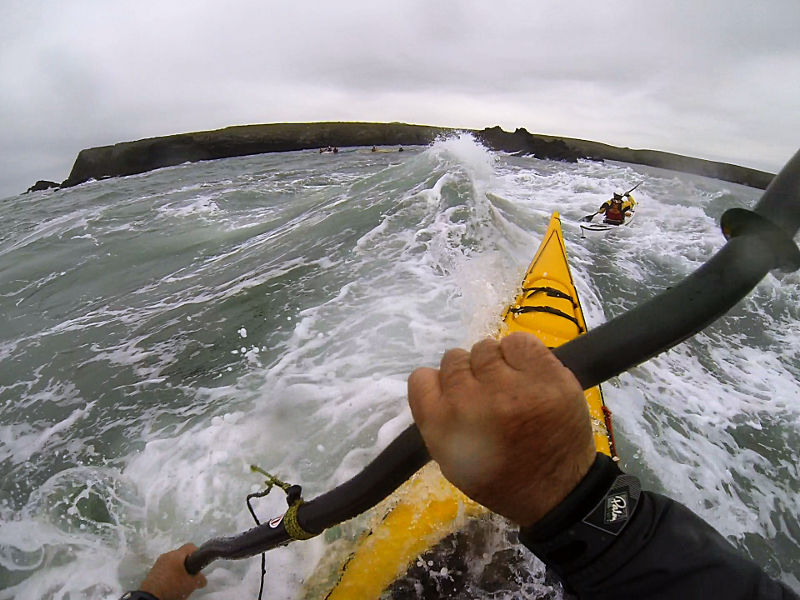 The modern fibreglass or plastic sea kayak owes a great deal to the Inuit including its supremely elegant but functional shape. Especially, for the 'British' style of sea kayak, to designs collected in Greenland. In particular, almost all modern designs hark back to a skin boat made in Igdlorssuit for Ken Taylor, who brought it back to Scotland. This most directly evolved into the Anas Acuta, an elegant but fairly narrow boat based on a plywood adaptation of Ken Taylor's boat. The club had an early Anas, recently modernised with bulkheads and hatches. It is a supremely seaworthy boat, and great fun in the rocks and surf, but doesn't have the volume for multiday camping trips. Unfortunately, to make space for some more modern boats better suited to these longer trips, in 2018 this was sold.

From the Anas evolved other designs such as the Nordkapp, for long expeditions in rough seas, and definitely not a boat for beginners. But from a desire to introduce new people to the sport in a teaching context, more forgiving designs evolved. Many SOC members have boats designed by Mike Nelson (an SOC member on and off) as North Shore Designs. The club for many years had a Calypso II double sea kayak made by North Shore. As you can see, the double is particularly good for seeing wildlife, as the front paddler can take photographs whilst the paddler aft keeps control of the boat. See Sea Kayaking for Wildlife. The boat was too long for any available store at the clubhouse, and has now been replaced by an Aleut II which takes apart into two halves - not only does this mean we can store it in Richmond, but it also fits on smaller cars.

Recently, some of Mike Nelson's designs have been made by Valley Canoe Products alongside the Anas, the Nordkapp and more modern boats, and this has meant that some of his designs are available rotomoulded. We now have two plastic North Shore Atlantics for the club which are a little heavier than their fibreglass ancestor, but more resistant to impacts when rockhopping. For many years, the other major UK suppliers were Nigel Dennis (nowadays called "Sea Kayaks UK") in Anglesey and P&H whose plastic boats are blow-moulded rather than rotomoulded. NDK Romany and P&H Capella boats have some following in the club, but there are also now a number of newer manufacturers in the market, so there are lots of designs to choose among. For more information on these and other boats you might try, see Some Sea Boats to Try. For the ultimate in custom-fitted design, it is perfectly possible (though very time-consuming) to build your own sea kayak to exactly the size and design you want, and there are some very elegant and high performance designs out there...

The pages in this section are intended to give you an idea of why we go sea kayaking, where we go sea kayaking, and how we go sea kayaking - what equipment is needed for day trips, weekend camping trips, and for longer expeditions. A small number (on any one night) of sea kayaks are also welcome at our pool sessions, details in the river paddling part of the site.

For some examples of the trips we do quite often, see some of SOC's Favourite Sea Trips. You'll also find lots of information in the Previous Sea Trips section, and many of those articles link to Additional Notes pages which give a lot of detail of the planning that goes into the trips. For days at the seaside, see our Surfing page.