This is a work-in-progress, but has had its status set to "published" as I hope it already contains some useful information and may prompt members to ask more questions. Since it will need quite a lot of illustrations, it may well extend to several pages before it's finished !

Hydrology is a fascinating subject and one that cannot really be avoided by the paddler (or caver, for that matter) wishing to remain safe and have an adequate level of adrenaline / entertainment. The availability of recent gauge data for a lot of rivers in England, Wales and Scotland means that we can have a much better idea of what a given river might be doing, before leaving home. But the gauge data are typically a few hours out of date by the time we arrive at our chosen river and it is useful to have an idea of what is likely to happen and how the levels might evolve. If you start to look into the subject, you realise that most of the literature is concerned with predicting the size of infrequent large floods, and with modelling low flow conditions to ensure that there is adequate pubic water supply. The reader is soon bombarded with a plethora of arcane acronyms like QMED, POT, MAM(7) and many more. Whilst its interesting to find out what these all mean, paddlers usually want to address some more directly relevant questions.

Why do some rivers seem impossible to catch at a good level ? Why does the river come up so fast, but drop off more slowly ? Which rivers will run if it hasn't rained this week ? What do the reported gauge levels mean in terms of actual paddling ?

There are innumerable factors which govern how a river will rise and fall when it rains. Rivers whose catchment area is characterised by many tributaries a short distance away (a near-circular area) will rise (and fall) a lot quicker than rivers with a similar area of catchment but which run in long, narrow valleys - simply because it takes longer for the water to arrive. Rivers will also rise and fall more quickly if the catchment is steep, or has little soil. Rivers fed by gently rolling moorlands of deep spongy peat will rise and fall more slowly than those fed by run-off from boulder fields and shallow soils, but peat moors may have been "gripped" to improve the pasture, and these drain much more quickly. Moorland gripping was responsible for a change in the character of the River Swale, causing it to be much flashier, with higher, but shorter-lasting flood peaks. The policy of government (which made grants for the cutting of grips in the first place) today is to encourage the blocking of grips to reduce the flood risk, so we may look forward to the Swale remaining paddleable for a little longer after rain, and the Mercury Bridge in Richmond not being washed away as part of it was in June 2000.

Why do rivers rise faster than they fall ?
When water levels rise, the river flows faster. This means that as rain continues to fall in the hills at the top of the catchment, the later rainfall is able to catch up with the slower-flowing water downstream. As the level drops, the water flows more slowly, so water draining from the soil after the rain has stopped makes its way downstream more slowly, so that its arrival far downstream is later. This produces a characteristic shape in the flood hydrograph where a rise in level quickly becomes steep, the curve then being convex and reaching a peak. The level then tails off more slowly in a curve which is concave upwards, this decay lasting many times as long as the initial rise. An important consequence of this for paddlers is that further rain in the catchment of a swollen river will make it rise more quickly than a similar amount of rain on a river at a lower level.

Free-flowing versus lake-fed
These two annual hydrographs (sourced from the Centre for Ecology and Hydrology Website, which houses National River Flow Archive data) are for two rivers quite close to each other in the Lake District, with very similar catchment areas (both 73 km² at the gauges). 1990 is the most recent year for which both have data available. The Kent has mostly free-flowing tributaries, whilst the Crake is fed by the outlet of Coniston Water, a large lake. There are a number of points to note. Firstly, the peak flood flows of the Crake are a lot less. Since erosion depends mainly on the magnitude of high flows, the Crake ends up being a smaller river than the Kent, despite having similar catchment area and rainfall. This means that it is runnable at a smaller minimum flow. Secondly, the Crake reaches its peaks after big rain events, only a little later than the Kent, but the flow rate decays away much more slowly. These two factors combine to mean that the Crake is paddleable much longer after rain than the Kent, despite the Kent's good reputation for being a good run when other rivers are low. Thirdly, the rise in level on the Kent comes more quickly, and goes up by a bigger factor for the same rain event. In fact, this effect is bigger than the graphs show, since these are just gauged daily mean flows, and the peaks may last only a few hours on the "flashier" river. Since the levels change more slowly on the Crake, the highs of daily mean flow are closer to the true peak flows during that day. This means that however bad the weather, you are a lot less likely to find the Crake rising dramatically after you have put on. Freer-flowing rivers can not only rise quickly, but change level very significantly during the course of a trip. 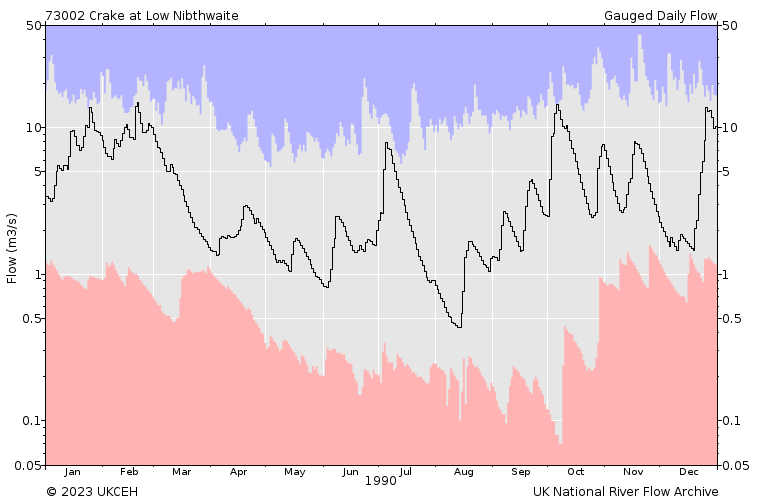 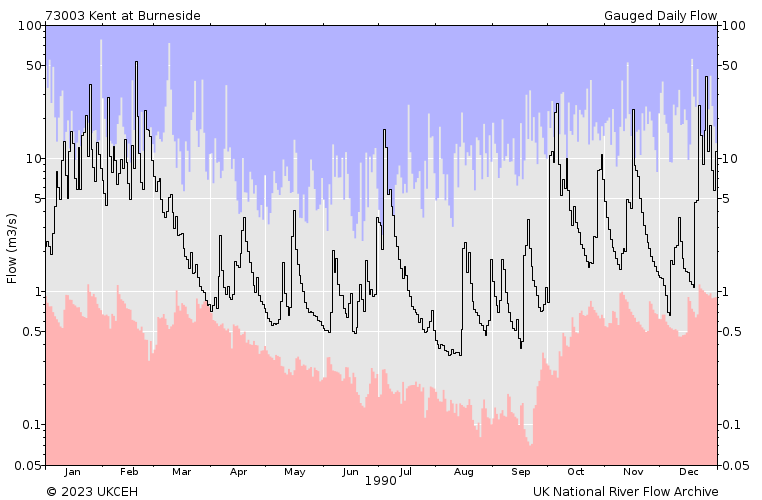